The R18 Transcontinental and R18 Bagger have been getting a lot of attention lately, as BMW‘s foray into large-displacement cruiser touring segment. Getting somewhat lost, however, are BMW’s existing K1600 range, which used to be the company’s representatives in the touring category. While still part of BMW’s lineup, the six-cylinder models have not been updated since the 2017 model year, not even receiving any changes to meet Euro 5 standards that came into effect last year.

BMW may be about to rectify the situation, as we expect a new K1600GTL, K1600GT and K1600B for 2022. The information comes to us via German certification data which confirms new, lower emissions numbers for the three models (the fate of the K1600 Grand America, however, remains to be determined.) According to the German certifications, the updated K1600 models produce the same claimed power output of 158 hp, but significantly lower carbon oxide and hydrocarbon emissions, as the current engine.

The German document doesn’t offer any clues about other changes, but we’d be surprised if BMW didn’t also give the updated K1600 models the latest technology, including radar-based cruise control and a 10.25-inch TFT display. 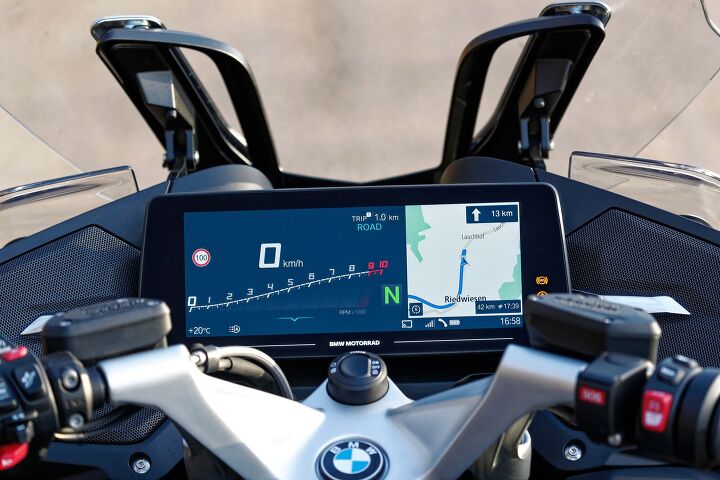 Updated K1600 models would be prime candidates to receive the 10.25-inch TFT display pictured here on the BMW R1250RT.


We also don’t know when BMW will announce the updated K1600 models. The manufacturer previously announced an indefinite withdrawal from the industry’s two largest trade shows, the annual EICMA show in Milan, Italy, and the biennial Intermot in Cologne, Germany. BMW will instead focus on online presentations with appearances at regional shows.

There are signs that a K1600 announcement is imminent, as BMW’s official websites for Belgium, Greece, Luxembourg, Portugal and Switzerland have subtly changed the URLs for its K1600 model pages, adding “-2020” to the end of the links.

This kind of change suggests BMW is preparing new pages for the updated models with the old links. It also suggests that the bikes will stay with the K1600 branding, meaning the engines will remain close to their current 1,649cc displacement. According to the Internet Archive’s Wayback Machine which captures regular snapshots of websites, the old URLs were active as recently as mid-July but they now result in 404 Page Not Found errors.

We expect BMW will release some information soon, possibly as a social media teaser campaign. We’ll have more information on the updated 2022 BMW K1600 models as it becomes available.