TWO TO THE LEFT

Rock strewn uphills are my downfall on the kaf.

Wait til you get to Vancouver. The price today is an eye watering 2.16 - last week it was 2.39. That most likely means it will be around 2.50 soon. It sawtooths its way higher and higher.

Location
Not disclosed (anymore, so F-off.)

Well, we DO have standards, ya know! 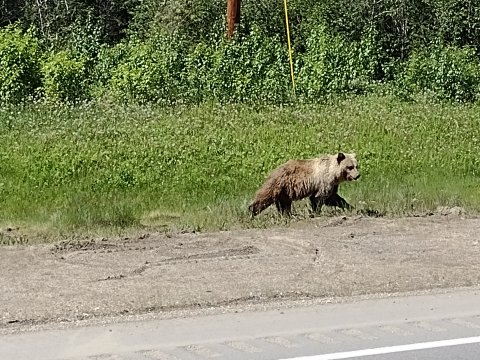 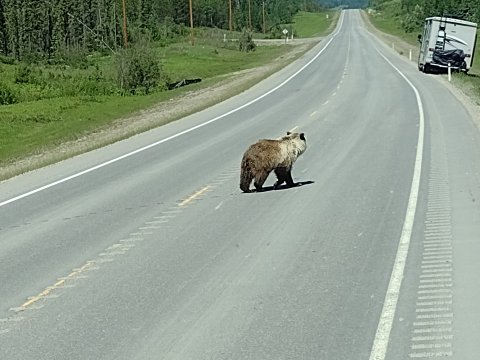 Grand Prairie is big into resources. Oilfield services abound, and there's millions of board feet of lumber at the mills.

I bought thick socks and a blu ray player.

Blue Ray is dead on the vine.
OP

It is now three to the left, time zone wise. Pink Mountain, British Columbia is in the Pacific time zone. I'll be zoned out completely in a few days when we hit Yukon territory, it's mountain standard time there 24/7/365. We didn't see much along The Alaska Highway, just a young elk. Sucky pic, yeah 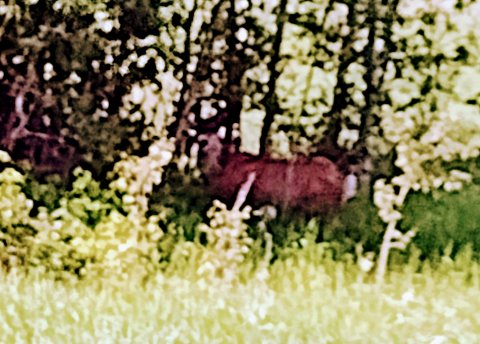 We missed getting a pic at Mile 0 of the Alaska Highway thanks to crappy gps, by the time we realized we'd been routed around downtown Dawson Creek, we would have had to backtrack more than a dozen kilometers. Screw that.

The SIL and her hubby took some of the Old Alaska Highway, they saw a mountain lion and a marmot. There was a bridge being repaired so they had to u turn back to the main road

Went for a walk after the thunder/hailstorm, lots of mosquitoes. Wish the magpies would eat them all.

9:40 PTD now, sky is bright blue with fluffy clouds to the east, another dark storm/ maybe hail cloud is approaching from the west . The clouds come every night, very few stars to be seen even if I wanted to stay awake past midnight when it's dark enough to see stars
Last edited: Jun 26, 2022
OP

At least the sunset is a bit colorful. 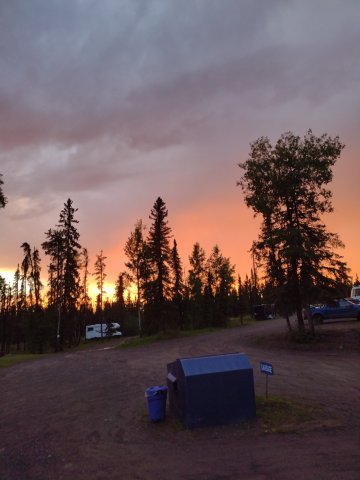 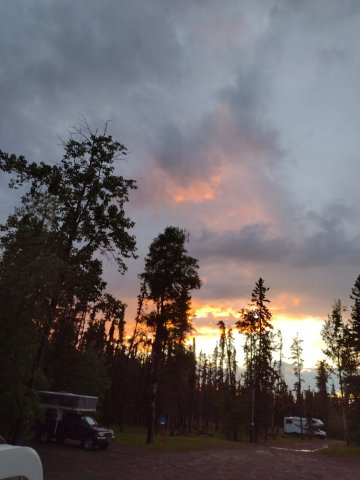 tinhead said:
None will be left behind to keep the glaciers going, the expectation is that they will all vanish in eight more years.
Click to expand...

That's what the News was parroting back in 2008, when I made my wife go with me on the Goldwing all the way to Glacier. I wanted to see the glacier before it was gone. 14 years ago....

Seems I'll have a few more years to see it before I'm gone.

(Maybe the Glacier Park is hyping it all up to increase their tourist visits. "See the glaciers before they're gone!!

Never heard back from you via PM...

Muncho Lake. No cell service, WiFi slow so no pics. Pity as this is a really beautiful place. The seaplanes are nice looking.
OP

Weather has been short sleeves and shorts, some thunderstorms around today
OP

Laird Hot Springs is an invigorating experience. That was the morning, afternoon was spent on the kaf, there are some nice off-road trails around here. 998 km on return, the 1000 km service was performed by yours truly.

Then an 8 PM wildlife roadhunt on the kaw. Red squirrel, bighorn sheep, bison, a moose, and porcupines.

There was a kicker thrown in, we were headed to Watson Lake, Yukon tomorrow. The Alaska Highway is closed just south of the Yukon border. A culvert washed out, 2 days is the repair estimate. We'll wait it out, as the detour to Watson Lake is over 2000 km.

Camped in Laird Springs provincial park for two nights. Last update was a detour will be constructed around the washout and usable in "a day or two". 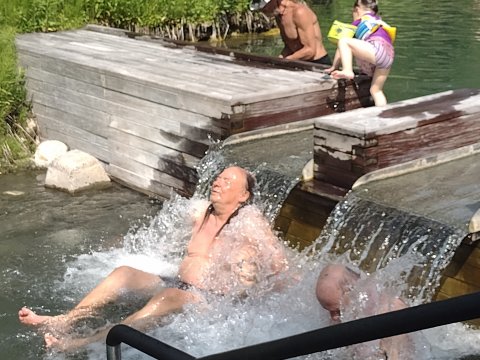 We'll get by somehow. 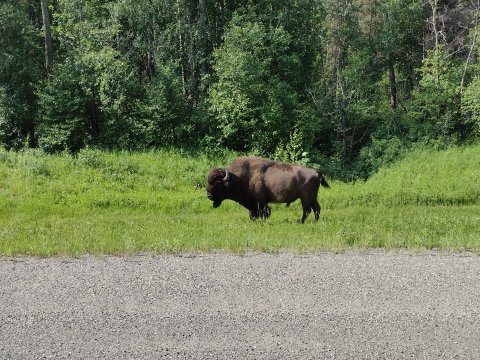 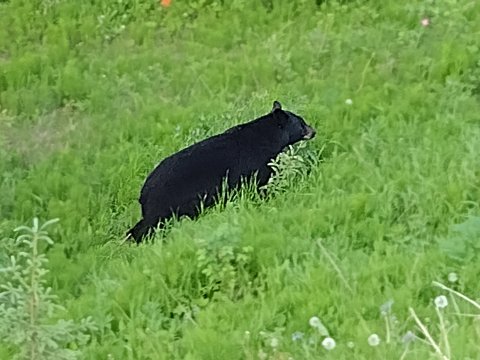 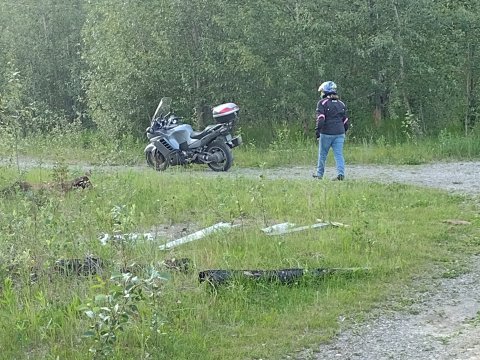 Let's get a room 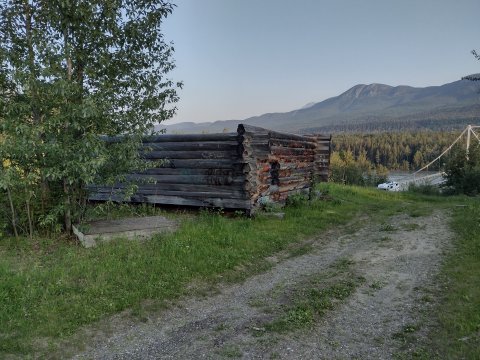 Finally got a red squirrel pic after the 9 PM dip in the hot spring. The little bastards want all our food but don't want to see us. 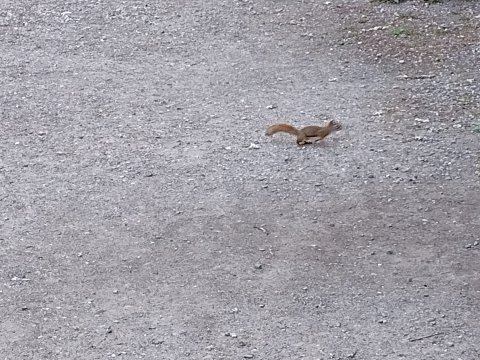 Say hello to #3. This guy has a GPS collar and ear tag, doesn't seem to piss him off much. 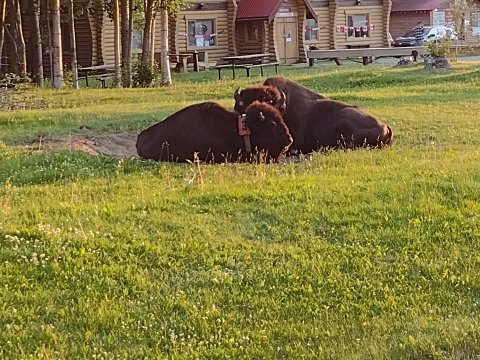 Buffalo have been taking care of business in Yellowstone.

...that is mostly evolution in action...

Has never sold a motorcycle

Hapo said:
...that is mostly evolution in action...
Click to expand...

In the Yukon, Watson Lake. The Alaska Highway washout was repaired for traffic, there isn't ever a lot. This RV park has internet 30 minutes at a time. Progress happens slowly in The North.
OP

The plan to go up the Klondike Highway to Dawson City and then drop south to Tok in Alaska died thanks to road conditions. Presently in Johnson's Crossing at the north side of Teslin Lake, going to stay the night. There's a pretty bridge I might post a pic of someday.

Link to the washout story 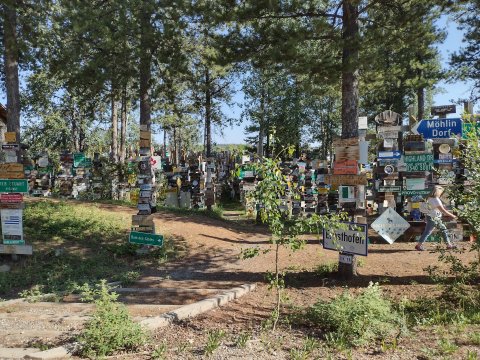 The license plate forest in Watson Lake, the first one went up when the road was built back in the '40s, near half a million now. Plus 2 today.
OP

Haines Junction, Yukon, posting from wifey's fone. Because there's no internet. No credit card transactions, we had enough foresight to have enough cash (loonies) for gas and the campground. The story was it isn't caused by the George Soros globalist enslaving us, or soup stealing truckers bitching about having to show papers at the border. Just a careless construction crew that cut a cable.

The new wildlife spot yesterday were the wild horses kicking up some dust by the roadside. 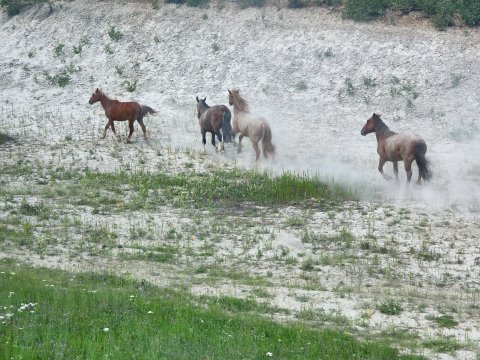 In Whitehorse, the Wal-Mart and grocery store trips took over two hours. Quantities rationed because of the recovery from the Alaska Highway closure, long lines because of the new cash only situation. Starbucks in Whitehorse closed up completely, they can't survive without yuppies paying by fone. Their business model needs internet.

Go to the Tim Hortons, better food and no attitude.
.

Go to the Tim Hortons, better food and no attitude.
.
Click to expand...

^^^^^ This statement is factually incorrect.

...I see why they call the place Whitehorse...nice shot...
OP

The Alaska Highway from Destruction Bay to the Alaska border is absolute crap.

) is dirt with 2 inch washboard. Less than 25kph stretches for minutes on end. 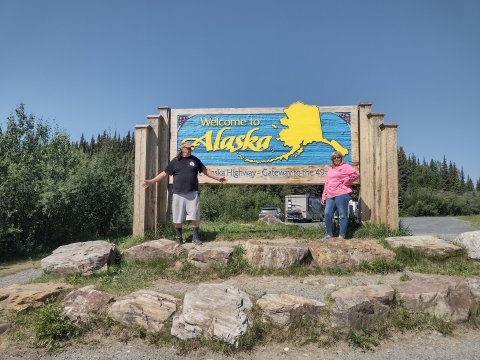 We were damn happy to see this.
OP 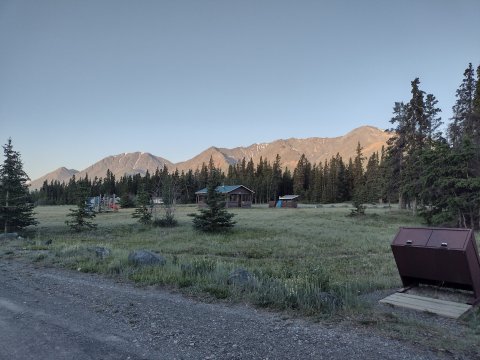 Sunrise walk at Conger Creek campground. We're almost used to seeing scenes like this around every bend. Almost 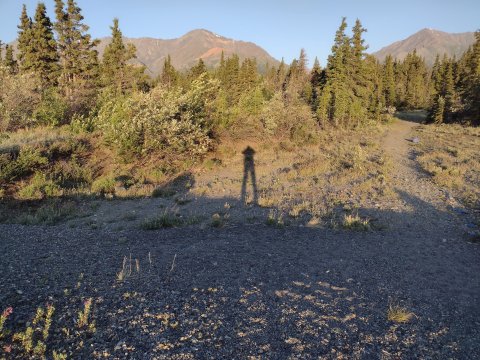 A really nifty memorial between Destruction Bay and Burwash Landing 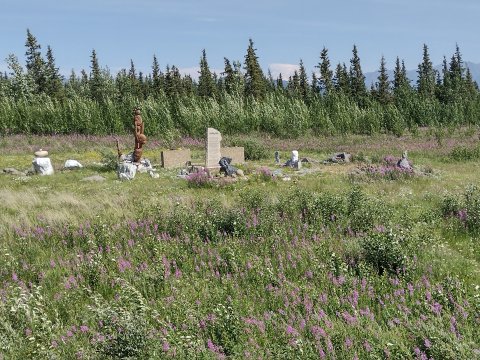 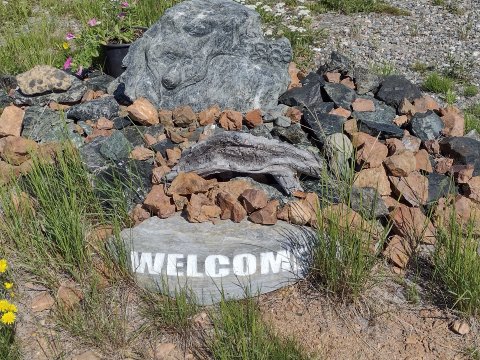 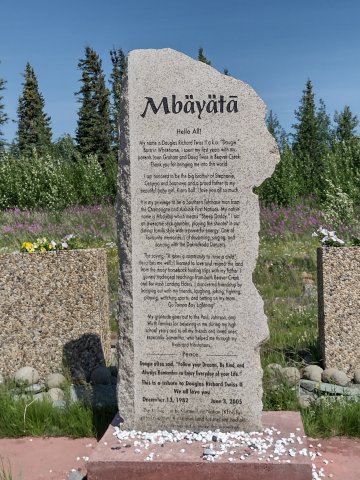 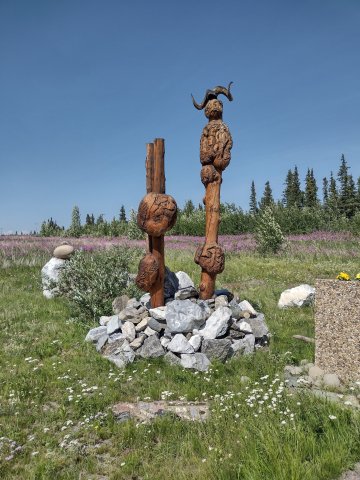 I never knew Caterpillar made bulldozers that run on gasoline. 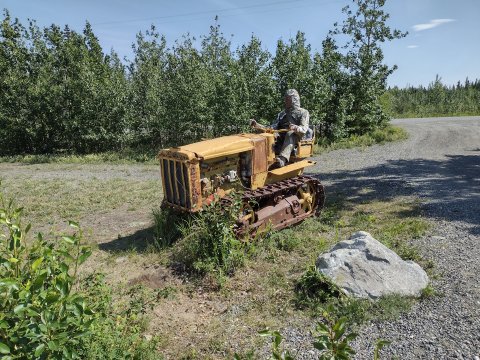 We were goofing with three gray jays after dinner around the campfire. 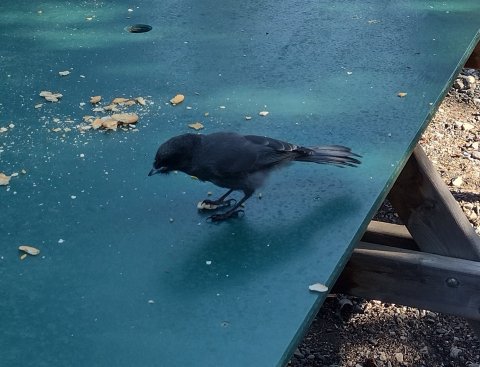 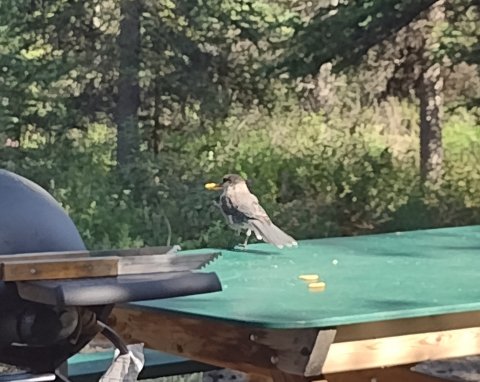 Wait until you meet the ravens more in the interior of the state.

They are more characters than the crows we have down here.
OP

tinhead said:
The ravens are to crows as humans are to chimps.
Click to expand...

I've had some verbal exchanges with ravens and I'm certain we had a very good understanding of each other.

I'd probably have one, if they didn't shit everywhere so much.

It's magic how a crow, or raven can turn into an ink spot in the sky when shot with a 3000 fps hollow point.

Snail said:
It's magic how a crow, or raven can turn into an ink spot in the sky when shot with a 3000 fps hollow point.
Click to expand...

OK, so how do the birds offend you? Or is it just you lust for killing animals?

...they would put in in jail for killing people...

The knock down swallow nests and eat the fledgling babies. I like swallows, I have thirty swallow nests inside the overhangs on my shop.

Thats why. Yesterday I found three nests broken with one baby struggling, and dying.

Don't fuck with my swallows. I have two types, Barn and Cliff. In the spring I run a hose on loosened clay soil for their nests. They come by the hundreds (seriously) every year.

...the Barn Swallow would be my pick for favorite bird if I had to pick one...

The Swallows don't mob the crows and drive them off?

There aren't crows around my place, they prefer urban environment. The ravens attack the swallow nests and take flight with a swarm of swallows in pursuit. The swallows try.

Like Kirk guarding the sheep, Boomer Homophobic guards the swallows.
You must log in or register to reply here.
Top Bottom