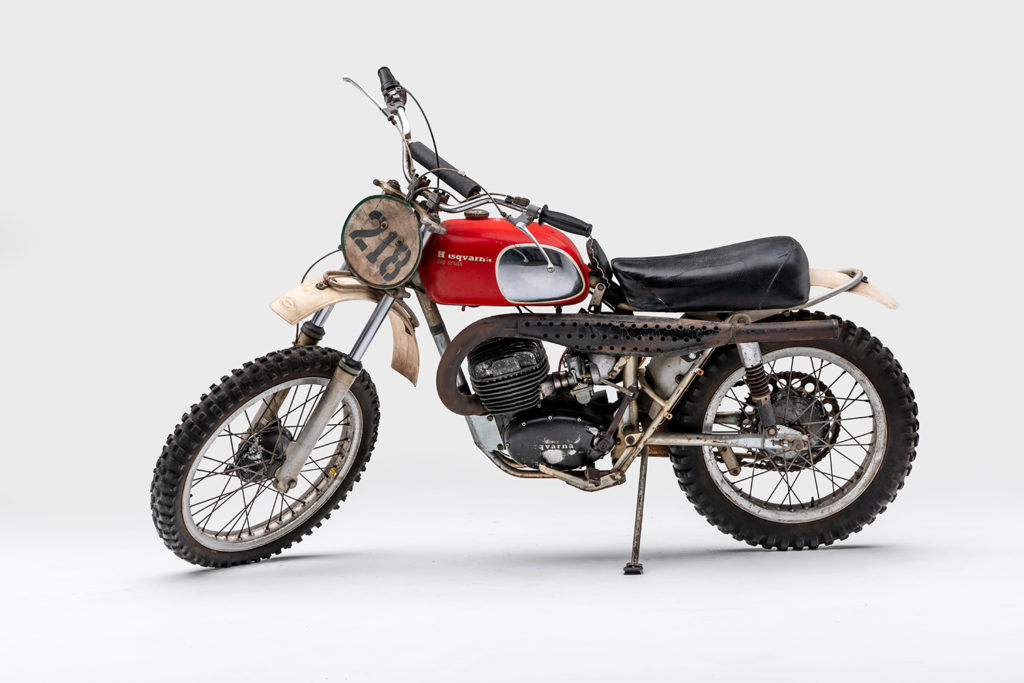 For a while there, 50 years ago, Husqvarna was perhaps the best-known and most desirable dirtbike in the world. They were good enough bikes — I owned and tested them in the day — but fame earned in the hands of Baja racer and ISDT gold medalist Malcolm Smith, and their use by actor Steve McQueen, exposed and validated the bikes to more people through the movie On Any Sunday than probably any amount of advertising or editorial coverage could accomplish. Whereas magazine tests and race results reached readers hungry for the latest news about the latest products, such impressions often vaporize when the next generation of products arrives. And from the mid-1960s onward until the modern 4-stroke dirtbike era, those changes were relentless.

What the movie actually did for the Scandinavian machines was far deeper, what scientists would define as “imprinting.” In 1935, Austrian zoologist Konrad Lorenz noticed that goslings (newly hatched geese) would memorably imprint on the first living animal they saw, whether that was Mother Goose or a person. This imprint became lifelong, the same powerful imprint that Husqvarna’s heroic and emotional appearances in On Any Sunday created for kids and young adults at the time. And so, all these years later, the effect Husqvarna — particularly the twin-shock, chrome-sided tank models with the aluminum fenders — has on legions of middle-aged men is real, bordering on mental. 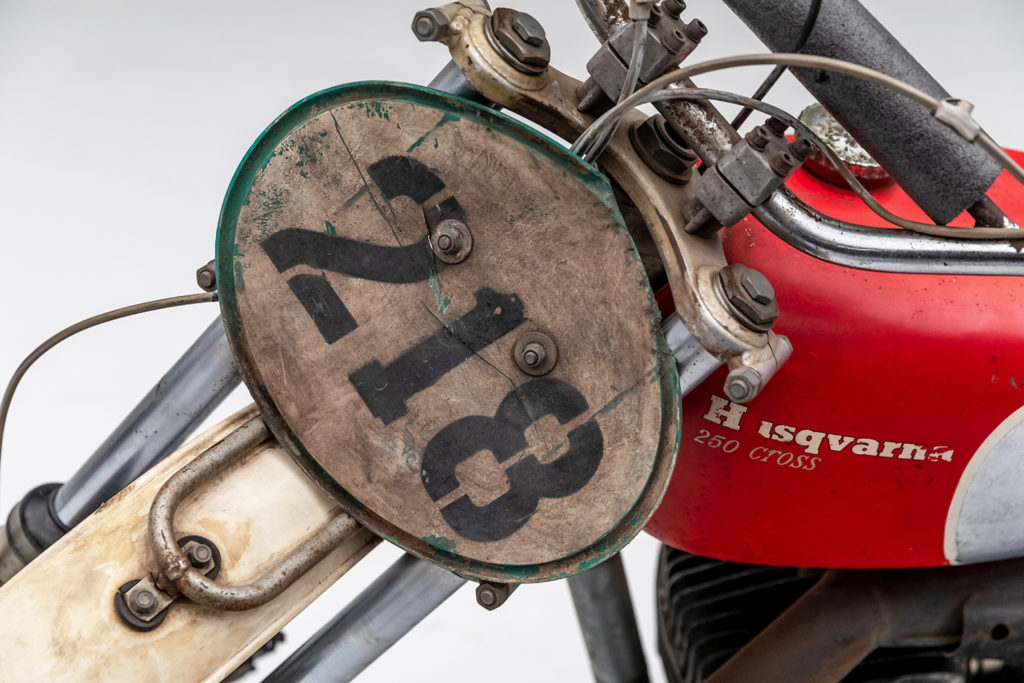 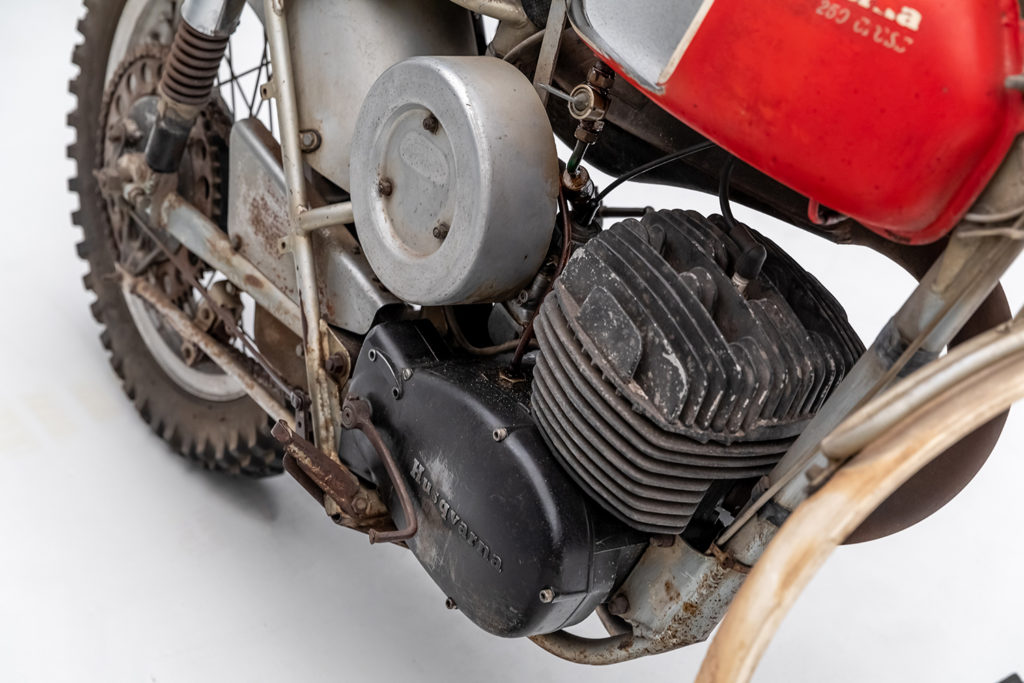 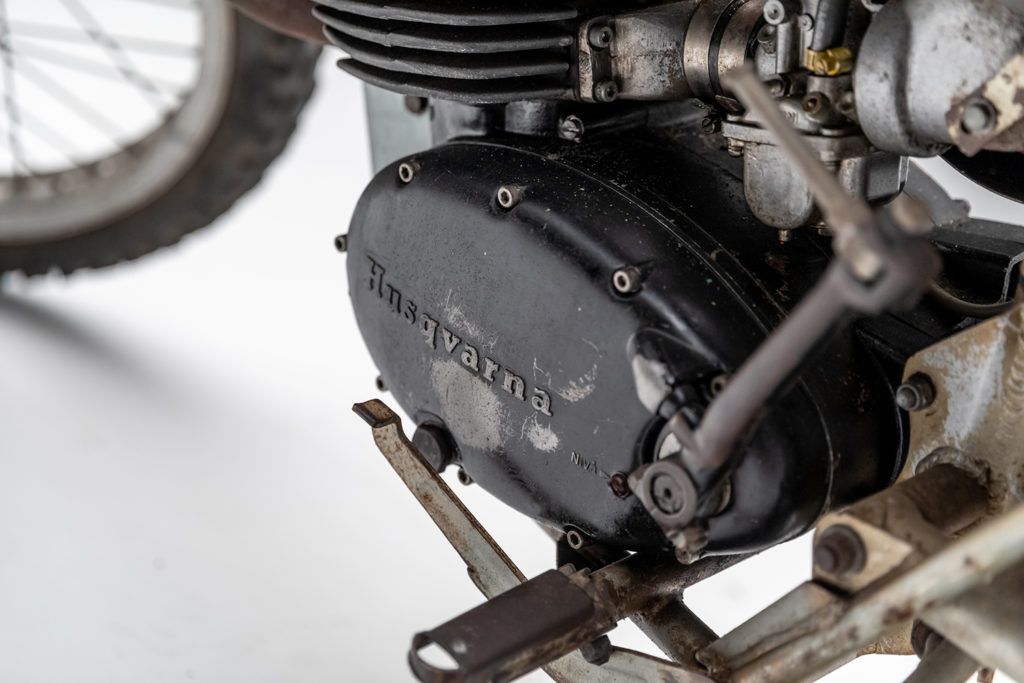 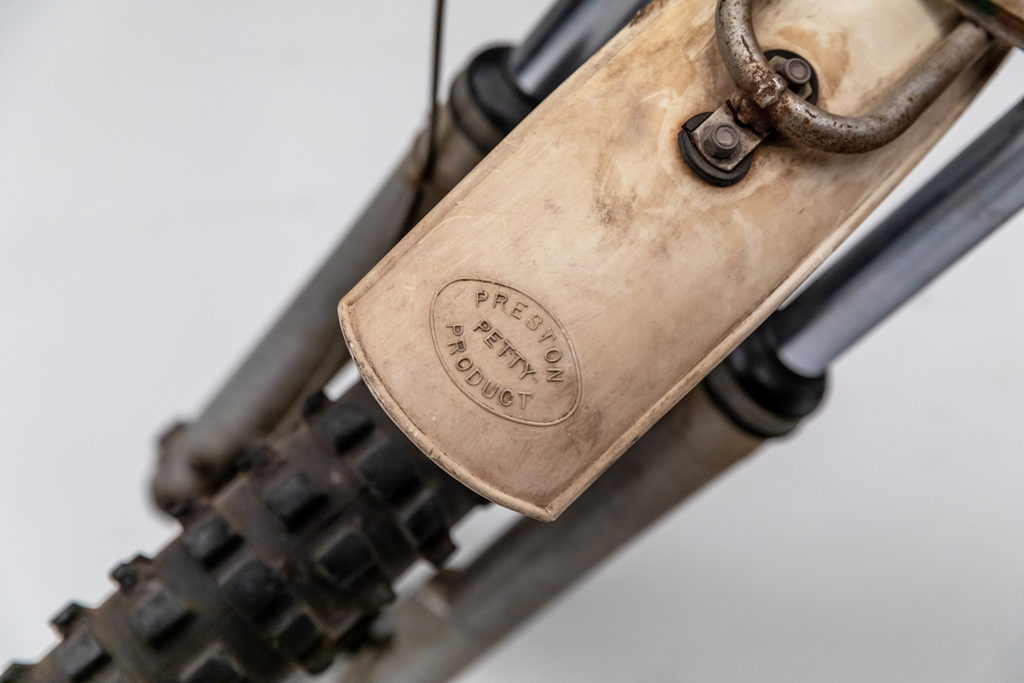 With its hand-stenciled number plate, scuffed finishes, and weathered patina, Bruce Brown’s 250 Cross tells a story of competition and heavy use, and it helped make Husqvarna famous in America. Its air-cooled 2-stroke single and bolt-together frame were simple but durable. Brown replaced the original metal fenders with lighter, flexible plastic fenders made by Preston Petty Products.

How did Husqvarna of far-flung Sweden — the land of reindeer and icy fjords — find itself in the right place at the right time? Maybe it was serendipity, since in 1953 the company produced its first purpose-built enduro, the Silver Arrow, featuring an upswept exhaust and high-mounted fenders to idealize the bike for trail use. Presciently, Husky likewise pioneered a 500cc 4-stroke for FIM motocross competition in 1958, but that model had a short lifespan. 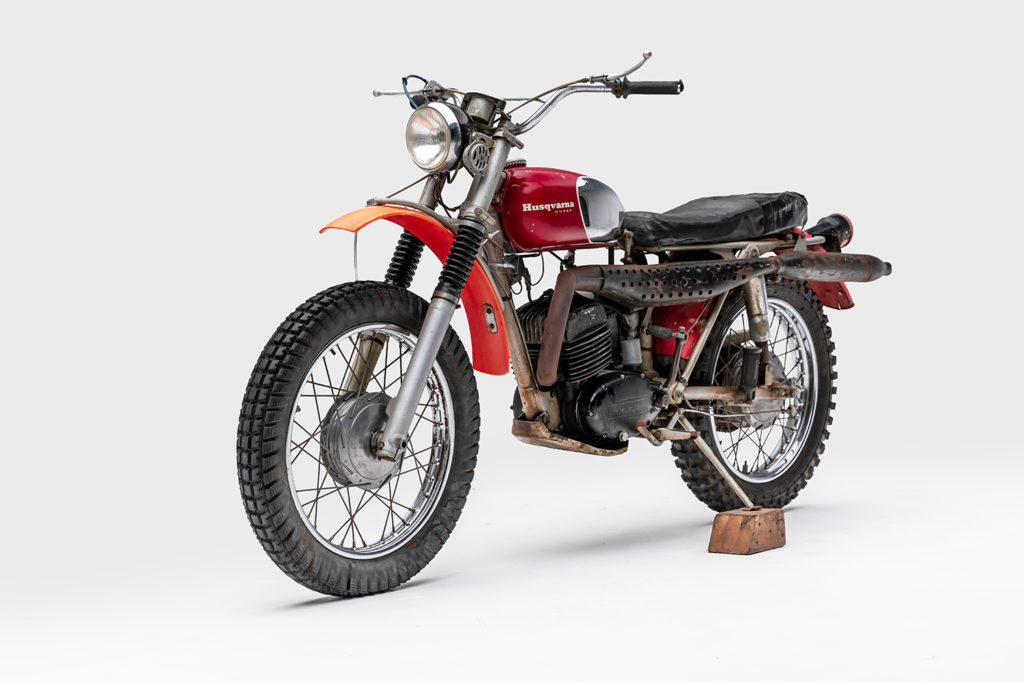 Featuring lights, a horn, a speedometer, and a California green sticker, this 1967 250 Commando (VIN 167038) dual-sport was the first Husqvarna owned by Steve McQueen. Like Brown’s 250 Cross, it has been preserved in its original, unrestored condition, with a battered red-and-silver tank, a rusty exhaust pipe and a taped-up seat.

From there, a few more years of development finally produced a 2-stroke production motocross bike fit for America. Motocross had just come here by way of California in 1965, thanks to West Coast roadracer Wes Cooley, Sr., who discovered the fledgling sport while in Europe. After returning home, he organized the first known sanctioned MX event in this country, an invitational at Castaic near Los Angeles.

“When Wes called to announce the race, most of us said, ‘What?’” laughed AMA Hall of Fame member Mary McGee. “Even so, 45 of us, mostly desert riders, showed up.” McGee rode that event, although on a Triumph twin desert sled and not a Husky, making her America’s first female motocross racer. Then Cooley repeated in 1966.

“This was the first U.S. motocross race for Husqvarna, and also the first U.S. race for Torsten Hallman,” McGee added. Hallman would ultimately win six 250cc world titles for Husky and was atop his game in ’66. “Now there were close to 60 riders, but everyone had their eyes on Torsten. He and the Husky together made a huge impact. Mostly because Torsten was so bloody fast, but also because the Husky was a proper motocross bike — it was so beautiful compared to looking at a big, huge Triumph, Matchless, or AJS. That reverberated fast through the manufacturers.” 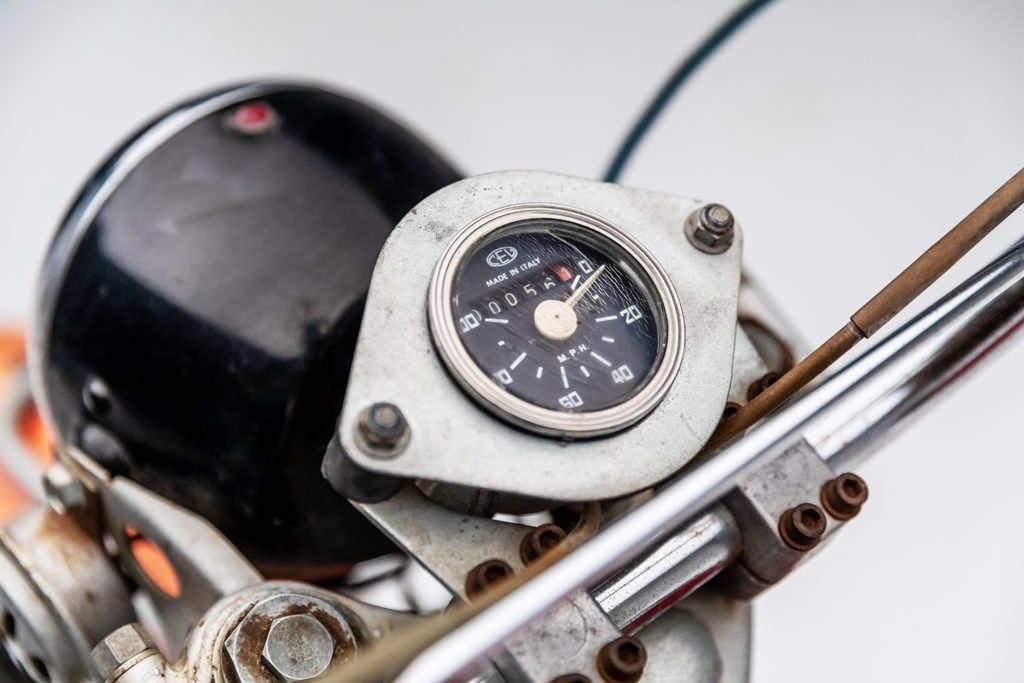 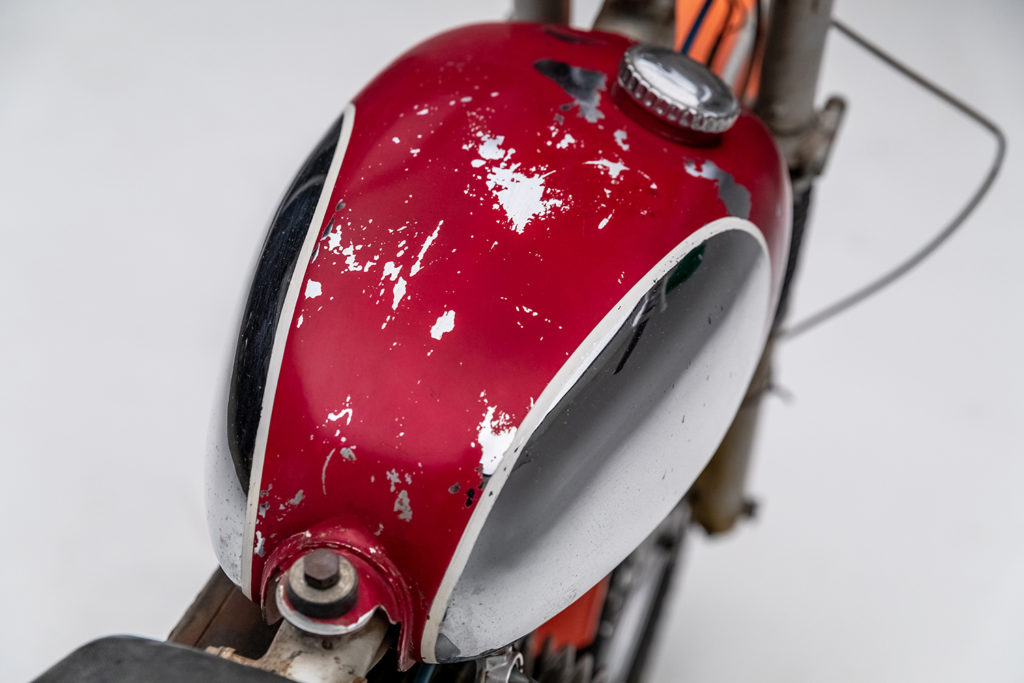 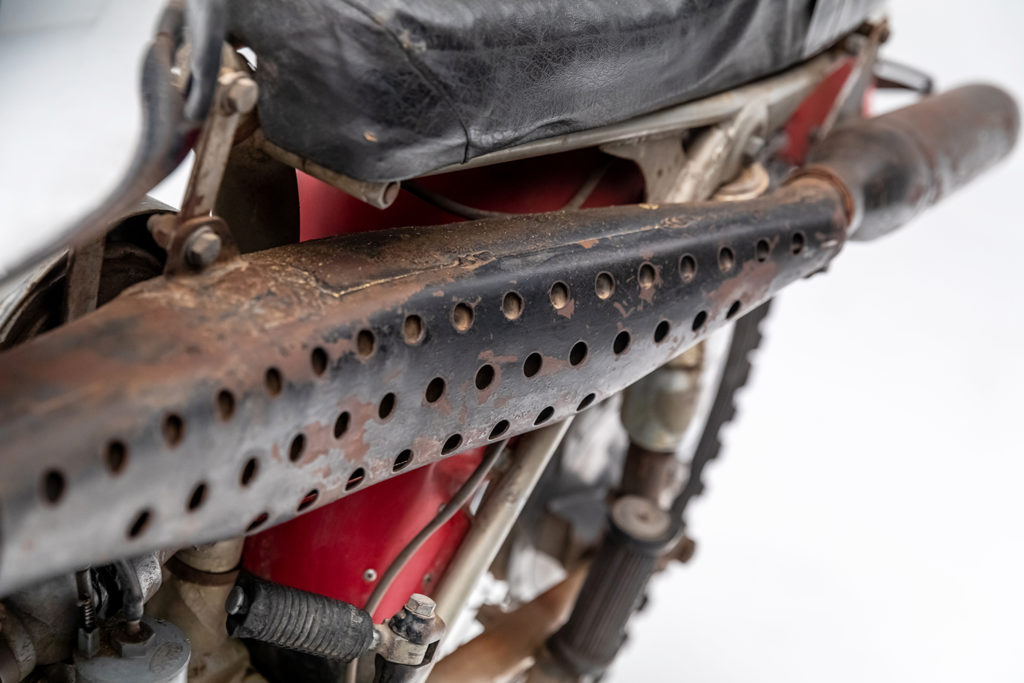 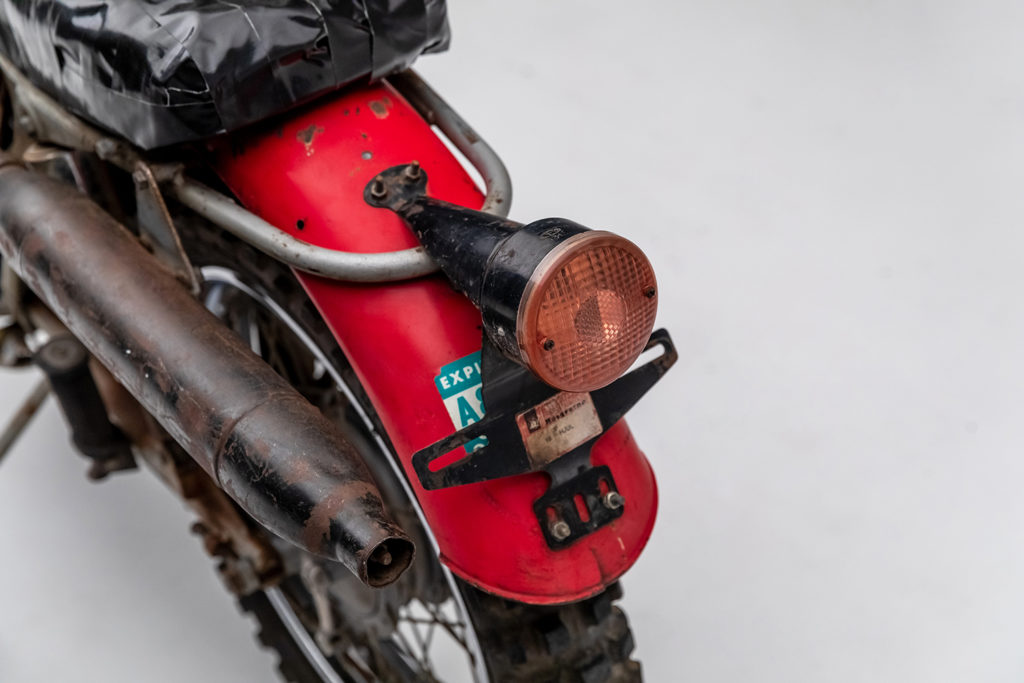 The other factor in the serendipity equation was Edison Dye, who obtained Husqvarna distribution rights in America and had brought Hallman here. Aboard the newfangled Husqvarna, Torsten simply blew the competition away, establishing a benchmark for the new sport of motocross that was totally European — Swedish, actually — from the bikes’ weirdly named Trelleborg knobby tires on up.

Prior to this time, Malcolm Smith rode a heavy 4-stroke Matchless G80CS, and then hopped over to a 2-stroke Greeves before trying a Husqvarna in a desert shakedown. “In 1966, Edison came to my repair shop and wanted me to race one of the two Husqvarnas he had imported,” Smith recalled. “I said no because I was racing a Greeves for Nick Nicholson. But he had one in his pickup and said, ‘At least try it.’ So, I rode it around the track we had built in the hills and came back and told him I would race it. It was so much better feeling than anything I had ridden before — light, powerful, and agile. I won many races on it and kept on racing Husqvarnas until they were sold to the Italians.” 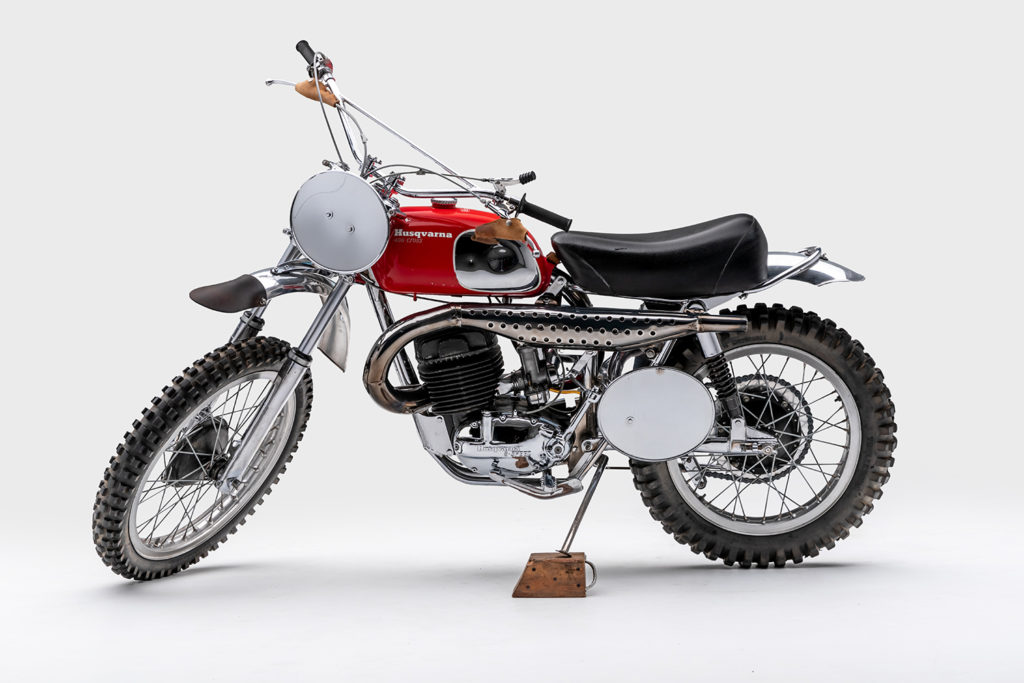 The 1971 Husqvarna 400 Cross is one of two donated to the Petersen Automotive Museum by Mark and Randy Zimmerman. Steve McQueen had it done up in chrome before giving it to his friend and fellow actor, James Coburn.

I asked Malcolm to recall his favorite and least-favorite Huskys. “The best Husqvarna I had was a 400WR 6-speed,” he said. “Very smooth, even power, and no vibration. It was only produced one year before they made it a 430.”

And the worst? “The worst bike Husqvarna ever made was the air-cooled Desert Master 450,” he revealed. “They used the ‘boat anchor’ motor, as we called it. Big, heavy, slow, and unreliable.”

With good business smarts even as a young man, Smith obtained a dealership franchise as he started racing Husqvarnas. Over the years that franchise grew into the Malcolm Smith Motorsports dealership in Riverside, California, and the Malcolm Smith Racing (now MSR) product line that have made Smith wealthy as well as famous for his on-track and on-screen accomplishments. As is typical though, instead of mentioning this, Malcolm credited Husqvarna rep Gunnar Lindstrom, a talented engineer as well as racer, with helping the brand grow in the States.

The story thus far may appear to start Husqvarna’s clock in the mid-1960s. While that’s true in the U.S., the brand’s history runs much deeper. Husqvarna began as a gun manufacturer in 1689, produced bicycles in the late 1800s, and in 1903 began manufacturing motorcycles. Starting in the 1910s, Husqvarna produced V-twin road bikes, and for a time in the 1930s, 350cc and 500cc V-twin racing models that won several Grands Prix, although most of the precious team bikes were lost in a truck fire. 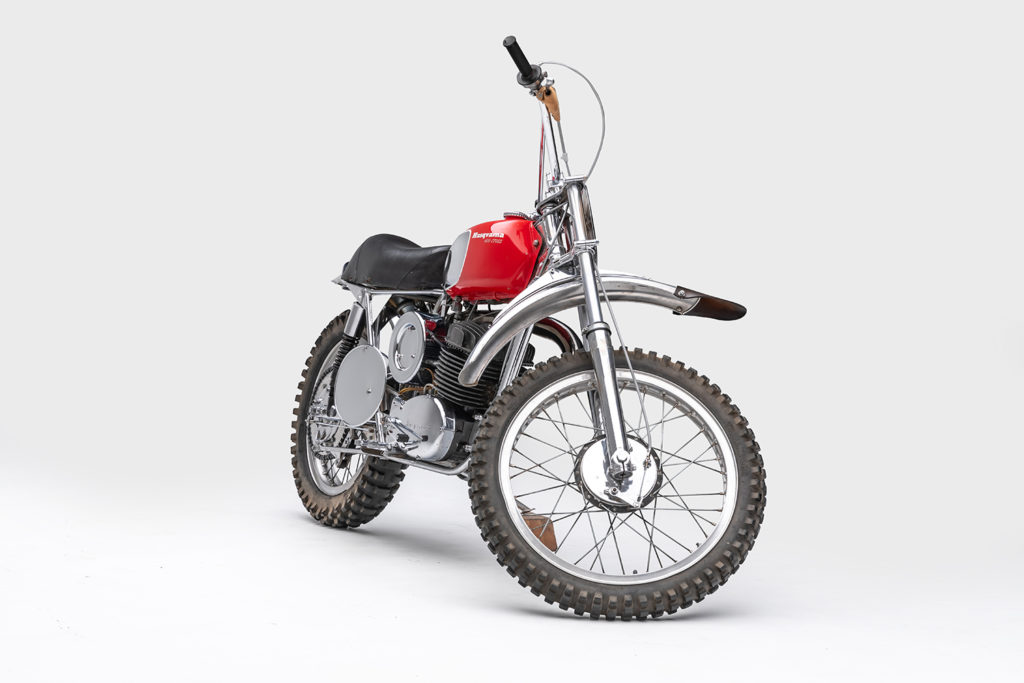 Steve McQueen’s Husqvarna 400 Cross has the original aluminum fenders, with a rubber mud flap on the front that would bend and flop around at speed.

The basic engine that powered the famous Husqvarna 250 Cross and 400 Cross bikes in Bruce Brown’s historic 1971 film first took shape in the mid-1950s Silver Arrow enduro model. Studying the egg-shaped engine cases and the organic shape of the air-cooled piston-port cylinder and head reveals how a postwar engineering draftsman’s board produced forms that, decades later, were drawn by innumerable school kids on their schoolbook covers.

The ode of these early purebred dirtbikes, from the mid-1950s through the mid-1980s and the end of the line for the “original” Husqvarna motorcycles, was defined by engineering principles of simplicity, strength, performance, and light weight. Inside those first egg-shaped cases were a straightforward pressed-together crankshaft supported by ball bearings and using a roller-bearing connecting-rod big end. Up top was an iron cylinder liner press-fit into an aluminum cylinder, topped by an aluminum head. A simple magneto provided spark and, for enduro versions, lighting. 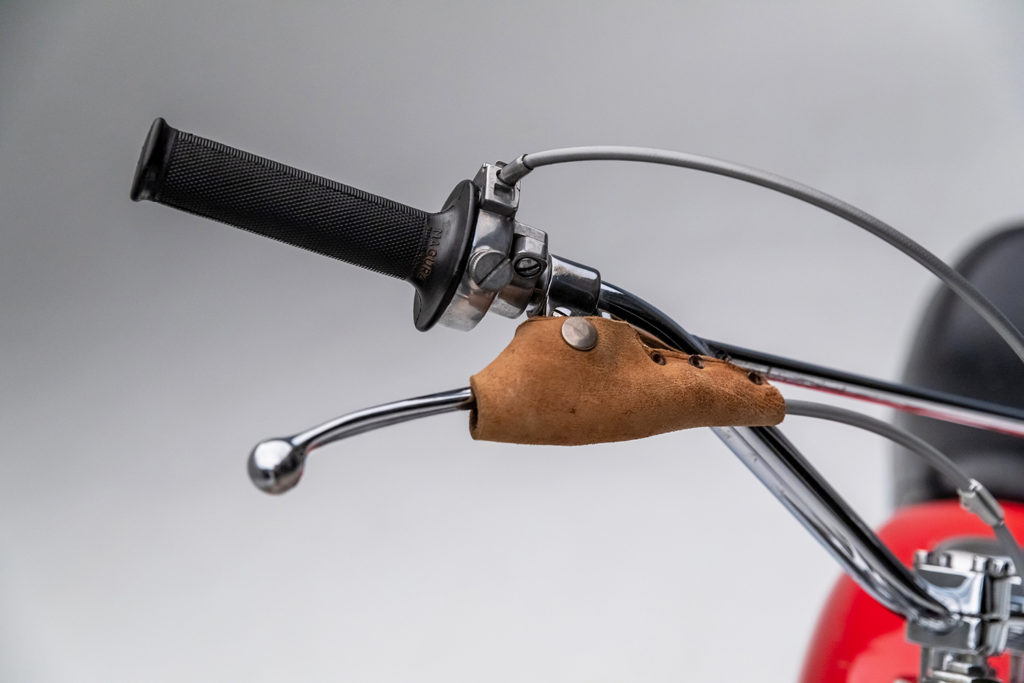 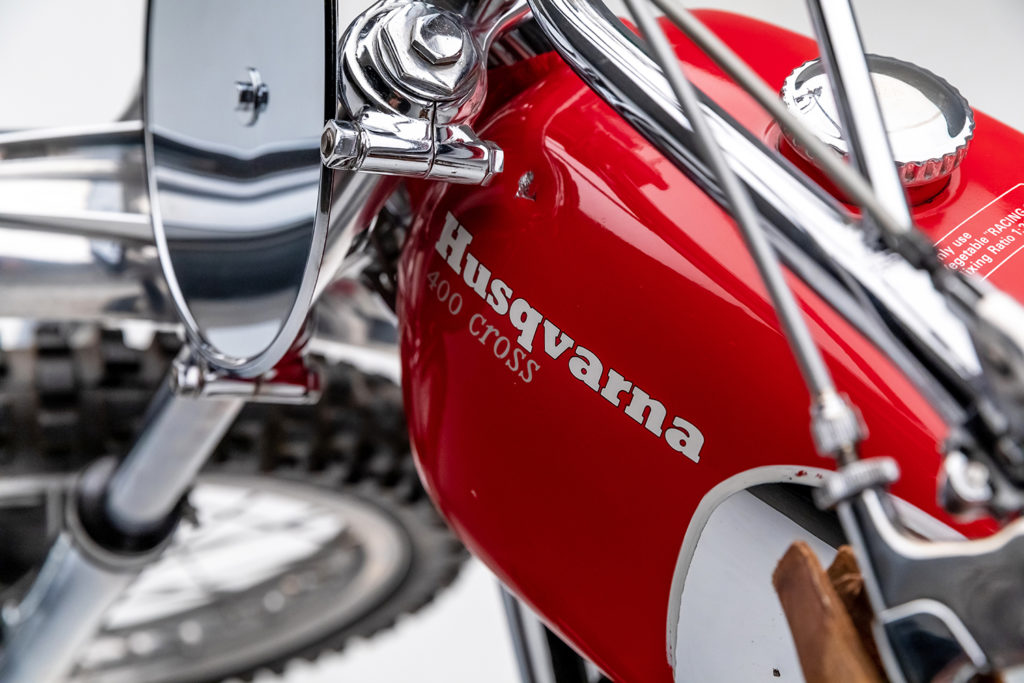 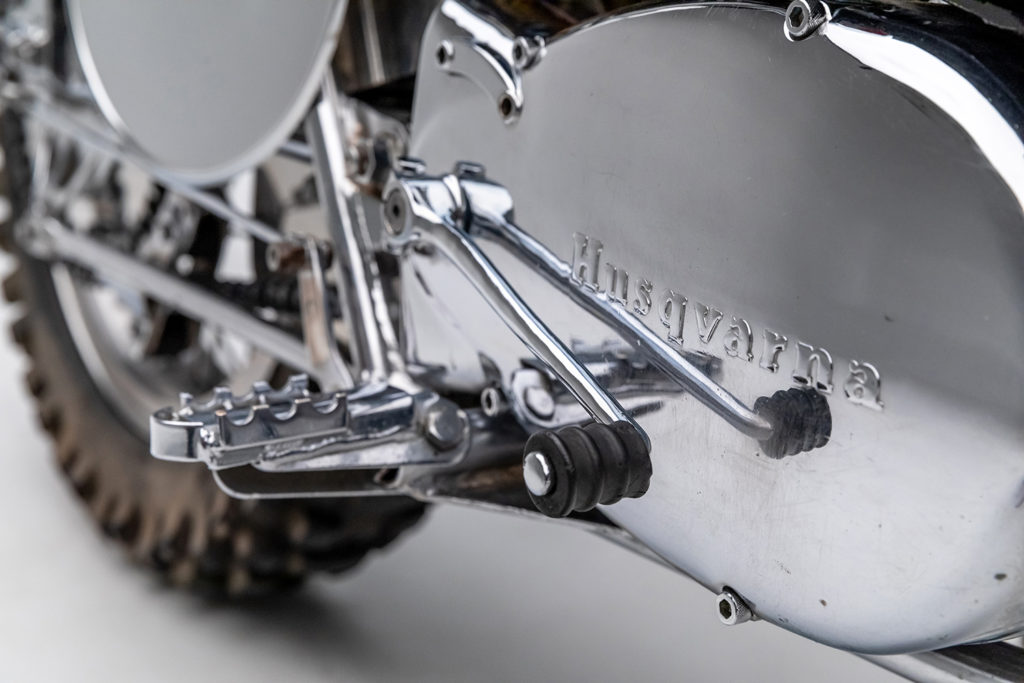 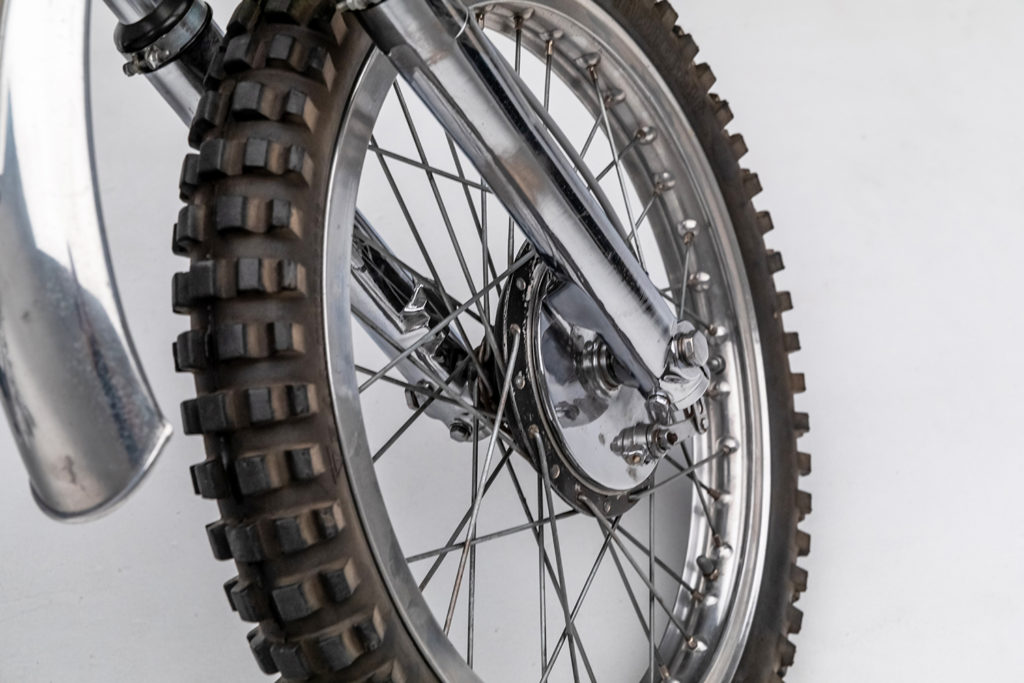 Power flowed from the crank to the early 4-speed dog-type gearbox via a gear primary drive and a multi-plate wet clutch. This type of architecture was widely found among European dirtbikes such as Bultaco and CZ. A tuned upswept expansion chamber maximized power in the desired portion of the rev range, and complemented, as did the gearbox ratios, the intended use of the model.

Noted motocross bike restorer Bill Masho has rebuilt numerous Huskys to museum standards and knows them from their crankshafts up. “They are logical but not over-engineered, and robust enough with regular maintenance,” he noted. “Early (1966-67) oval-case 4-speeds were exceedingly good, displacing 2-stroke Greeves and other early ’smokers. The 1970-71 400 Cross was probably the best model of the series — no major faults. The first 5-speeds (starting in 1972) were heavy and slower, and didn’t handle as well. But the later ones — particularly the GP of 1975-76 — were very effective.” Masho should know. As this was written he was in Unadilla racing a post-vintage national. 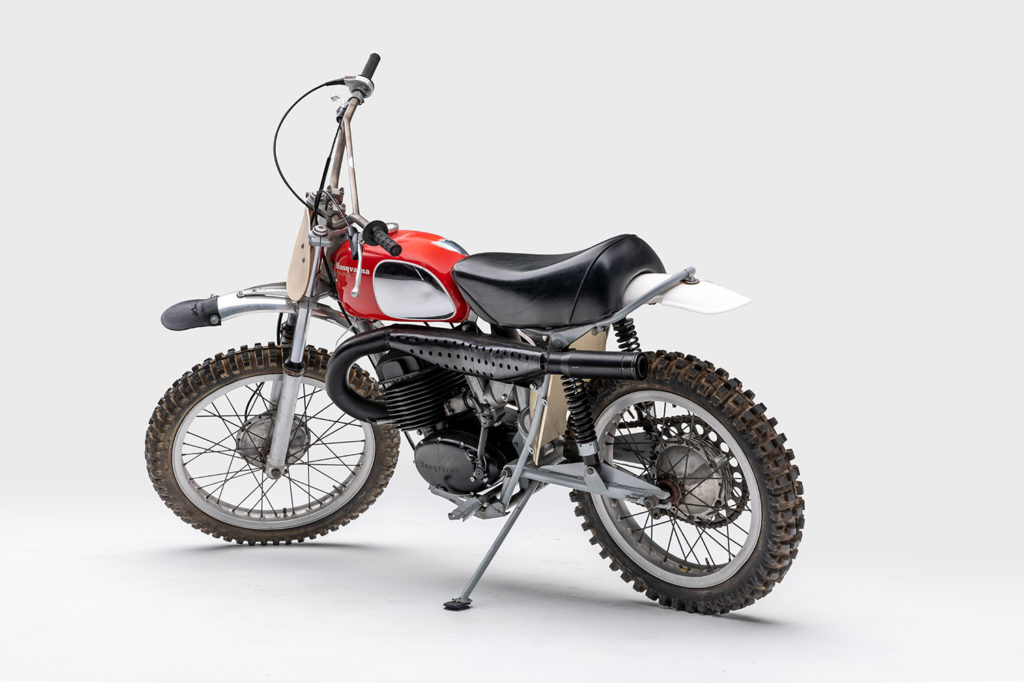 This 1971 400 Cross (VIN MI4666) was registered to Solar Productions, Steve McQueen’s production company. It’s the same model Husky on which he did a shirtless wheelie for the August 23, 1971, cover of Sports Illustrated (“Steve McQueen Escapes on Wheels”). This one was modified with a Ceriani fork and Koni shocks, and it underwent a full restoration in 2012.

Highly desirable today are the early “bolt together” frame models, and naturally the iconic On Any Sunday models with the rounded, chrome-sided tanks and that peculiar mud flap hanging off the front fender like the floppy ear of a mutt. Honda copied it on the first Elsinore models, a shameless mimicry some thought. 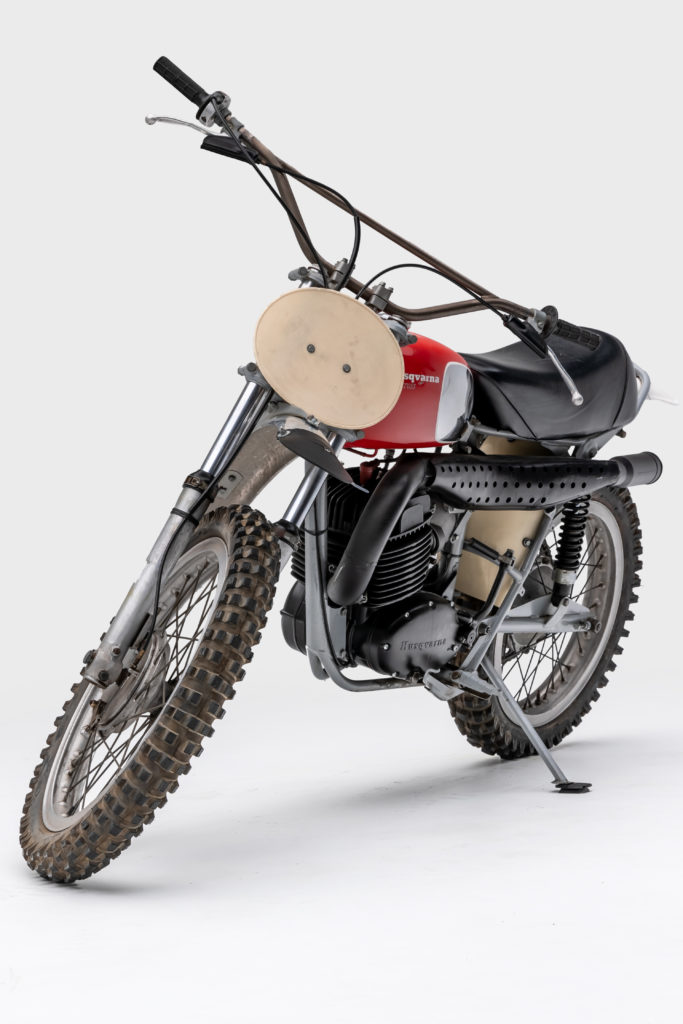 Husqvarna was on the world stage in motocross from the get-go, and it soon enough got there in America too, thanks to Hallman, Smith, and notable U.S. riders including Mark Blackwell, Kent Howerton, Brad Lackey, and Chuck Sun. And in the desert, J.N. Roberts and Whitey Martino — and John McCown with his dog Kookie riding on the gas tank! — excelled. Remarkably, given the brand’s strong reputation, in 1976 Howerton claimed Husqvarna’s first and only U.S. national motocross championship in the 500cc class. It would be over 40 years before Zach Osborne repeated the feat aboard the modern KTM-bred 250cc and 450cc 4-strokes. Dick Burleson and Malcolm Smith flew the Husqvarna flag in enduros, and Smith won the Baja 1000 twice on Husqvarnas, first with Roberts and later with Gunnar Nilsson.


The Japanese companies got on the pipe big time in the 1980s, reshaping the technology battlefield with liquid cooling, long-travel suspension, and single-shock, rising-rate rear suspension systems in a stampede of progress. Husqvarna was late to follow, and eventually fell out of favor with the hard chargers. Even so, with its antiquated air-cooled engines and twin shocks, the brand soldiered on into the mid-1980s in the U.S. And then the party — at least here — ended, as the forward-looking ’83 TE 510 4-stroke enduro was a decade ahead of the industry. Ownership of Husqvarna traded hands several times — Cagiva in 1987, BMW in 2007, and finally KTM in 2013.

Today the “new” Husqvarna is active in motocross, cross country, and enduro, and offers a line of 2-stroke and 4-stroke bikes paralleling KTM’s meteoric line. Husky is now also back on the street with the 701 Supermoto, 701 Enduro dual-sport, the avant-garde Svartpilen and Vitpilen naked bikes, and the upcoming Norden 901 adventure bike. 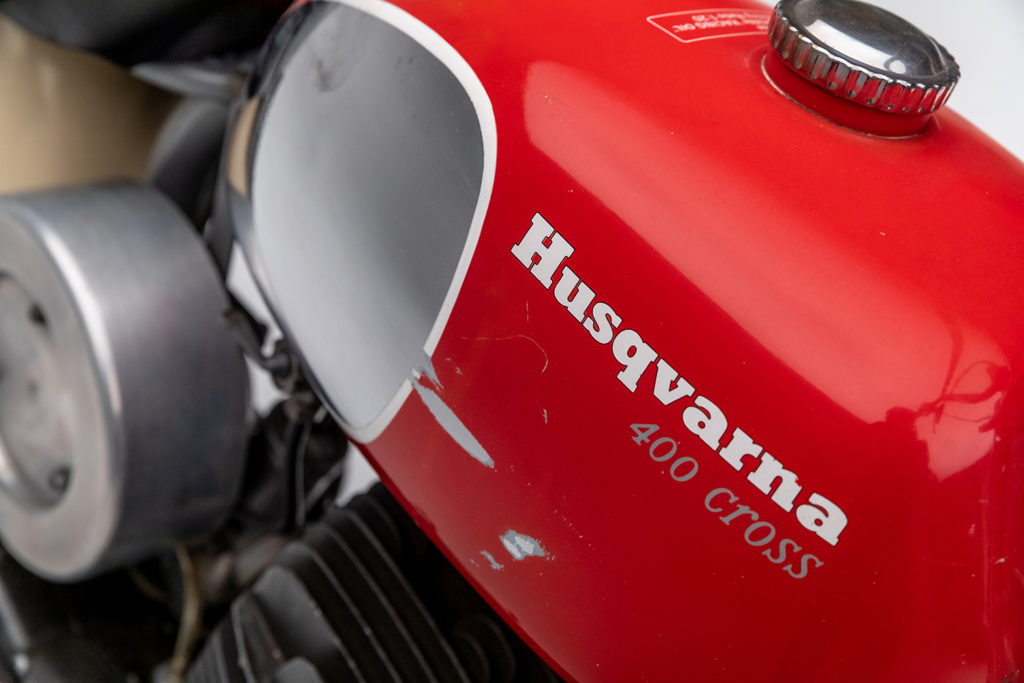 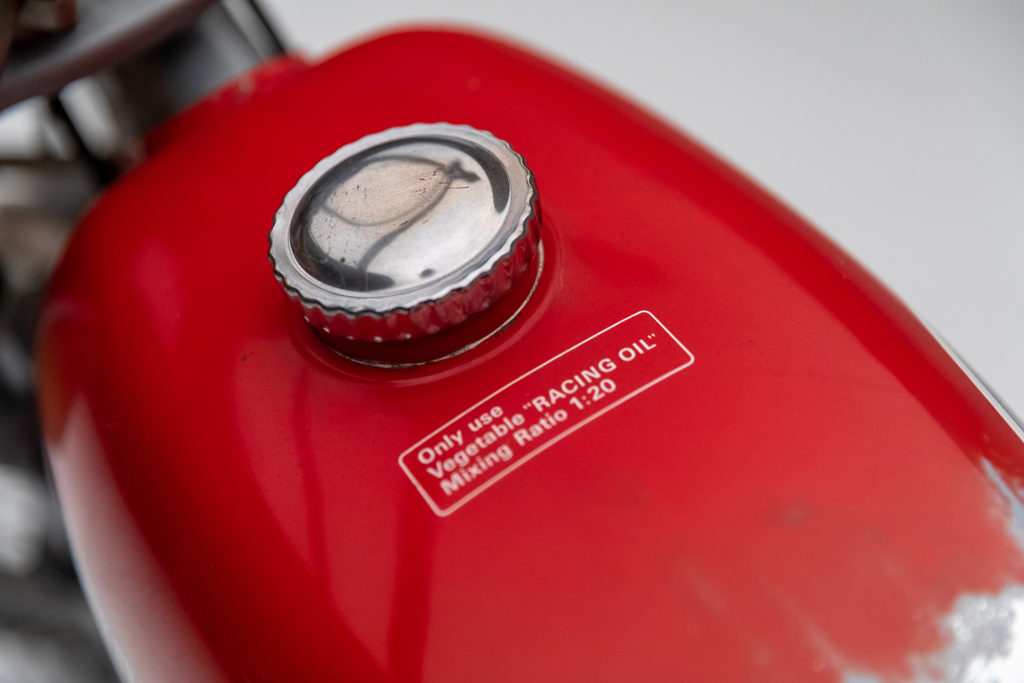 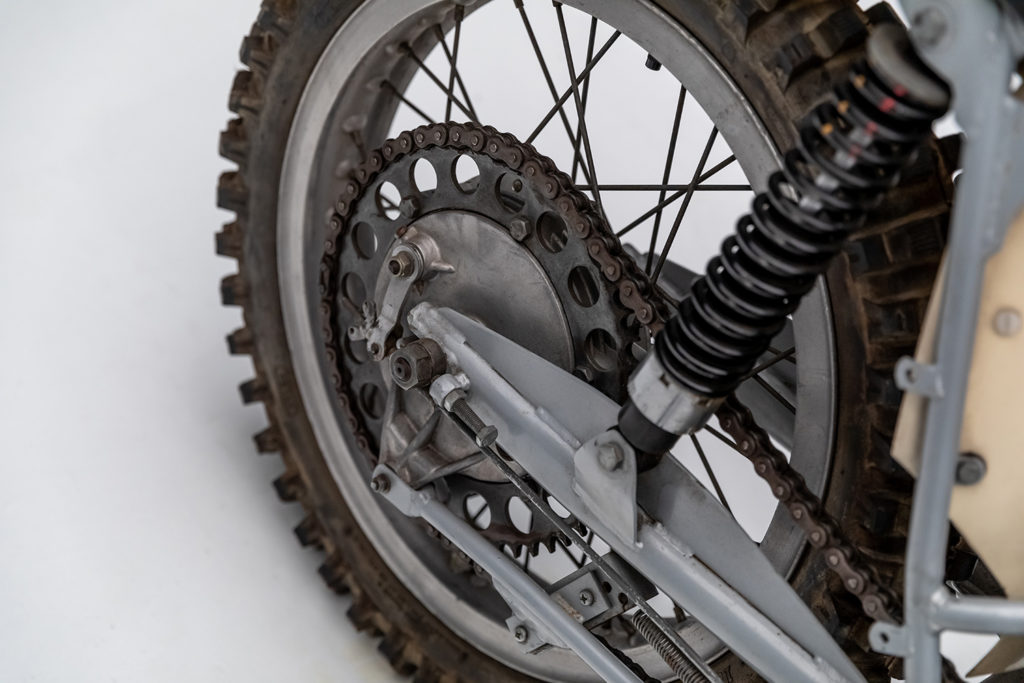 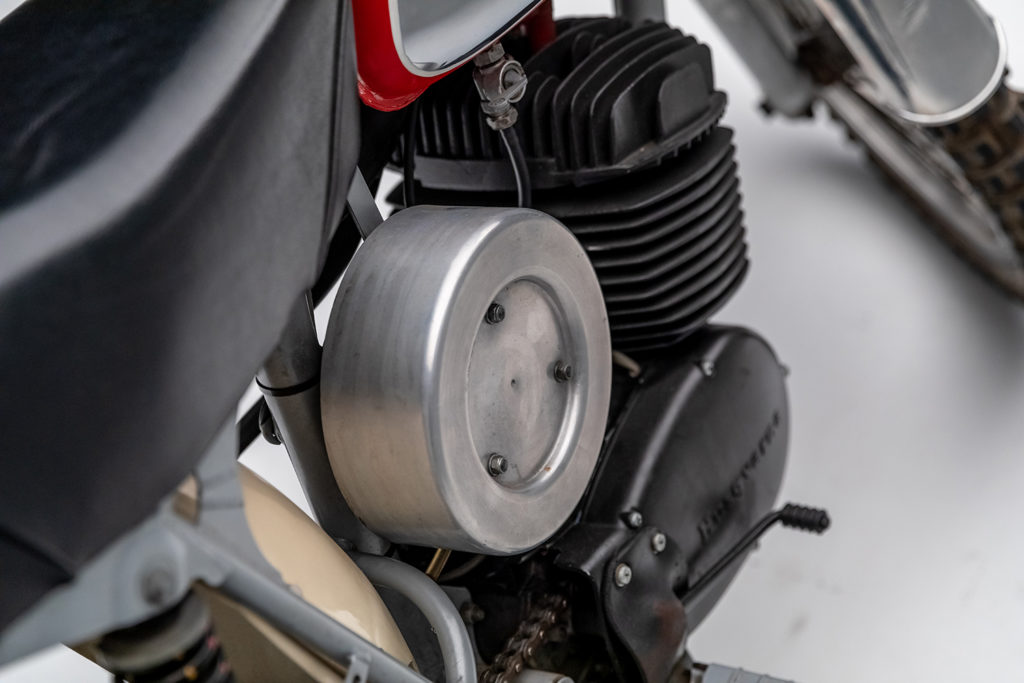 It’s been 50 years since On Any Sunday charmed audiences across the country, and even longer since those first wraithlike silver-and-red Husqvarnas lined up to race in the hills of Southern California. A kid who got an eyeful that day would nearly be a senior citizen now, but he would still remember the unmuffled shout of 2-stroke racing engines and the flash of the Huskys’ chrome-sided tanks, polished fenders, and maybe even that floppy mud flap swept back in the wind.

And that, my friends, is what you call an imprint.

The Husqvarnas shown in the accompanying photos were donated to the Petersen Automotive Museum by Mark and Randy Zimmerman. The Petersen’s permanent collection includes hundreds of automobiles and motorcycles. Located in Los Angeles, the museum regularly features motorcycle exhibits in the Richard Varner Family Gallery — “ADV:Overland,” curated by Paul d’Orléans, opened in July 2021. For more information, visit petersen.org.