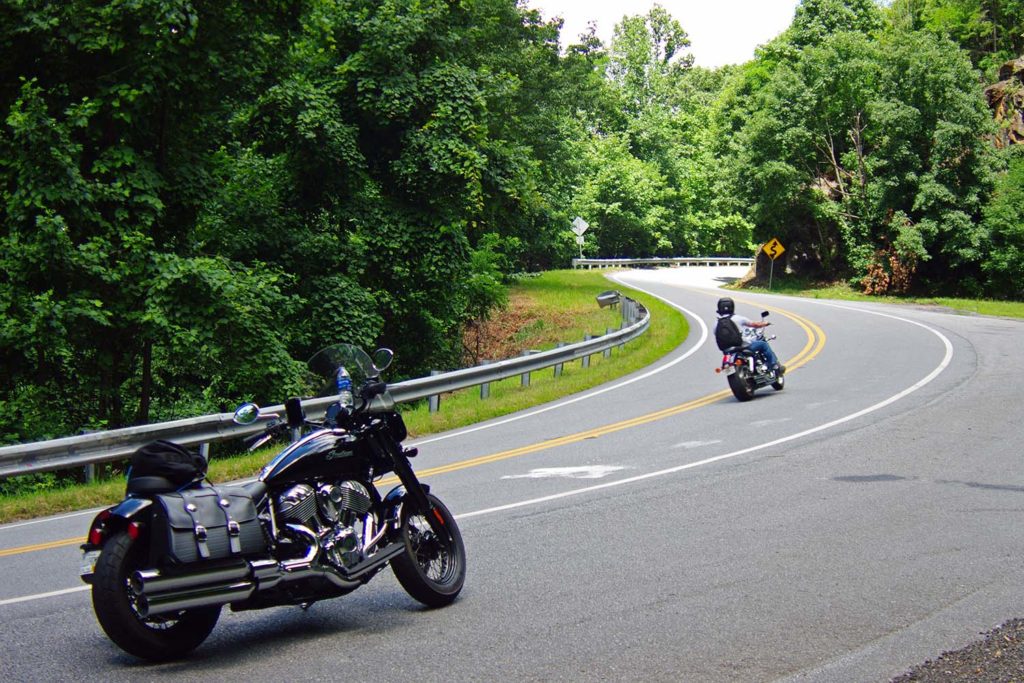 This rider is enjoying the curves along State Route 60 on his way to Two Wheels of Suches, which is an ideal spot to stop for a cool drink and to see cool motorcycles. (Photos by the author)

Formed roughly 480 million years ago, the Appalachians are a chain of mountains that stretch from Newfoundland, Canada, down to central Alabama. Eons of erosion have rounded and softened their edges, and rivers and creeks have cut deep creases within their slopes. The result is a nearly endless variety of roads that follow the contours of the land, attracting motorcyclists from far and wide like moths to a flame.

The Appalachian Trail begins in North Georgia, on Springer Mountain, not far from one of the best riding loops in the Southeast. The three sides of the Georgia Triangle are anything but straight. In fact, the triangular loop made up of U.S. Route 19 and Georgia State Routes 60 and 180 has some of the most challenging curves and best scenery in a region known for both. 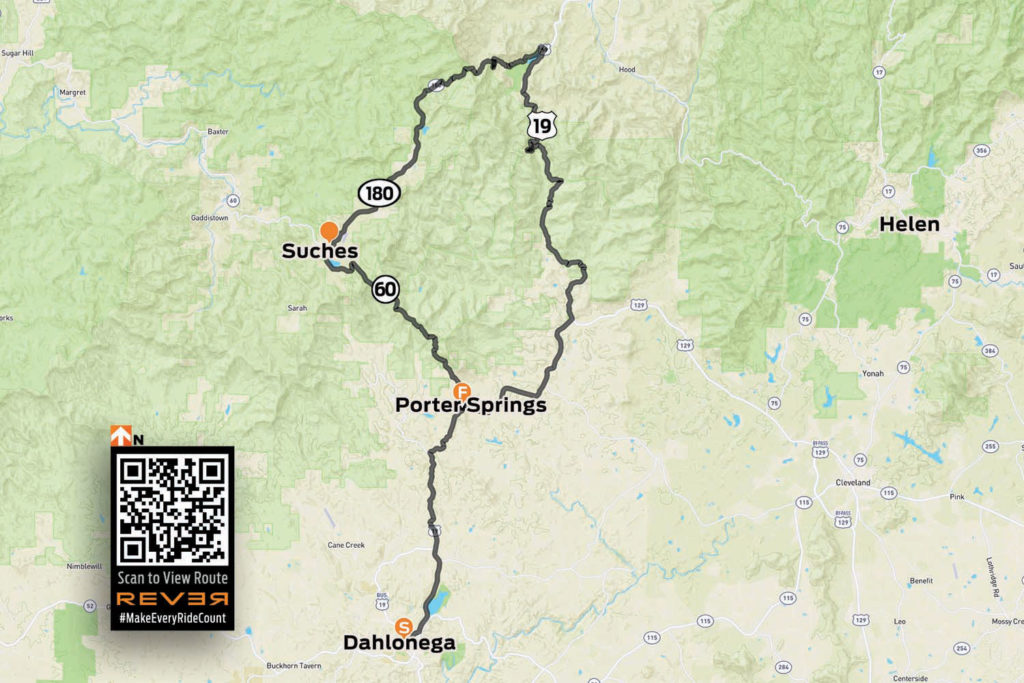 The Georgia Triangle is located in the Blue Ridge Mountains just north of the charming, historic mountain town of Dahlonega. The three-road loop is located within the Chattahoochee National Forest, and there’s an abundance of streams, waterfalls, lush forests, and historic sites in the area. Add in numerous tourist attractions, activities, hotels, bed-and-breakfasts, campgrounds, and eateries, and you’ve got everything you need for a great day ride or a long weekend of exploration. 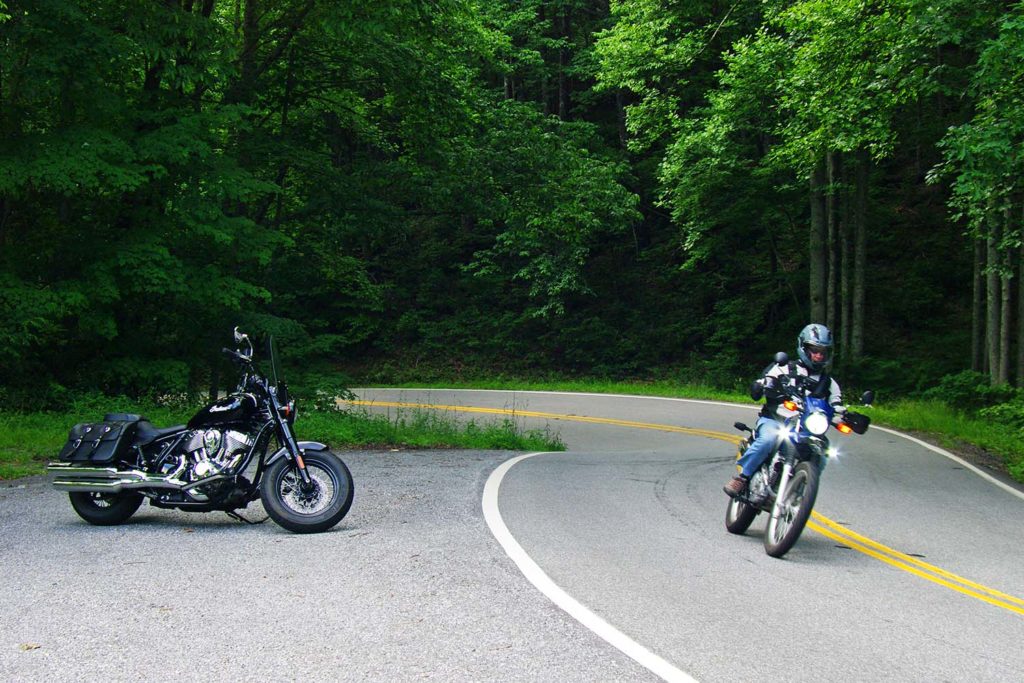 Plying the curves on State Route 180.

Six miles north of Dahlonega, the triangle begins where U.S. 19 meets State Route 60 at Stonepile Gap. Within the junction’s roundabout is a mound of stones that is said to mark the burial spot of Cherokee Princess Trahlyta. According to legend, Trahlyta was a beautiful princess kidnapped by a Cherokee warrior she refused to marry. Her dying wish was to be buried near her home on the mountain, though she probably didn’t imagine her grave would be surrounded by a ring of asphalt.

Riding north on Route 60 toward the town of Suches is the first leg of the triangle. If you have not been practicing your cornering skills, be cautious. These roads are not for the faint of heart. They can either be exhilarating or nerve-wracking, depending on your motorcycle’s cornering clearance and your comfort with tight S-curves and decreasing-radius turns. For the alert, confident rider, these roads offer an unforgettable riding experience, with gorgeous scenery and well-maintained pavement. 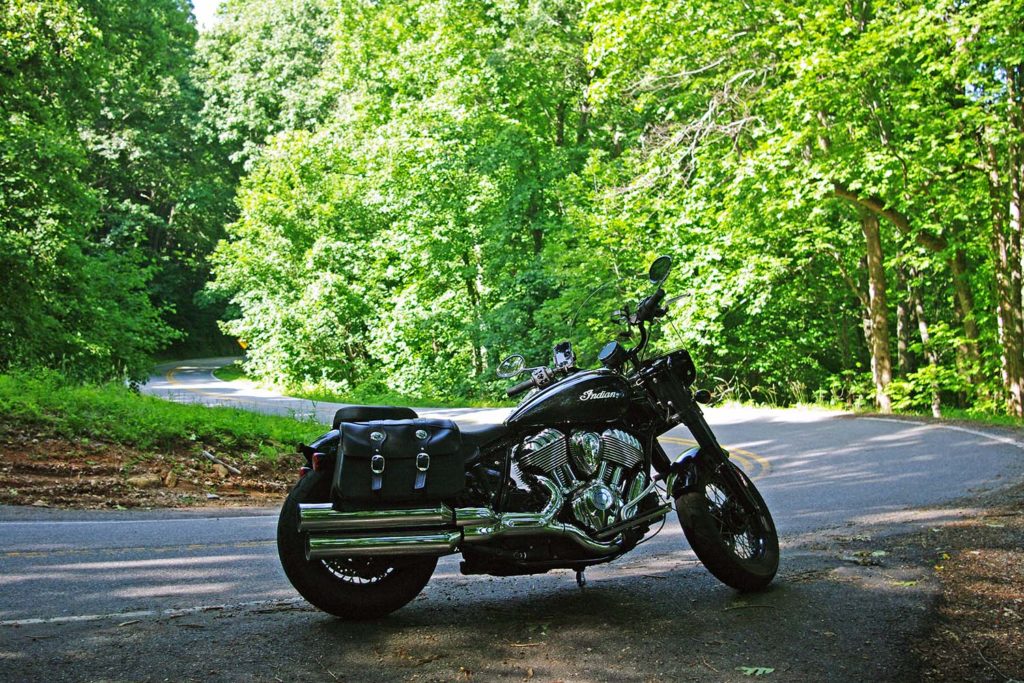 About 5 miles up Route 60 is Woody Gap, and a look to the left reveals an expansive valley with Springer Mountain rising on the other side. The Appalachian Trail crosses the road nearby, and other stops on the road have signs and information about Civil War battles, gold mining sites, and hiking trails.

In the small town of Suches is a well-known motorcycle lodge and campground called Two Wheels of Suches, a popular meet-up spot. On weekends the parking lot is filled with bikes of all styles and vintages, and riders from all over. There’s an onsite restaurant that serves burgers, sandwiches, snacks, and drinks on Friday nights and weekends. The main lodge offers rooms for rent, and there are small cabins and campsites with a bathhouse on the property. A single-person campsite is $15/night, cabins are $65/night, and lodge rooms are $75/night. 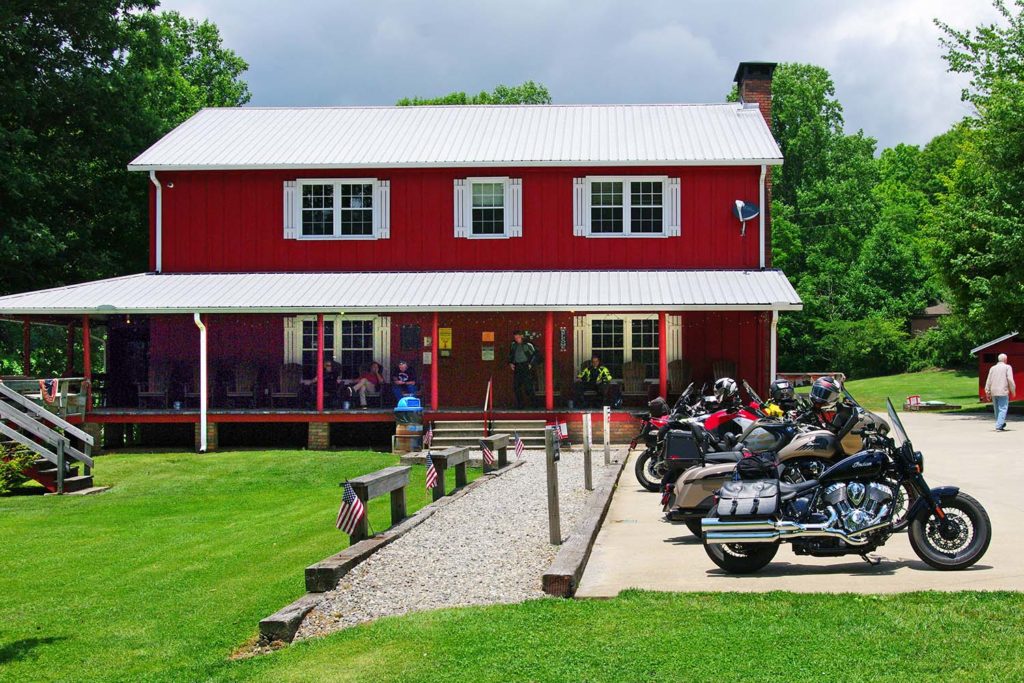 Two Wheels of Suches is a motorcyclists’ oasis.

A stone’s throw from Two Wheels of Suches is the junction with State Route 180, also known as Wolf Pen Gap Road. This segment of the ride is without a doubt the most challenging leg of the triangle, with more tight curves and steep grades per mile than any other paved road in Georgia. The first few miles are a sedate and primarily straight two-lane blacktop leading to Lake Winfield Scott Recreation Area. When the lake’s emerald-green water is calm, it acts as a large reflecting pool for the mountains that surround it. And it is a particularly scenic spot in the fall when the leaves change color.

Once past the lake, the roller-coaster ride begins with a sign that says “Sharp Curves and Grades Next 5 Miles.” Route 180 snakes through the Sosebee Cove Scenic Area with speed limit signs on some curves reading as low as 10 mph, with nary a straight section of road. Stay sharp and heed the caution signs. The great thing about this section of the Georgia Triangle is that it’s only 11 miles long – the same length as the Tail of the Dragon in Tennessee – so you can ride it back and forth to your heart’s content. 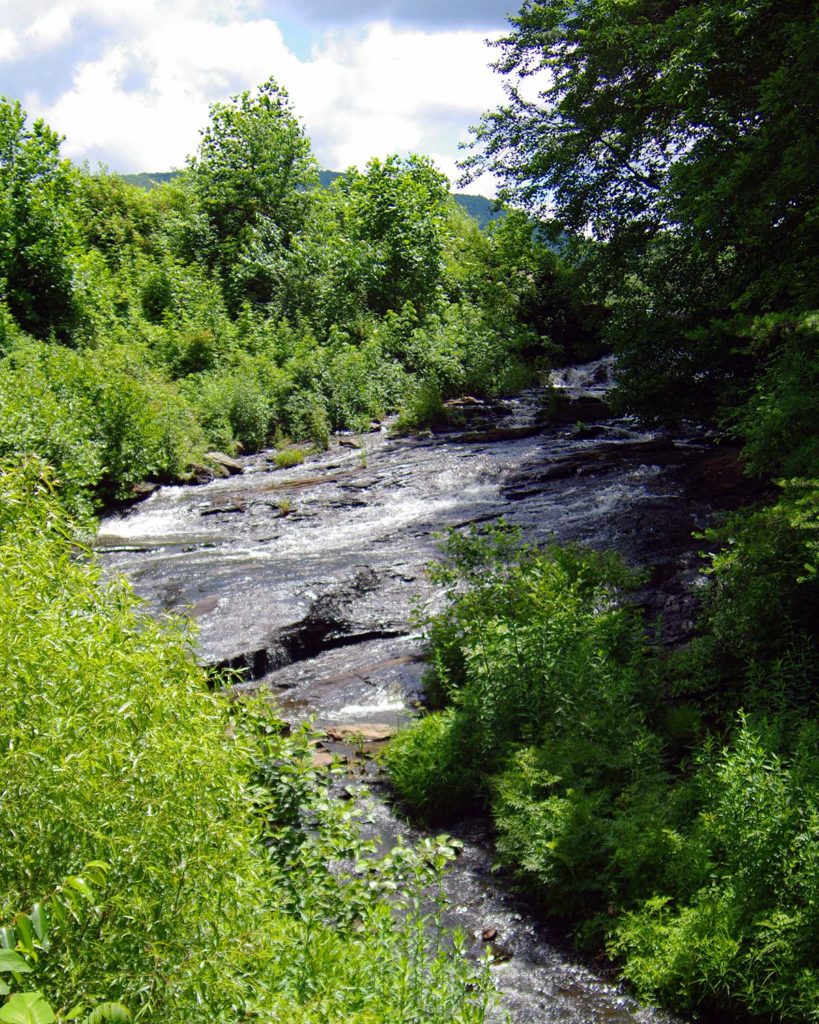 Canada Creek passes through the Two Wheels of Suches property. 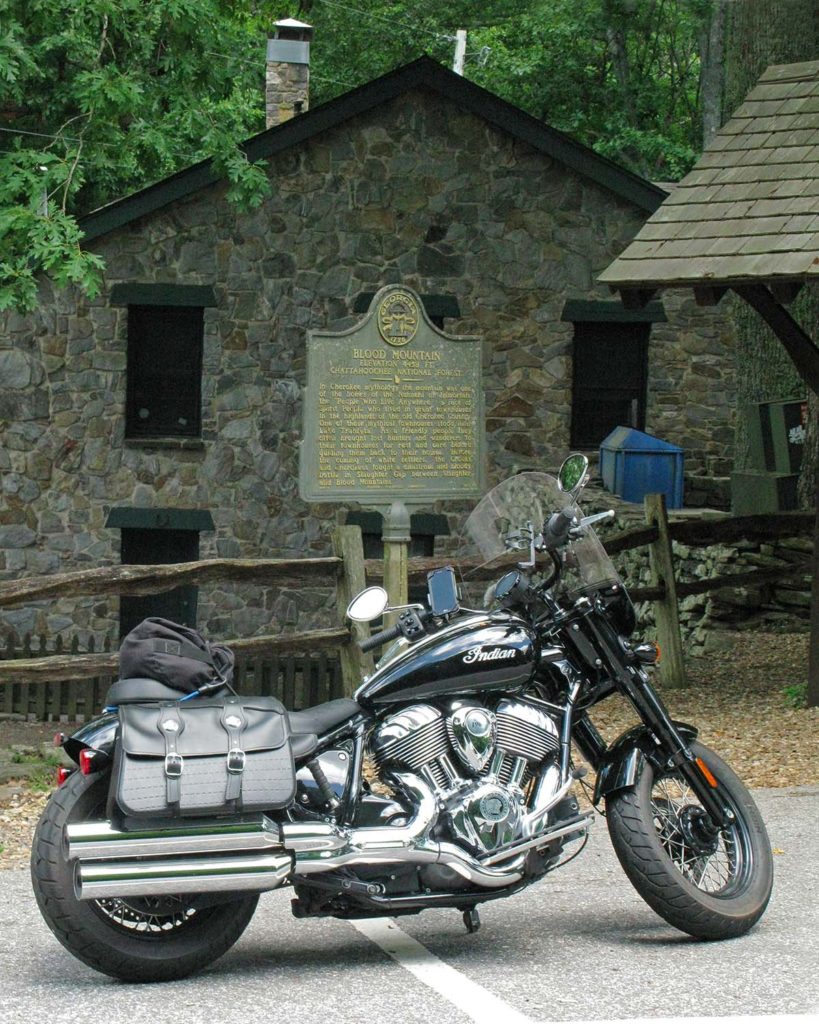 In Cherokee mythology, Blood Mountain, located within the Georgia Triangle, was home to the Nunnehi or Immortals. It was also the site of a fierce battle between the Cherokee and Creek tribes.

Just before Route 180 merges with U.S. Route 19, it passes by Lake Trahlyta, which is part of Vogel State Park. You can swim in the lake and stay in the park, which offers tent camping, RV sites, and rental cottages and yurts. Georgia is often hot and humid in the summer, even up in the mountains. I have stopped here on a hot day for a quick change and a swim, so pack your swimsuit.

Riding south on U.S. 19 is the last leg of the triangle. The road here is wider, with passing zones for easily and safely getting around slower traffic. Still, it has magnificent twisting sections of repeating S-curves and turns, great scenery, and worthwhile stops all the way back to the triangle’s starting point. 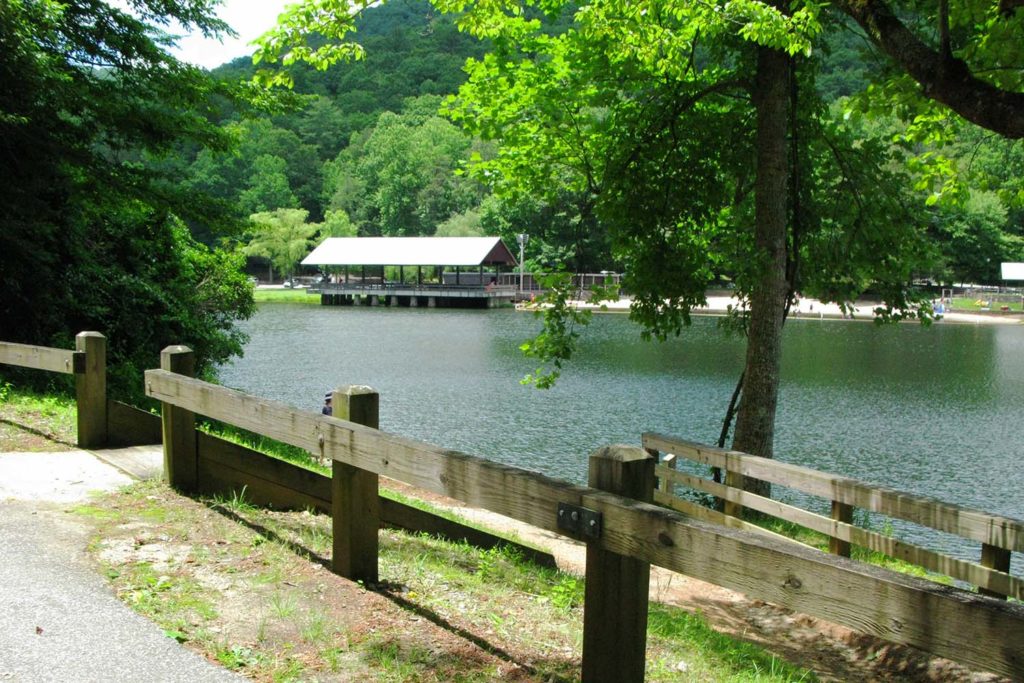 Lake Trahlyta is part of Vogel State Park, located in the northeastern corner of the triangle.

Continuing to the junction with Route 60 yields total mileage around the triangle of about 36 miles. The travel time for a nonstop ride is about 90 minutes at a reasonable rate of speed, but why hurry? The beautiful forest ride and options for stops make a leisurely pace worthwhile. Or, follow the lead of many motorcyclists and repeat the loop or run it in reverse. You won’t be bored, I promise.

Part of what makes the Georgia Triangle such a target-rich destination is that it’s a hub for other great rides in the area. Route 60 is a joy to ride not just to Suches but beyond, all the way to Route 76. From there, head east to Hiawassee, the scenic town on Lake Chatuge, or west to Route 515, which becomes I-575 and takes you to Atlanta. 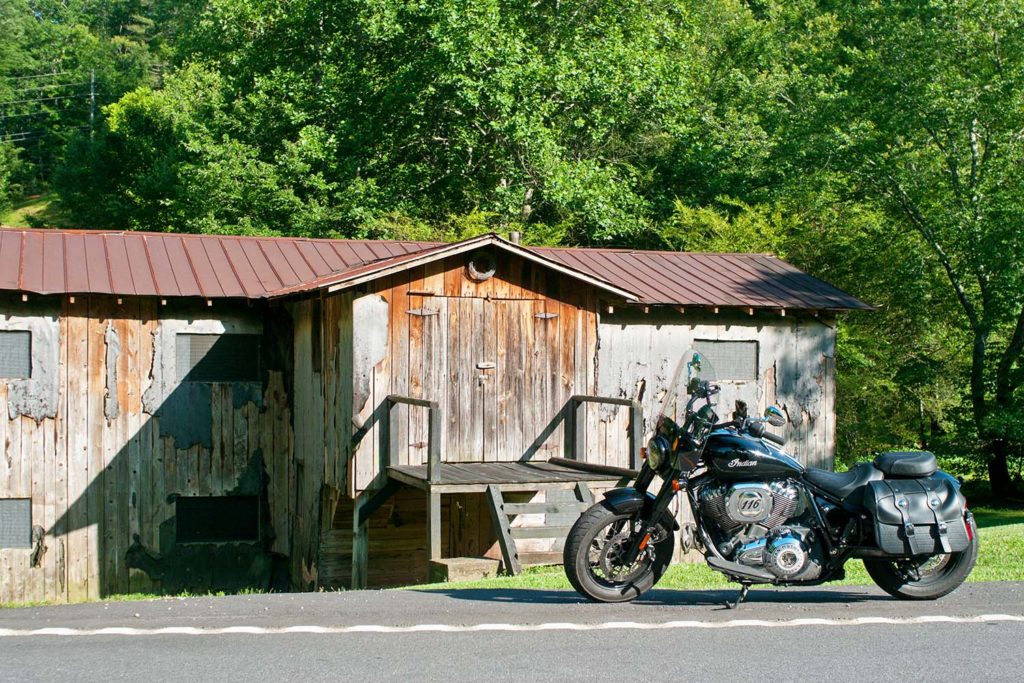 If you’re looking to explore further, taking Route 60S (also known as Murphy Highway) northeast at Mineral Bluff into North Carolina will lead you to U.S. Route 74 and the town of Murphy, North Carolina. Continuing east on U.S. Route 64 is a scenic ride through the Hiawassee River and Lake Chatuge areas, and several roads connect back to the Georgia Triangle area.

Continuing north on U.S. 19 past Vogel State Park, Route 180 breaks away again and continues east. A short hop on 180 takes you to State Route 348, also known as the Richard B. Russell Scenic Highway, another gem of a road. Or continue east on 180 to Brasstown Bald, the highest point in Georgia (4,784 feet), which on a clear day offers a 360-degree view of four states. 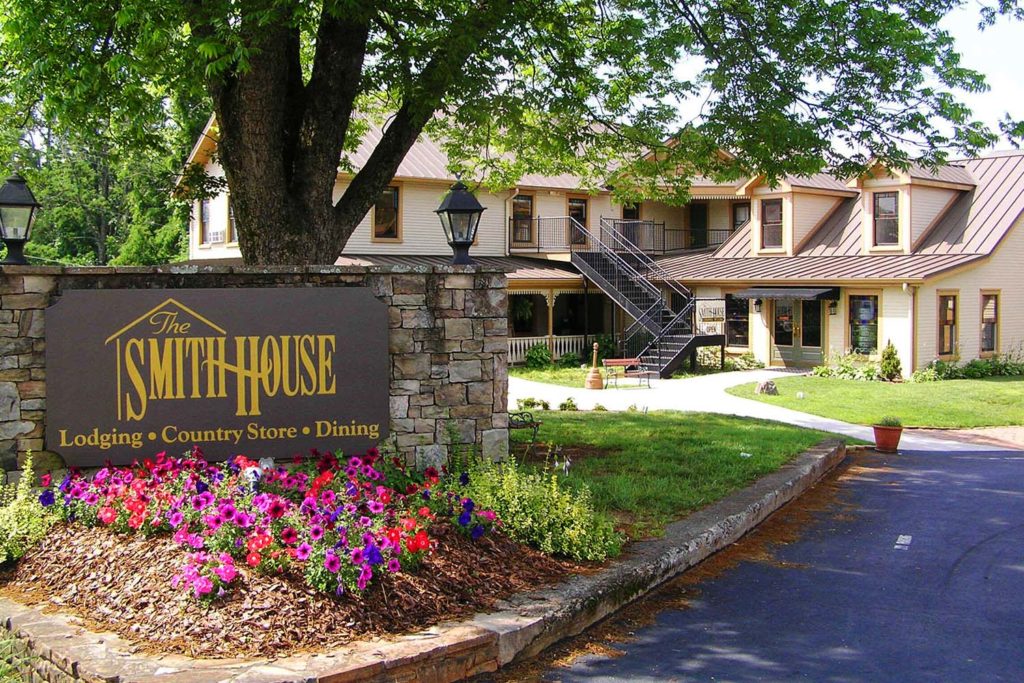 Ride to eat, eat to ride. The Smith House in Dahlonega serves some of the best country cooking in the region. Don’t wear tight pants.

If you are planning a stay in the area, Dahlonega is a charming, historic town known for its history of gold exploration and mining. Legend has it that in the 1540s, Spanish explorer Hernando DeSoto searched this area for El Dorado, the legendary lost city of gold. Dahlonega was the site of the second major U.S. gold rush in the early 1800s and still has active mines where visitors can pan for gold and gemstones. For lunch or dinner, I highly recommend the Smith House, which serves fried chicken, ham, sides, and desserts family-style, with platter after platter passed around long tables. Just to the east of Dahlonega is Helen, a quaint alpine-style village. Both towns offer many choices for lodging, dining, and shopping.

If you’re undecided about which road to ride first, throw a dart at the map – chances are wherever it lands, you’ll find a winner. North Georgia offers hundreds of miles of great roads to ride, and the Georgia Triangle is just the beginning.