I don’t know how this new Sa1nt gear made it past the actual hipsters at MO who snap up all the good stuff first, but when the Shearling jacket and jeans arrived on my doorstep I felt 30 years younger immediately and briefly considered resigning from the Gray Ponytail Brotherhood. 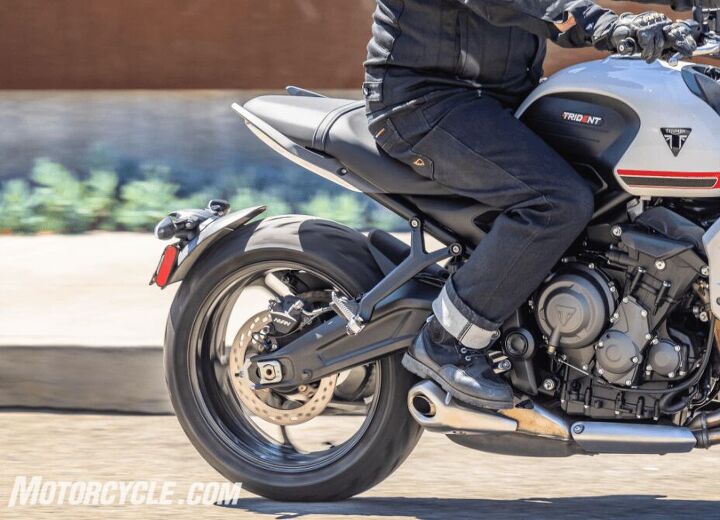 When I couldn’t get my foot through the lower leg of the size 34 Unbreakable Slim jeans, I felt old again. But when the size 34 Unbreakable Straight jeans I traded them in for arrived, my testosterone level re-boosted. Perfect fit… even a bit roomy (Sa1nt says they run a bit large). It looks like the inseam will be 33 inches on whatever waist size you order; rolling the cuffs up works for me. (Dunno what you do if your inseam is longer?)

Riding jeans are one of the great motorcycling inventions of the last decade, and I apologize to whoever was making them before then. Lots of us rode in regular jeans a lot of the time – blue jeans and leather jacket being the classic outfit since before Brando for casual and, lots of times, even sporty riding. Cycle magazine ran a cover story in 1988, right before I went to work there, about how unprotective your blue jeans are in a crash, and it was rumored that the backlash about that story was what got the Editor in Chief who’d hired me – Phil Schilling – canned. It was blasphemy to point out, graphically, on the cover of the biggest motorcycle magazine in the world that you could get hurt riding motorcycles. Bad for sales, back before helmets were required in California.

The earliest riding jeans I recall weren’t much more than heavy denim jeans with extra stitching and bulky pads stuck in the knees and hips that were good for working on your knees, but not so great for living in the rest of the time.

Lately, though, we’ve been experiencing some really nice riding jeans, and these Sa1nts, which we’re calling Saints from now on so the spellchecker will leave us alone, definitely fall into that category. Not only are they woven with Dyneema, a patented fiber we’re told is 15 times stronger than steel, there’s also elastane in the fabric, which makes them stretch jeans. Stretch jeans are right up there with modular helmets; it’s hard to go back to the old stuff once you’ve sampled them.

Someone’s in the Kitchen with Dyneema


Dyneema, as everyone already knows, “began life as an Ultra-High Molecular Weight Polyethylene (UHMWPE), which was first polymerized in the 1950s, then commercialized in the 1970s. UHMWPE is a type of polyolefin that is composed of very long chains of polyethylene with a very high percentage of parallel orientation and high level of crystallinity. The extremely long polymer chains enable load transfer by strengthening intermolecular interactions. UHMWPE fibers are manufactured in a gel spinning process.” FiberLine.com 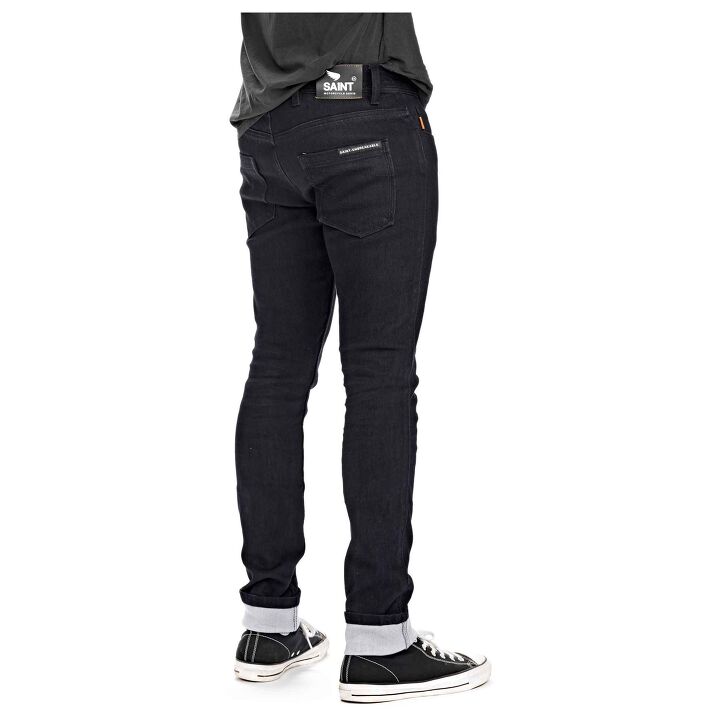 
Among other excellent properties, Dyneema is great at abrasion resistance, and that’s the main selling point of Saint’s motorcycle clothing. Saint says by using “the same fibre that stops bullets, tethers space shuttles and armours helicopters, we’ve created a single layer, lightweight Unbreakable jean that belongs in a Bond movie.”

Dyneema is also light in weight – 30% lighter than nylon and polyester. 45% lighter than aramid – which makes the jeans pretty swell to slip into on a hot day. Any day, really. Dyneema claims its fabrics are UV and water resistant, too, though Saint makes no claims re: use of these as rainwear.

The fabric does breathe pretty well, though: On cool days, you can feel the air coming through, and on hot days you’re glad for it. Other riding jeans that add layers of Kevlar or aramid inside aren’t as cool as the Saints on hot days.

The stretchiness is the thing, too. The all-way give in these lets you sit comfortably on any kind of motorcycle from feet-forward cruisers to tall ADV bikes that require superior crotch flexibility for mounting and dismounting. Off the bike they’re great for walking around, sitting around, seeing and being seen – your classic 5-pocket jeans but optimized for sliding on asphalt.

Will this impact me?


The main place the Saint gear comes up short is in impact protection, which many would contend is maybe more important, at street speeds, than abrasion resistance. Or equally important. So many urban accidents involve impacts and near impacts with wayward automobiles and roadside obstacles, many times you’re on the brakes hard and slowed down by the time you hit the thing or the pavement. And that’s when you most want the sort of excellent armor found in the knees, elbows and shoulders, at least, of all good protective gear. The Saint gear gives you bupkus. 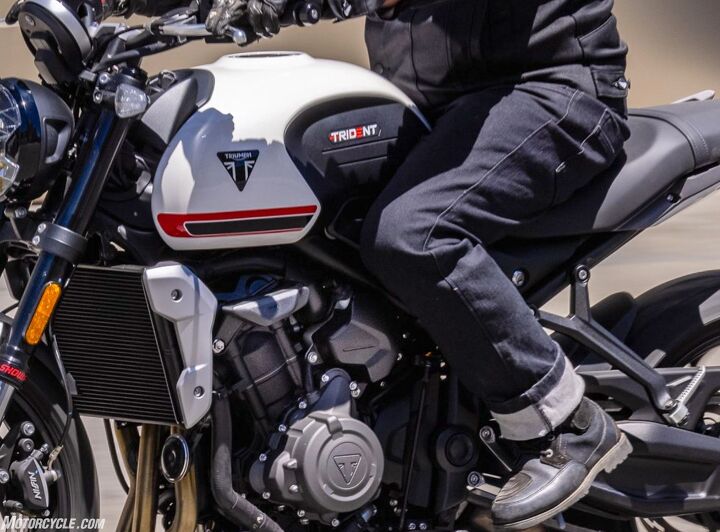 Okay, almost bupkus. They’ve recently added “D30 Ghost Armour Set” to the website, for $75, but my model 4406 jeans have no pockets to accept the knee or hip pads. They did just add a new pair of Unbreakable Jeans with Armour Pockets to the website, but that doesn’t help us pre-existing conditions much, does it? Also, the D30 package seems a bit stopgap, in that Saint says the hip armor can be used as shoulder armor, the knee armor can be used as elbow armor, and one size fits all. Reminiscent of the old army joke wherein we’re all getting a change of underwear.

On rides where I know we’ll be going for the gusto, I grab gear with more padding. Tooling around town and moto-socializing, lately I reach for the Saints first.

I suffered a micro-frustration when I removed this from the box, and had to spend 20 minutes unwrestling the six main buttons to try it on. The button holes have loosened up a bit now, but you still have to button and unbutton six buttons every time you want in or out. If you leave your jacket sealed up when you’re off the motorcycle, you’re set. The cuffs also seal with buttons. Good luck doing them up with gloves on.

As with the jeans, there’s one layer of Dyneema fabric between you and the road. The fabric in the sleeves is heavier Dyneema 6.0, for even more abrasion resistance than the 2.0 elsewhere, but there’s zero padding in elbows or shoulders, and no pockets to hold the optional D30 set either. But hold your slides on key impact areas to below 5.9 seconds, Saint says, and you’ll be unabraided. Good to know. Wait, 5.9 seconds at what speed?

Yes, it comes with both black and white faux fur collars, which I sampled once on a cool day and enjoyed the neck warmth while discovering the jacket’s real talent: The real beauty (some would argue its only beauty) is how well air flows through it on hot days. On days in the 90s here in SoCal, wearing the unlined Saint stuff is about halfway between a good perforated jacket and a mesh one in terms of airflow. Abrasion-resistant and 15 times stronger than steel Dyneema might be, but the fabric here is also lightweight and breathable. 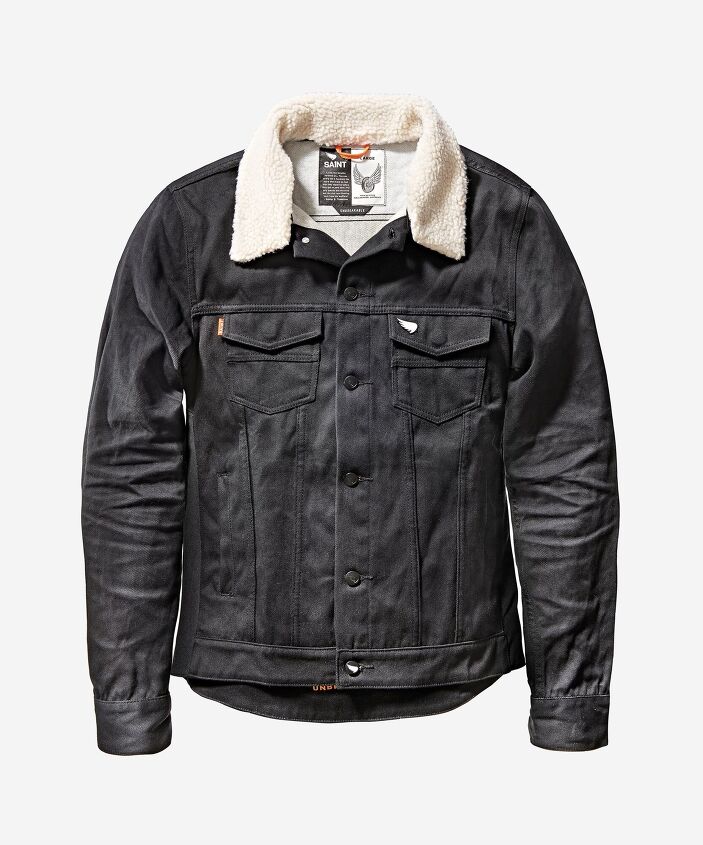 
My size L is a bit large everywhere, which it needs to be to go around my expanding belly. But there’s still room under for a nice layer or two. Out back, the Unbreakable is cut long, nice for keeping out unwanted drafts. 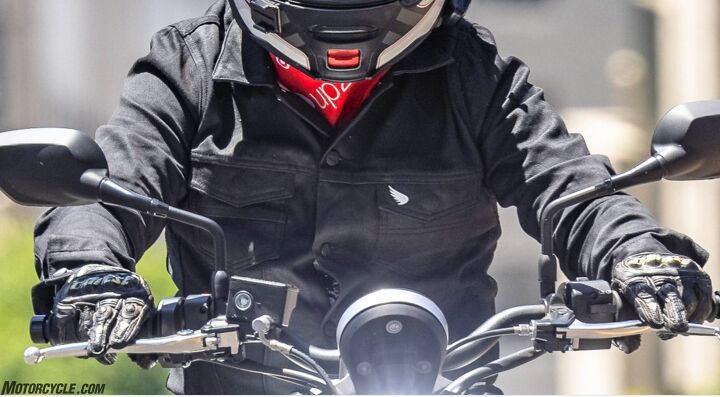 The two external chest pockets are too shallow for your cell phone but might hold a pack of Camel non-filters, which is to say they’re mostly decorative. Inside, there are deep pockets in front on either side, lower than where breast pockets would be. It’s more or less your old Levi’s jean jacket made out of miracle fabric.


Shop for the Sa1nt Unbreakable jacket here​
​
The Envelope please…


Fashionable though the Saint gear may be (depending on your sense of fashion), in an age where half of the MO crew has declared it won’t ride without airbag protection, any gear that offers absolutely nothing in the way of impact protection is better than gear that also offers nothing in the way of abrasion protection. Which is a run-on sentence way to say the Saint stuff is way better than riding in jeans and a jean jacket when it’s time to slide along the asphalt. The jeans are actually not bad, with the normal zip fly, one snap, and a shorter distance from butt to pavement in best-case crash scenarios. The jacket, with all those buttons and nothing to arrest the descent of your poor elbows, is for us, a no-go.

For this kind of money – $500 for the jacket and $400 for the jeans – you can find plenty of gear that’s just as fashion forward and more impact-absorbing elsewhere.


How should a motorcycle jacket fit?

If you only have one motorcycle jacket and you live in a place with weather (almost everyplace), then it needs to be loose enough to layer a sweater or a hoodie or some kind of warm layer inside when it turns cool. But you don’t want your jacket to be so loose that it fills up with air and makes you a hang glider, like we’ve all seen That Guy’s jacket do on the freeway. You don’t want bees and grit and stuff flying around in there. Ideally, you have a nice snug perforated or vented jacket for slicing cleanly through the air on hot days. And a slightly bigger jacket for layering under on cool days. Longish sleeves are good for reaching forward to the grips; a longer back is good for keeping drafts out of where they shouldn’t go at the rear.

How do you clean a motorcycle jacket?

What will jeans do in a motorcycle crash?

Regular jeans aren’t going to protect you much in a motorcycle crash at all. Even heavy denim wears through quickly when it’s abraded by asphalt, leaving your skin exposed to painful road rash. Good riding jeans, like the Saint Unbreakable jeans tested here, and their Dyneema fabric, are much better at abrasion resistance. Other similar jeans, which are heavier and hotter, line impact areas like the butt and hips with a layer of Aramid or Kevlar for abrasion protection. The best jeans go even further to also protect from impacts, with armor in the knees and hips.


——————————————————————————​
We are committed to finding, researching, and recommending the best products. We earn commissions from purchases you make using the retail links in our product reviews. Learn more about how this works.