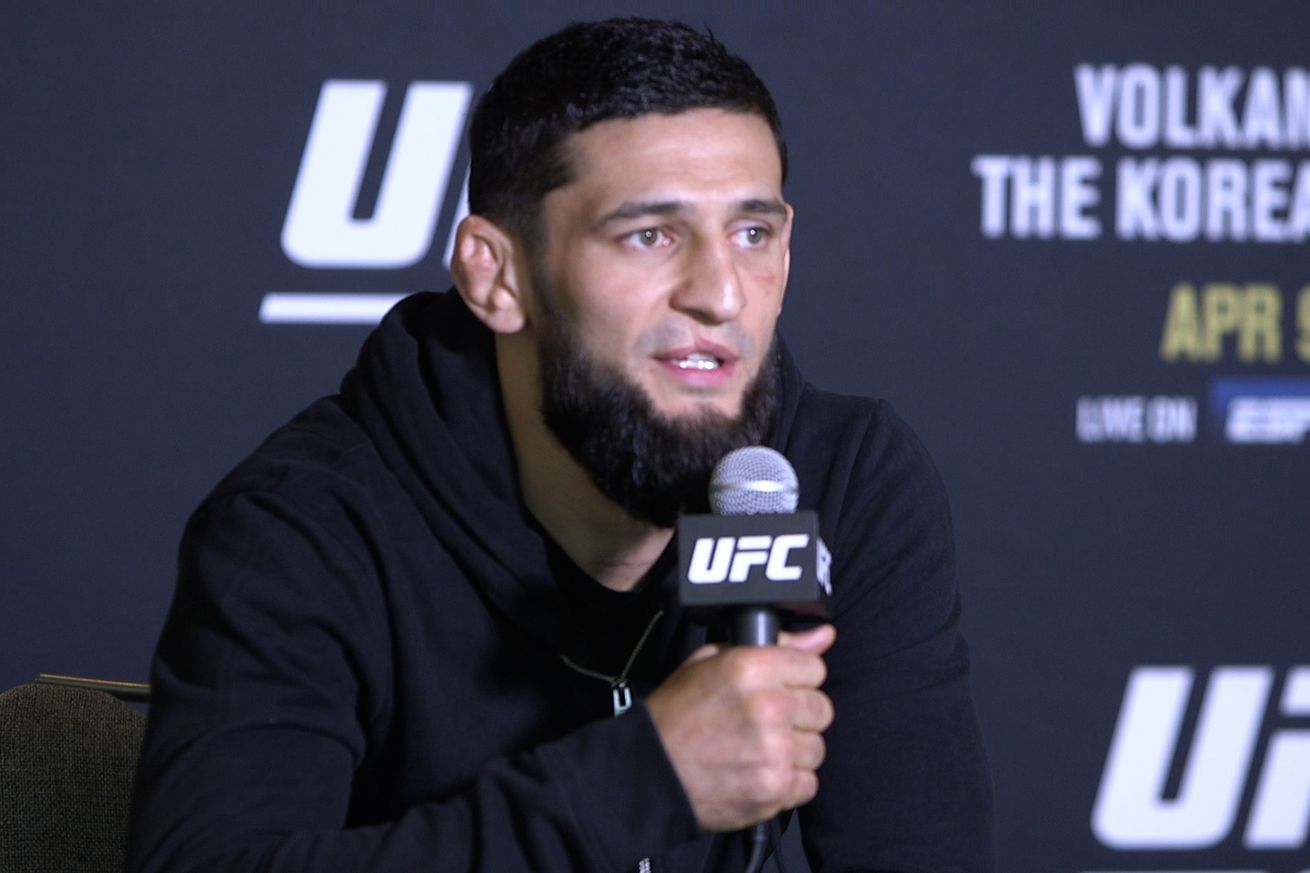 Khamzat Chimaev is just days away from the biggest fight of his career against one-time title challenger Gilbert Burns at UFC 273, but in his mind, the victory has already been secured and he’s just biding his time until officially claiming the welterweight title.

With an unblemished record including four wins in the UFC — all by first- or second-round stoppage — Chimaev has all the hype around him right now and he believes reigning champion Kamaru Usman is doing everything possible to avoid him.

“I’m already the champ,” Chimaev said during UFC 273 media day. “That guy doesn’t want to fight me. He goes out to do the surgery and then he wants to go do the boxing somewhere. He can fix his arm and then go do the boxing, I don’t know. The other guy [Leon Edwards], he didn’t fight somebody in the top 10.

“They always find some excuse. I am already the champ. People know that.”

Chimaev’s tirade aimed at Usman didn’t stop there, especially when the conversation turned towards the title as he seeks to beat Burns on Saturday night and become the No. 1 contender.

Of course, Leon Edwards has already been promised the next shot at welterweight gold but Chimaev has no interest in seeing him battle Usman.

Prior to his recent win over Li Jingliang, which was just his second fight in the UFC at 170 pounds, Chimaev had been matched up several times with Edwards but injuries and COVID-19 axed every attempt at that bout ever happening.

Chimaev has clearly moved beyond his desire to face Edwards and he doesn’t really plan on revisiting that fight down the road.

“He almost lost his last fight to Nate Diaz, that skinny guy,” Chimaev said. “It was five rounds and last round he gets tired? If he gets tired against Diaz, what am I going to do with this guy? He’s going to get tired after the first minute. I’m going to knock him out. This guy is not my level. People don’t want to see that guy.”

Truth be told, Chimaev isn’t all that confident that there will be much interest in watching him fight Usman either, but he knows that fight will allow him the opportunity to win a UFC title.

While he’s sticking around at welterweight for now, Chimaev knows the more intriguing fight would see him return to 185 pounds to target another champion instead.

“People want to see [Israel Adesanya] and me,” Chimaev said. “Nobody knows [Kamaru Usman]. He’s old. Izzy is more fresh and young like me and I think he wants me as well because he already fought everyone at [middleweight]. He’s like me. He wants to fight everyone. I want to do the same.”

Putting Adesanya aside, Chimaev is staying focused on welterweight for now but a win at UFC 273 could still put him in a precarious position if the promotion decides to move forward with Usman vs. Edwards.

Rather than take time off, Chimaev might need to face a different opponent to stay active.

One name that would likely stand out ahead of all the others for possible opposition would be ex-interim UFC welterweight champion Colby Covington, who is fresh off a win over Jorge Masvidal in March.

Covington has insulted Chimaev whenever his name gets mentioned, which makes “Borz” plenty interested in the fight, although he doesn’t think it will ever actually get booked.

With plenty to say about Usman, Covington, Adesanya and Edwards, what are Chimaev’s thoughts about the actual opponent who will be standing across from him at UFC 273?

Well it turns out, he doesn’t think much about Burns at all.

“What has he done in this division?” Chimaev said about Burns. “He loses when it comes to Usman. He loses and starts to cry. He beat old man, what’s his name? Demian Maia. Almost 40 years old. Who is he beating in there?

“I will fight [middleweight] or [welterweight] and he comes up from [lightweight] and he starts to cry when he loses his fight. He can’t do nothing to me. I’m going to smash that guy.”