Joanna Jedrzejczyk wants the winner of Zhang Weili vs. Rose Namajunas: ‘The baddest b*tch on the planet is back’ 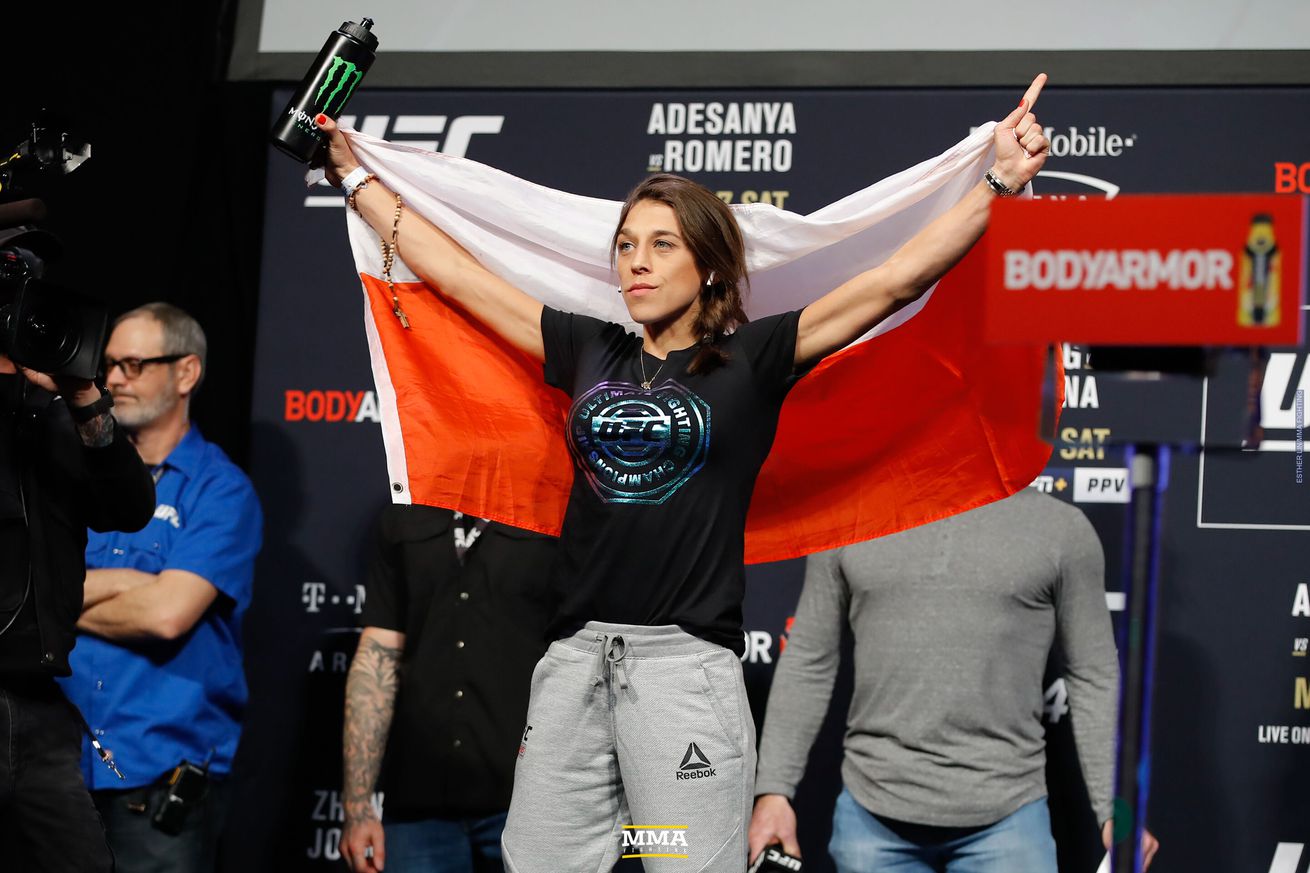 Joanna Jedrzejczyk is back and ready to reclaim her throne.

The former UFC women’s strawweight champion hasn’t competed since March 2020 when she engaged in a Fight of the Year against Zhang Weili but came up short in a razor-close split decision.

Since that time, Jedrzejcyzk has been primarily staying in her native Poland, working on a number of different business opportunities including a recent stint as a judge on dance reality show while also working on her autobiography as well as an upcoming documentary that will detail her combat sports career.

“I’m living my best life,” Jedrzejczyk told MMA Fighting. “With my personal or business problems, we all have it and I’m very happy. I take everything that’s happening in my life and I give a lot. I give 100 percent every single day in everything I do but I did as much as I can. I’m still an athlete because I really want to do it but I set my priorities. I have different priorities. I don’t want to be part of this crazy rat race because I was there.

“I was the champ for a long time. It’s been a while. I lost the title to Rose Namajunas but I know my value. I gave the fight of the year, the fight of the decade and I know I’m still very good. I don’t waste my time. I keep on training all the time. I can’t wait to get back to American Top Team. I’m doing a big TV deal in Poland but can’t wait to get back to the states and start training with my team again.”

According to Jedrzejczyk, the current plan involves returning to the United States at the end of May with at least two months of training at the Florida based gym while also hoping to attend UFC 264 in person to watch her teammate Dustin Poirier go to battle with Conor McGregor for the third time.

While she hasn’t officially booked a fight yet, the 33-year-old veteran already called the UFC matchmakers to let them know that she wants to face the winner of the upcoming title fight between Zhang and Rose Namajunas.

“I called Mick [Maynard] a few days ago and I just told him ‘you know what the baddest b*tch on the planet is back’ so book the fight, watch this fight and tell everybody that I’m next,” Jedrzejczyk said.

“I was waiting for this fight. It’s COVID time, so that’s the only reason why the belt was not stripped. Because once a year you have to defend the belt. But we’re having COVID times but when I was the champ, I was defending this belt like crazy.”

Jedrzejczyk has previously gone to battle with both competitors in the UFC 261 title fight so she definitely has an insight regarding the keys to victory for Zhang and Namajunas.

While she’s not willing to make a prediction, Jedrzejczyk definitely sees a path to victory for Namajunas despite coming into the fight as the underdog.

“I really believe that Rose Namajunas can outscore Weili Zhang but she has to be careful because Weili is powerful,” Jedrzejczyk explained. “But you know what, all the videos she’s posting and posting before my fight, these punches aren’t that hard. People will go crazy ‘how is that possible, your head was so big, it was so [swollen].’

“Of course it was [swollen] but something happened in my head and the blood was coming out but inside my skin, it was a hematoma but I’ve fought with stronger fighters. I didn’t feel that much power of the punches but I know that Rose can outscore Weili Zhang but Weili is a powerful girl. She’s a very powerful girl. For me, it’s 50/50.”

The UFC will actually be live streaming Jedrzejczyk’s reactions to the fight as it happens on Saturday night so she’s definitely excited to watch to see who comes out on top.

Jedrzejczyk isn’t rooting for either of them to win or lose but she certainly hopes to see one of them standing across the octagon from her later this year.

“I wish best of luck to both of them and I hope they will bring the strawweight division even higher than I did the last time with Weili Zhang,” Jedrzejczyk said. “But I feel like every time I step into the octagon, I break another barrier and limits and records. I did that many times with winning the belt, defending the belt and now with putting on such great shows.”

Of course, Jedrzejzcyk understands that calling for a title shot off a loss might seem unusual or even unwarranted but she vehemently disagrees.

In her mind, she’s earned that opportunity based on everything she’s already accomplished during her career not to mention the absolute war she had with Zhang in her last appearance in the UFC.

“I know there are so many people who are like ‘you lost, you have to prove it again.’ I proved it in my last fight, putting on f*cking hell of a show,” Jedrzejczyk said. “Giving the closest fight ever. That’s the thing. Fight of the year, no gender, no weights. It’s the ticket for the next title fight. That’s the thing. I just don’t want to fight for nothing anymore. That’s the thing.

“If I fight, I fight for big trophies and I don’t have to prove it to anybody.”

Nothing is set in stone yet but Jedrzejczyk has already laid out what she wants when speaking to the UFC and she hopes to have her next fight booked sooner rather than later.

“I want to get the winner of this fight,” Jedrzejczyk said. “I won’t stop. That’s the thing if I was losing fights by knockout or if I was losing the fights on points and the difference was big but it’s not. I always put on a show and the fights are very close so I want to keep on going.”