Engineer and mechanic Dan Kyle passed away suddenly over the weekend. Kyle tuned for dozens of AMA Supersport/Superbike and Formula Extreme riders and helped countless street riders through his shop Kyle Racing in SAND CITY, California.

Kyle was awarded AMA mechanic of the year for his work on the Two Brothers and Erion Racing teams in the 1990s. 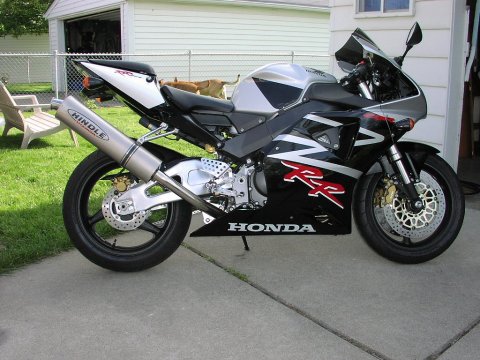 Dan was a valuable source of knowledge for tuning and chassis setup for CBR929 and CBR954 owners back in the day. He re-valved the forks on my 954 and setup an Ohlins rear shock to match.

MC, did you ever cross paths with Dan back in the day? Have any stories to share?

I used to buy Ohlins parts from him.

He was a source for our group buys on the ZRXOA forum, fine guy and easy to talk to.

Did a lot of business with Kyle racing. Not much lately.
Got a direct account with Ohlins
Sorry to hear

I bought many Ohlins parts from him, he was a smart guy.

Back in the day, 1987 ish, he picked me, John Long, and Logo up at the airport in California. We were heading to the GP at Laguna. Long was riding my RS250 and his TZ500. I had a freshly broken collar bone, so I was out of the race. Anyway, we stayed at Dan's house near Monterey. It was actually his grandparents house. Nice place, on the side of a mountain with a view of the ocean, sort of, lots of trees in the way. I remember seeing a old 60's car in either the house or the garage that was part of the house. It was a fugging Ferrari, maybe a 250GT. It was some little thing that looked like that, and it was red. The house and car would be worth tons of cash now. I seem to remember something about a fire and Danny Kyle a few years ago. Or not. He was always a super nice guy.

Lindeman, Kyle, is Sandy Kosman still alive, Rob Muzzy must be in his 80’s!

Team222 said:
Lindeman, Kyle, is Sandy Kosman still alive, Rob Muzzy must be in his 80’s!
Click to expand...

DavidDole said:
Last I saw not long ago from Sandy's daughter he is alive but in assisted living home not far from them
Click to expand...

I hope he is doing well, one of the good guys. I‘ve had some conversation with him over the years, he got and advertised in our CBX magazine, I worked out a discount for club members who used his wheel widening service. I sent him my CB1100F to be widened to use on my CBX, I made a little wooden shipping box for it and sent it off. I called him a week later for an update and he had a big laugh

on me and said “are you the one who built a crate for his rim? you must have a lot of spare time on your hands” I got it back from California in a plain heavy corrugated box, with a little note on the invoice written by him “hope you don’t mind but I burned your crate” making fun of me for sending a CB1100F rim to him, treating it like it was the Hope Diamond or something.

Dan has been very active lately (last year or so) on Facebook. Posting up pics of old bikes he was involved in etc. I never met him but of course knew who he was. God Speed Dan !!

Anybody know what got him? Pretty sure Tracy Hagen, who is credited for one of the pictures, is dead too. Tracy was a text book example of a nerd, if you looked up nerd in a dictionary, they used his likeness. Tracy was also a good guy, and had tons of connections. He actually bought a Honda NR750, had some grey market Honda's too.
You must log in or register to reply here.
Top Bottom