I used to pick it up in TJ on the regular. Just don't go to TJ anymore. I'll grab a few bottles next time we head to San Felipe. I just never think of it on those trips as we roll down there pretty well equipped

So last night a prepped and grilled some mere inch and a quarter thick steaks that had been marinated in a Hawaiian type marinade I pulled from the interwebs.

Five hours in a ziplock witha mix of 16 ounces pine apple juice, 1/2 cup brown sugar, 10 ounces of low sodium soy sauce, 4 ounces of apple cider vinegar, and inch of crushed/cut ginger, a couple of scallions and five cloves of garlic.
Heated just enough to blend/dissolve the sugar.
Quite strong to the taste after heated and before putting it on/in the steaks.

Zip-loc the steaks, cover them with the marinade, push as much air out as possible, 4 hours is plenty of time to let them soak.

Tender like the day is long and a faint sweet/tart flavor/after taste.
Not unpleasant at all.

I skipped the glaze because I had to perform washing machine repairs just as I got to where the grill is.
This caused me to become distracted so, I completely forgot about pictures so, all I got were these Bert shots.


This morning, my darling daughter needed her nails done so, into the big city early this morning.
Dear God! how the fuck do these people stand to be in that place?
My eyes were watering and I could hardly breath with the heavy scent of acetone fumes or whatever the fuck it is.
Burning/un-burnt nitro methane is easier to breath.

Anyway, I didn't hang around for the two hours and went looking around at a couple of local stores.
Daughter get finished with her nails and since there's an Osaka Steak and Sushi bar just a couple of door down so I asked her if she'd like to get some sushi.
Well duh!?
"Daddy, I want to try some of the baby octopus!"
We get some along with another $60.00 worth of various sashimi.
Fuck! why weren't the portion sizes more clear?
It was pretty good stuff but, I wish I'd had a designated driver so I could have some warm saki too.

Daughter does try one of the baby octopi and I have to eat the rest.
Only one went into the doggy box along with the other pound of sushi we couldn't finish there.
I sit working on the last four pieces in wasabi saturated soy sauce so,
by morning, I should be able to shit over a ten rail fence.

BigGar said:
Too bookoo for me.
Click to expand...

Leftover boneless pork chop from the grilling the other day, for breakfast today along with some fresh picked, this morning, black berries.
Sis doesn't like beef so I had made those for her but they don't come one to a pack so, I had two left over.
Seasoned with Cavender's on one side, Old Bay & lemon pepper on the other side, black pepper an tiny bit of sea salt on both sides.
30 second sear on both sides, wrapped in foil afterward and place over indirect heat for 7-10 minutes.
Tasty and moist after reheat in same foil!

Still waiting for the impending attack from all that sushi I stuffed down my gullet yesterday...

Hey Frenchie, here in 'merica, we say boofuckin'koo and spell it any way we fuckin' want!

BigGar said:
Hey Frenchie, here in 'merica, we say boofuckin'koo and spell it any way we fuckin' want!

I was waiting for some epic reply like this :

Coconut oil in the pan to toast the rice before adding chicken broth.
Shallot, yellow onion chopped fine along with 4 cloves of garlic in the oil heated until translucent.
Couple of tablespoons of butter.
Dump cup of rice in and mix around until toasted nicely, browning garlic. onion and shallot.
Dump low sodium chicken broth and covered.

Sauce pan gets five brauts gut into discs, 1/4 cup of a fore mentioned chicken broth, butter,
a few dashes of Old Bay, maybe four tablespoons of Texas Pete, heat until reduced and sausage is browning
A shot of Crown Royal another 10 or so minutes of reducing after rice is resting.

Spoon of rice, a spatula of braut discs, another spoon of rice and more brauts.
Sea salt on top to taste.

Not to bad for an evening meal and the kid likes it too.
OP

Holy shit. Just tried Weller's 107. Fucking amazing. Can't get a bottle. It's hard to find. The search is on.

Weller's 107. This shit is under $30 a bottle when it's available. Then the hoarders set in, and prices climb. I'm going to watch for it. 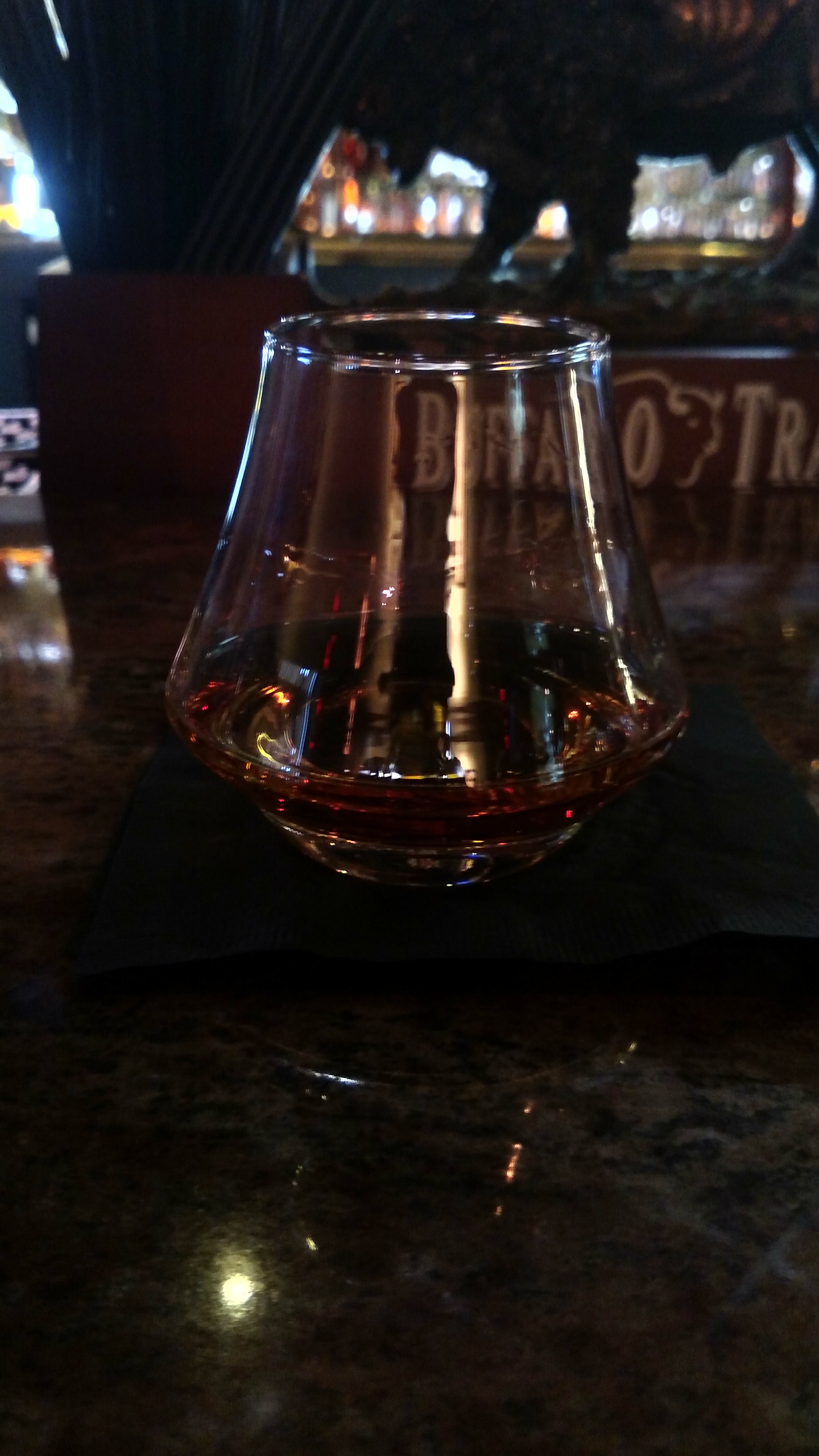 And this came home with me tonight. 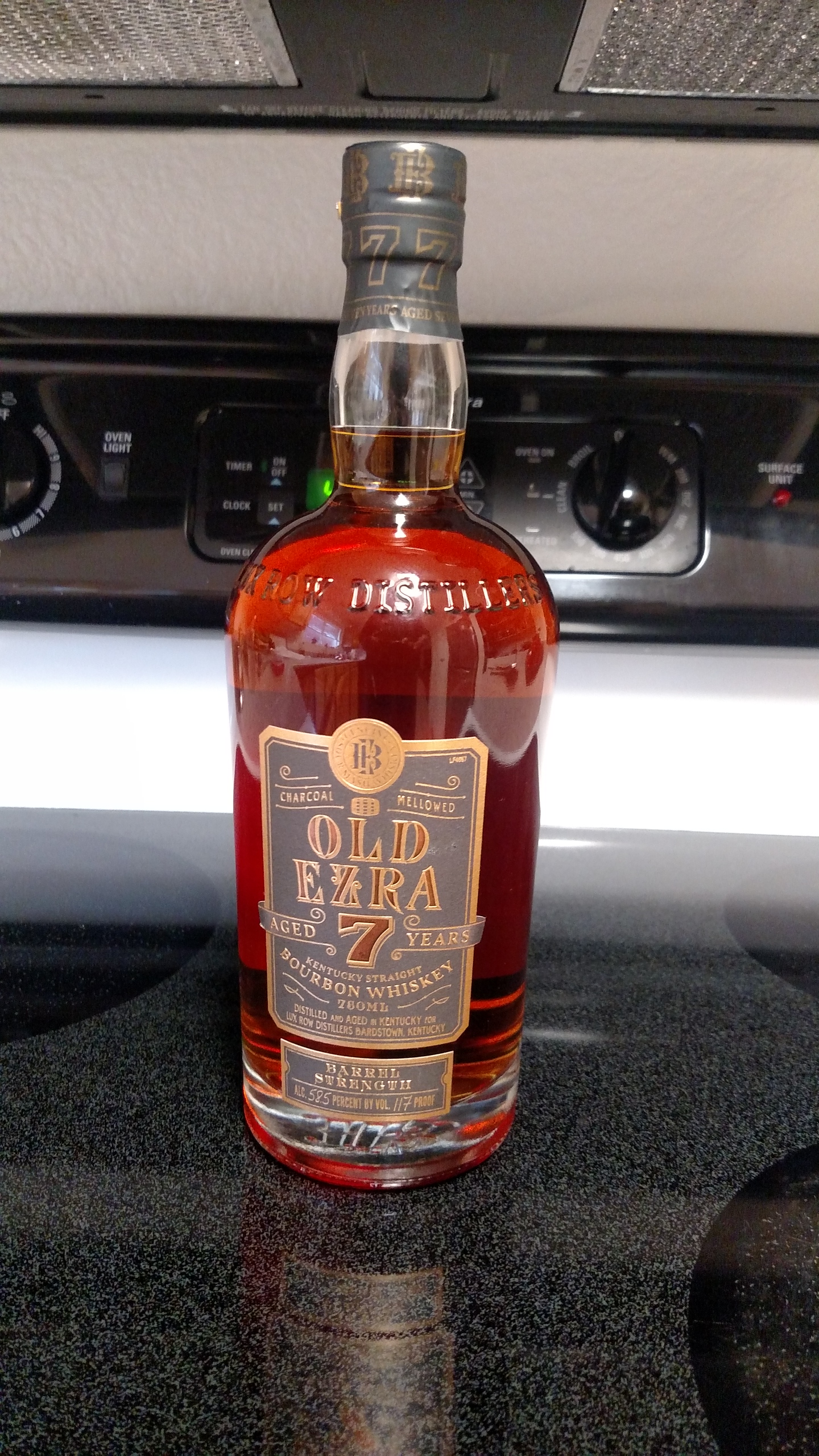 I now have 16 different bourbons. I'm going to make a Sweet 16 ladder and have a taste-off.

The bourbons in their new home. FTW! 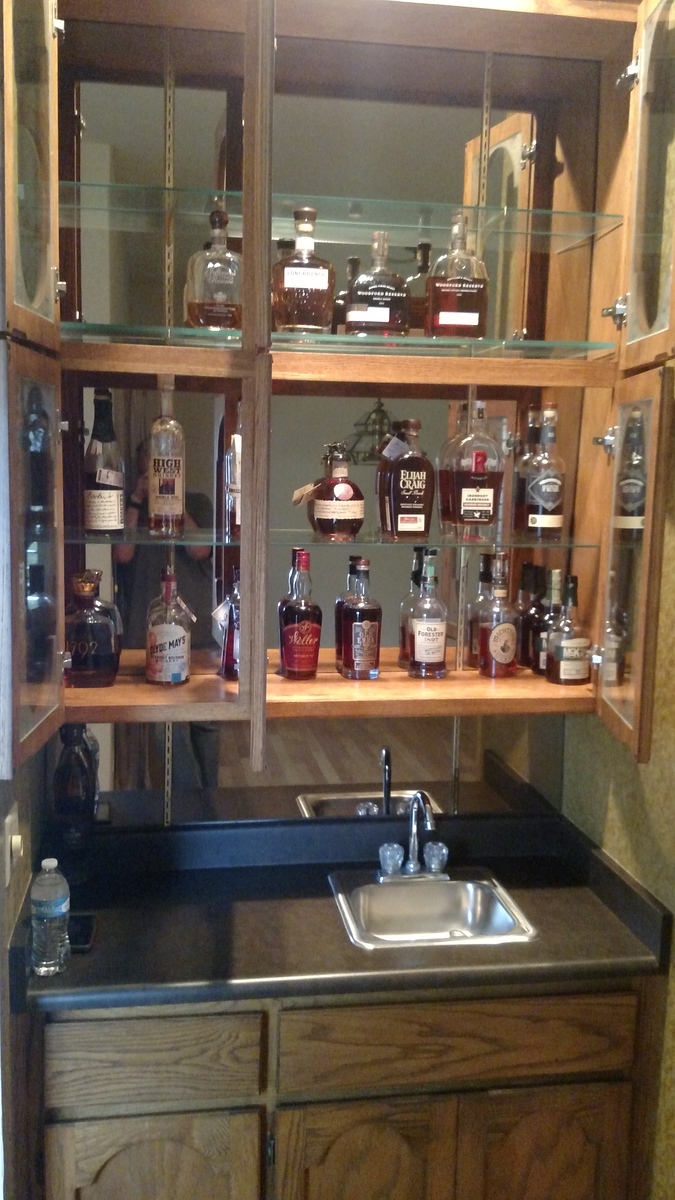 I didn't build the fucking place. And maybe back in 1980, that was the norm.

a scrap piece of granite or marble plus pay $50 for a sink cut out would look great there... ditch the mirror/medicine shelf motive & get some floating shelves from Ikea or the like. Also pony up for a non 1960 looking faucet... The bourbons will be happier.

Amazing how many interior design bikers on here

BTW, what is a goo way to do this, other than what is already in place?

Terry_Schiavo said:
a scrap piece of granite or marble plus pay $50 for a sink cut out would look great there... ditch the mirror/medicine shelf motive & get some floating shelves from Ikea or the like. Also pony up for a non 1960 looking faucet... The bourbons will be happier.

Good ideas. I'll git her done sooner or later. First big buck priority is new carpet in the entire house and appliances. Then we start attacking the tacky lighting, wallpaper, and other shit.

BigGar said:
You've inspired me to pour a Booker's with too much ice for L/S

Ain't that shit great? The Wellers on the shelf is a new grab. That's tits.

scottcolbath said:
BTW, what is a goo way to do this, other than what is already in place?

Hmmm, usually pinterest is your friend here, but can't find anything to my liking... 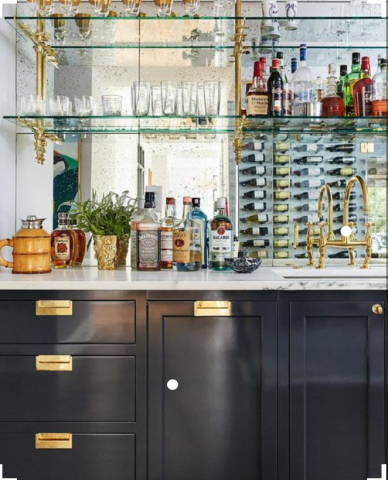 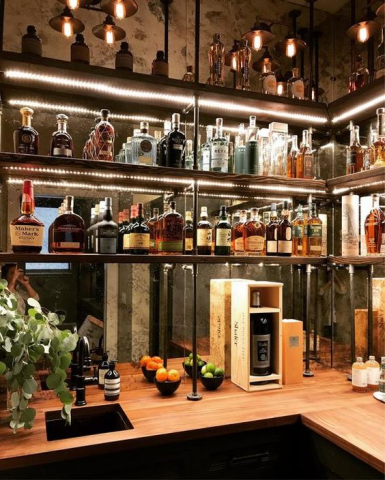 scottcolbath said:
Ain't that shit great? The Wellers on the shelf is a new grab. That's tits.

Finished my bottle. There were two nice pours left. Kind of forgot how 127 proof gets your attention. I'm kind of flyin' here.

How come you have so many full bottles of alcohol in your house?

Wouldn't happen in my place...
OP

Mr Lucky said:
How come you have so many full bottles of alcohol in your house?

When you have that many, it takes a while go get through them. Also, I'm not drinking that stuff every night.

S.C.
You must log in or register to reply here.
Top Bottom