“Easy to ride, measurably comfortable and stylish to boot,” concluded D. Gingerelli’s review of the excitingly overhauled H-D Sportster ten years ago – now with radial tires! To see how far the Motor Company has come in the decade since then, check out the actually new 2021 Sportster S: It’s almost enough to give one hope.

How Low can you go?

Harley-Davidson’s top-selling entry-level bike, the XL883L Low, just got better. In fact, it’s so improved that you might say that this “Shortster” has reached new heights in terms of ride comfort and stability for new and experienced riders.

Here’s the deal: Harley gave the Low a complete makeover for 2011 to improve its suspension for a softer, more compliant ride, while maintaining the low seat height of 25.3 inches – same as on the 2010 edition. But the new model’s chassis is so improved that the revised bike deserves a new name. Enter the SuperLow for 2011.


Visually, the SuperLow appears to be pretty much the same low-to-the-ground model that’s become a favorite these past few years among first-time Harley buyers and women riders. Now here’s the catch: in reality the SuperLow is an all-new model that’s only based on the low-rider theme. In truth, the SuperLow checks in with new suspension calibrations front and rear, new wheel and tires sizes, new fork and gas tank, even a new and better-padded solo seat.


“It’s really a whole-new bike for us,” says project manager Greg Falkner. The result is an entry-level bike that performs so well that SuperLow owners may want to keep their bike even after they gain more experience and confidence in the saddle.

“This bike should continue to suit them as they gain more riding experience,” touts Falkner. In short, this low-riding bike is more than just a beginner’s motorcycle, a stigma that, in the past, has haunted the 883L Low. The SuperLow is a bona fide bike that should appeal to riders of all skill levels, especially those with short inseams. 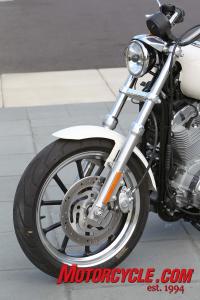 The SuperLow’s new 18” 5-spoke wheel weighs substantially less than the 19” on the Low.


So how did Harley retain the low seat height while improving the ride? “We made more room under the rear fender for more wheel travel,” explains Falkner. Look at the specifications and you’ll see what he’s talking about. Even though the rear wheel diameter was increased from 16 to 17 inches, wrapping the new five-spoke wheel with a low-profile Michelin radial tire helped reduce overall height. This reduced rear tire height allows for more wheel travel under the fender, so the engineers were able to develop a set of longer-travel shock absorbers (about 5/8-inch longer than the Low’s) for the SuperLow. The new shocks also have recalibrated damping rates to help smooth the ride. You’ll especially feel the difference on the compression stroke where the new shocks and springs do a much better job of soaking up the bumps.The engineers relocated the ECM (electronic control module), too, moving it from beneath the seat to the steering head. The vacant space made way for more padding in the seat itself, in turn elevating rider comfort, but not the rider. You’ll notice the difference right away, and appreciate it even more after riding a few miles down the road.

There are some subtle improvements up front, and much of the technology was gleaned from the XR1200 model. Foremost, the wheel diameter was reduced from 19 to 18 inches, and a Michelin radial used there, too. The fork legs have slightly recalibrated settings, so the springs are less apt to bottom under normal riding conditions. Wider triple trees spread the legs ever so slightly for the new lighter-weight wheel, in the process giving the bike a more masculine appearance plus more lock-to-lock rotation.


In addition, the new triple trees slightly altered the steering angle and trail to maintain the neutral turn-in attitude found on all Sportsters. H-D engineers describe this as “intuitive handling,” meaning that the bike responds to rider input in an almost programmed manner. That’s especially important considering the SuperLow’s primary audience of newer, less-experienced riders.

A more compliant ride isn’t worth much if the bike’s ergonomics aren’t suited for the rider. And so, for 2011 the SuperLow checks in with more handlebar rise. Think of it as a mini ape-hanger, a trend that’s especially fashionable among the cruiser-bike crowd these days. Your arms maintain a relaxed stretch when reaching to the small-diameter handgrips, and the new seat is placed slightly rearward on the frame so there’s more legroom available when placing your boots on the mid-controls.


The relocated seat also makes room for the SuperLow’s new gas tank, the larger 4.5-gallon fuel cell that originated with the 2004 XL1200C Custom. The new tank (the Low relied on the old peanut-style 3.3-gallon tank) helps lower the bike’s silhouette, yet stretches riding range. Cruising at 65-70 mph delivers up to 50 miles per gallon, so you can easily go 200 miles on a tank of gas.

Nothing was changed to the powertrain, so the SuperLow delivers the same response from its 883cc engine as found on the Low. After the ECM spools up the electronic fuel injection, give the electric-starter’s thumb button a soft push with your thumb. The motor fires right up, settling into a gentle idle. Click the five-speed transmission into first gear, release the easy-pull clutch lever, and the SuperLow motors purposely away.

A minor upgrade to the final-drive gearing helps transfer power in a smoother, more linear manner, too. The final-drive ratio is lower (the final-drive ratio number itself is higher) for easier, snappier acceleration. The goal was to allow the rider smoother throttle control at low speeds, especially when putting through parking lots and such. As a bonus, roll-on power in the mid-rpm range is also slightly more responsive to the rider’s commands.

But the big news about the SuperLow is in how it delivers a more compliant ride for such a low-riding motorcycle. Compared to the Low that it replaces, the SuperLow glides over most bumps, potholes and frost-heave joints with ease. The radial tires also enhance its steady road manners even more.

Despite these improvements, you always need to keep in mind that the improvements can help a bike only so much. The abbreviated suspension eventually bottoms out sooner than you’d like. And, as with any low-riding motorcycle, there’s minimal cornering clearance. In terms of the SuperLow, the footpegs and the lower right-side muffler have a tendency to rub asphalt when bending the bike too far into a turn. (Our biggest complaint when we compared the Low to a Honda Shadow RS in this shootout.)

Otherwise, owners will be rewarded with a bike that’s easy to ride, measurably comfortable and stylish to boot.