And in those days, ten years ago, there was a pestilence upon the land in the form of the custom chopper. That pestilence was exterminated by the implosion of the Housing Bubble and the sudden drought of Home Equity, but Honda’s new custom chopper was already years in the making by then, and what’re ya gonna do? Not a huge hit for Honda, the Fury is still scattered thin upon the land – maybe because few chopper enthusiasts thought “Honda” when shopping for a new motorcycle. And that is a shame, brethren, because like all Hondas the Fury was in fact a perfectly pleasant and reliable conveyance. Radical though it may have appeared, a trail figure of 3.6 inches meant this raked-out chopper handled perfectly normally, and a curb weight of 663 pounds isn’t bad at all when your hindquarters are just 26.9 inches from the earth. Yea verily, Honda will sell you a brand new 2020 Fury, in Pearl Hawkseye Blue, for $10,599. That’s $2400 less than the original, and probably about what you’d pay for a used Craigslist chopper with “over $60k invested.” Crazy, goofy world without end, amen.

A chopper from Honda?

By Kevin Duke Feb. 27, 2009
Photos by Kevin Wing
There’s irony in the fact that Honda, the “nicest people” company, is now building what in our modern vernacular is a chopper, a genre previously associated with ne’er-do-wells, tattoos and hard living.Honda is known globally as an engineering powerhouse whose R&D efforts are second to none in the motorcycle world. But a chopper-style motorcycle, with its extended wheelbase and raked-out front end, forces dynamic compromises not present in other classes of bikes.

So the question is: In a market segment with a heavy accent on form over function, can the 2010 Fury find the right balance? After a day of riding this outside-the-Honda-box creation, we can reply in the affirmative.


Millions of TV viewers have been exposed to the world of custom bikes via shows such as American Chopper and Biker Build Off, firing the imagination of those who reside in Middle America and speaking to an audience beyond the outlaw biker crowd typically associated with so-called choppers. The Fury presents an opportunity for Joe Six-Pack to enter this rebel genre backed by a highly reputable company.

If you’ve read our report from the Fury’s sneak preview, you already know the stretched, flowing design is an eyeball popper and quite a departure from the normally conservative Honda. This sleek beauty gives appreciative eyes dozens of areas to ogle.


[TR]
[TD]What Honda did right on the Fury[/TD]
[/TR]
[TR]
[TD]• Frame: The requisite chopper stance is provided by the tall steering head. Frame tubes, nicely color-matched, are on full display, especially at the triangulated steering head. “The negative space is very important,” says Conte.[/TD]
[/TR]
[TR]
[TD]• Fuel tank: Tanks are a focal point of any motorcycle, and here Honda has hit it out of the park. Its sculpted design sitting high atop the frame’s backbone tube looks sensational, made extra distinctive by its character lines that gently arch as they run down the flanks. It ranks as among the prettiest fuel cells ever fitted to a production bike.[/TD]
[/TR]
[TR]
[TD]• Wheels: The multi-faceted nine-spoke front wheel looks sensational, especially the right side where it’s not obstructed by a brake rotor.[/TD]
[/TR]
[TR]
[TD]• Fender: A close-fitting fender that wraps tightly around the radius of a front tire is fairly uncommon in the realm of production bikes. The Fury’s is lovely.[/TD]
[/TR]
[TR]
[TD]• Headlight: Chrome, of course, and jutting proudly into the wind with a gentle arch and a subtle eyebrow.[/TD]
[/TR]
[TR]
[TD]• Engine: Creating a liquid-cooled motor and having its attendant plumbing look clean is incredibly difficult. Honda packaged the unobtrusive radiator neatly between the frame’s dual downtubes, and the radiator hose leading to the forward cylinder is cleverly concealed beneath the valve cover in a patented arrangement.[/TD]
[/TR]​
You already know if the Fury’s design appeals to your taste buds, but we’re now able to share with you how the bike works as a vehicle in motion. We spent a day cruising around the Pacific Coast in northern San Diego County, putting the Fury to the test in a variety of cruiser-type environments.

Straddling the Fury for the first time, a rider is greeted by surprisingly hospitable ergonomics. My 5-foot-8 bod appreciated the modest reach to the handlebars and the secure footing provided by the low 26.7-inch seat height. Amazingly, the ergos were also well-received by the 6-foot-5 Barry Winfield, another journo on our ride. He praised the Fury for having “one of the better cruiser riding positions” and liked its well-padded seat.


Fuel-injection ensures immediate ignition, and the rumbling lope of the 52-degree V-Twin pleasantly shakes a rider; dual counterbalancers keep vibes from becoming objectionable. The 2-into-1-into-2 exhaust produces an appropriately butch note, louder and meatier than the three carbureted bikes in the VTX1300 series which use a similar motor.

One of the Fury’s big tests comes early – maneuvering such an elongated bike around the confines of a small parking lot can cause some anxious moments on some choppers, as they are often afflicted with unexpected responses at low speeds. But Big Red’s chopper is remarkably balanced and agile for a bike with the longest wheelbase (71.2 inches) of any Honda ever created. A moderately fat 200mm rear tire doesn’t make the bike reluctant to turn like a silly-fat tire does, and the bike exhibits nearly zero front-end flop that is present at low speeds on many other raked-out cruisers. Even feet-up, full-lock U-turns on a two-lane road don’t present much of a challenge.

Indeed, the Fury generally functions as a proper motorcycle. Clutch and shift efforts are quite light and smoothly operating, and the injected the 1312cc mill has immaculate throttle pickup. Being shaft-driven, a rider feels some jacking of the rear end under acceleration, but it’s only really noticeable when you’re riding like a jackass. I occasionally forgot to remember I was on a cruiser, thus I have this info.

Suspension is a good compromise of comfort and control, considering the dynamic compromises forced by the slammed look and low seat height. The hidden rear shock benefits from an easy-to-adjust hydraulic preload knob and rebound-damping screw concealed beneath the bike’s right-hand sidecover. Though the initial setting was fine for the 200-pounders in our group, it proved too stiff for my 145-lb weight. It took only about 20 seconds to back off two positions of preload, and the smooth ride I’d hoped for magically appeared.

In recent times, we’ve seen motorcycle engines pushing the 2-liter mark and beyond, and so the size queens out there might be underwhelmed by the Fury’s 80 cubic inches. And yet its moderate amount of power isn’t disappointing in this application – there was an era not long ago in which 1300cc was about as big as it got, and there’s plenty enough power on tap here to easily scoot away from cager traffic.


During the Fury’s gestation period, Honda had considered using the VTX1800 engine, but it presented many styling and packaging problems. Airbox and exhaust volumes need to be larger, as does the radiator. “The 1300 fits the personality of the bike,” Conte says, noting its single-pin crankshaft that provides a loping vibration which adds to the rumbly character. The VTX-18’s motor would’ve also added considerable weight to the project, currently a reasonable 663 lbs full of fluids and fuel.

Packaging is still a bit of a compromise with the 1300cc powerplant. The space for a rider’s right knee has to be negotiated with the large airbox and the rear cylinder’s offset position and its exhaust header. In stop-and-go traffic, the radiator’s fan will click on quietly buts sends only minimal heat toward the rider. The Fury’s horn is hidden neatly behind the shifter and footpeg.


A cruise up the freeway to our lunch stop gave us time to admire the Fury’s clean looking cockpit with an attractive but minimal gauge pack; the view is spoiled only by the mess created from the exposed throttle cables, brake lines and electrical wiring. Despite short stalks, the mirrors are quite useful and free from blurring. The fists-punching-the-wind handlebar position feels both aggressive and comfy, and the bike is happy enough bombing down I-5 at 80 mph.

A pair of disc brakes proved to be adequate for the Fury’s intended use. The front rotor, despite looking diminutive inside the large 21-inch front wheel, is a considerable 336mm in diameter. However, the lever needs a good squeeze in order for the twin-piston caliper to bite strongly. Adding input from the rear brake on a long-wheelbase bike like this significantly reduces stopping distances, and the Fury’s 296mm rear disc proves to be powerful while nicely resistant to locking.

Honda’s market research says customers want anti-lock brakes, so beginning this fall an ABS Fury will be available at a $1,000 premium. The system also includes Honda’s Combined Braking System of linked brakes, but the crossover happens solely through the rear-brake pedal; the hand lever applies only the front brake. If you like the ABS option, hopefully you also like the black Fury, as that’s the only color on ABS-equipped bikes.

Non-ABS Furys will be available this April in five colors, and we’re impressed by an MSRP that seems reasonable considering the bike’s dramatic styling: $12,999.


Unfortunately, this rational price tag comes at the cost of some componentry that is below the standard of high-end choppers that Honda draws comparisons to. Many of the bikes bearing Soichiro-san’s name have switchgear a step above its Japanese competitors, but not so here. The turnsignal switch borrowed from the VTX1300 series feels cheap in relation to the apparent high quality of the rest of the bike; the VTX1800s have a higher-end component that would’ve been a better choice. Also, the polished switchgear housings look dull next to the brightly shining chrome handlebar. 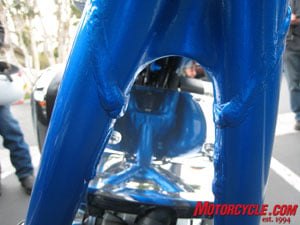 Honda’s typically high level of finish isn’t evident in these welds. (I take credit for this photo not because I’m proud of it but because I don’t want ace lensman Kevin Wing to be blamed for it.)


But the most glaring deficiency in the Fury’s finish quality are the sloppy welds visible on the exposed frame tubes around the steering head. Even the hammer-handed Teutels of American Chopper fame would’ve done a nicer job.

Where the Fury matches up with the typical custom-builder crowd is its regard for a passenger’s comfort. The Fury’s pillion saddle is either a disaster or devilishly clever; its rearward slope offers little resistance to sliding off under acceleration, forcing a passenger to hold on tightly to the rider. An optional backrest, part of several Fury accessories available at the time of launch, will be a prudent investment.

Some may baulk at Honda’s description of the Fury as “radical.” Sure it’s not mind-blowing in the way a $60K custom can be, but it’s worth noting that not even Harley-Davidson has produced a bike with a rake angle so stretched or a wheelbase as long. So let’s admit that, for the normally staid Honda, the Fury is radical.

And to get a radical chopper with Honda levels of quality for just $13K seems like quite a bargain. See you at Sturgis!