Following in the steps of other popular customization projects of the BMW R 18, seven BMW Motorrad sales partners in Poland took their own swing at a new look for the premium cruiser – from an R 18 inspired by a popular American cartoon character to one modeled after the Japanese style of bobber-style motorbikes (and a famous painting from that same country) and everything in between. For more information, read the press release from BMW Motorrad below. 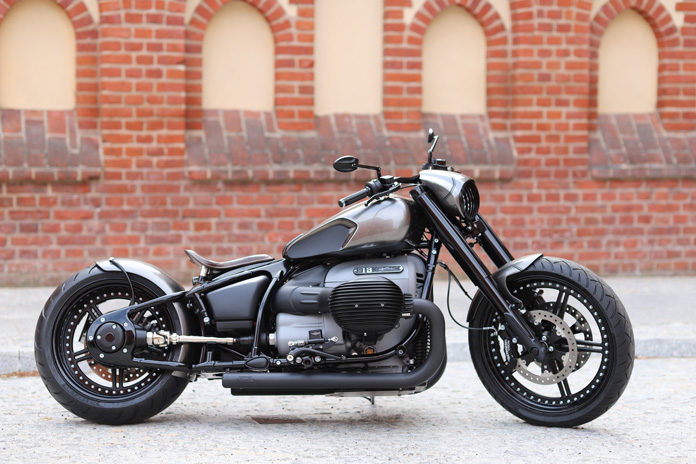 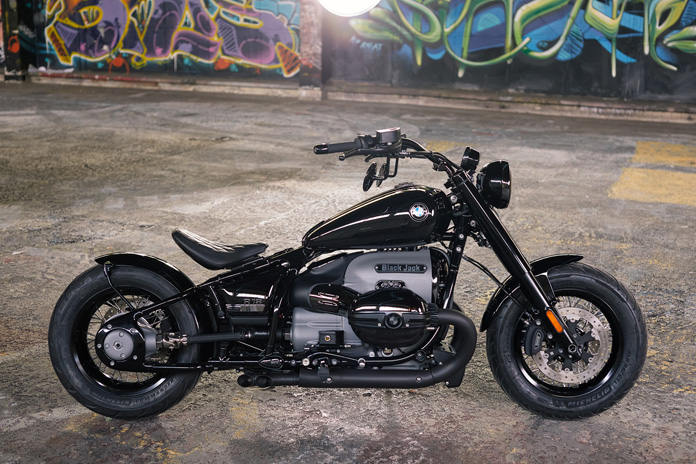 Black as night, from crown to sole, the R 18 Black Jack is presented by BMW Motorrad sales partner ZK Motors in Kielce. The customizers not only used black lacquer but also applied black chrome extensively, which gives the R 18 Black Jack a very special high-grade appeal. 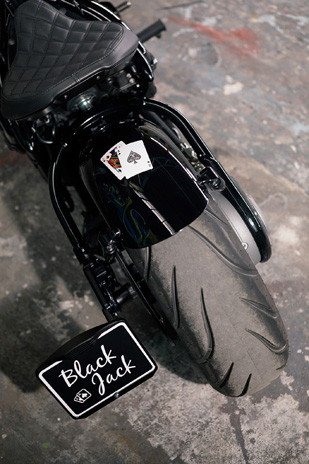 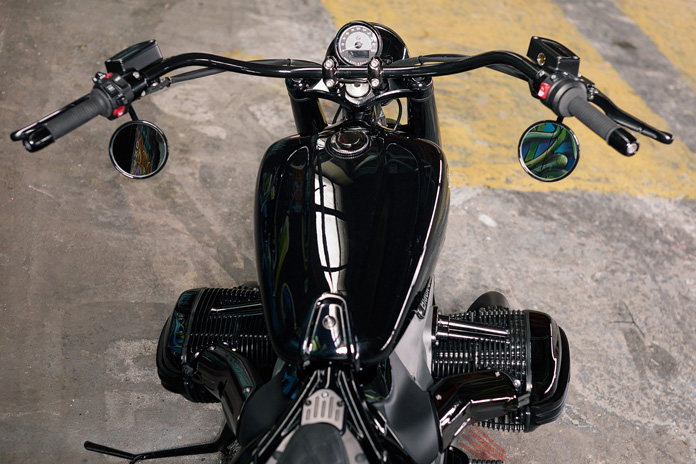 Small 16-inch wheels with big-sized tires give the R 18 Black Jack an elongated, low, and masculine appearance. The thoroughly black look is further enhanced by a matte black sidepipe-style exhaust system and high-grade milled elements. The cylinder head covers and the engine casing cover feature milling trim from Roland Sands Design, and the “Black Jack” emblem on the engine has also been milled from aluminum. 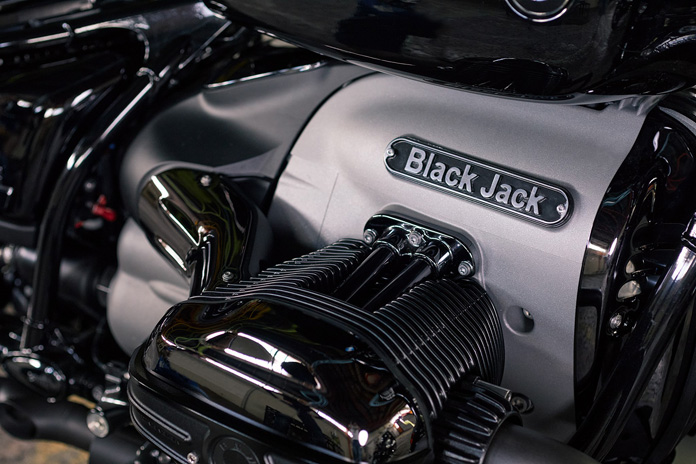 Other black parts such as hand levers, the front indicator lights, and the indicator and rear lights recessed into the holder of the rear fender round off the harmonious design. The quilted single seat, tinted headlight lens, and the license plate holder on the left also blend in with style. Two Black Jack cards on the rear fender are the icing on the cake. 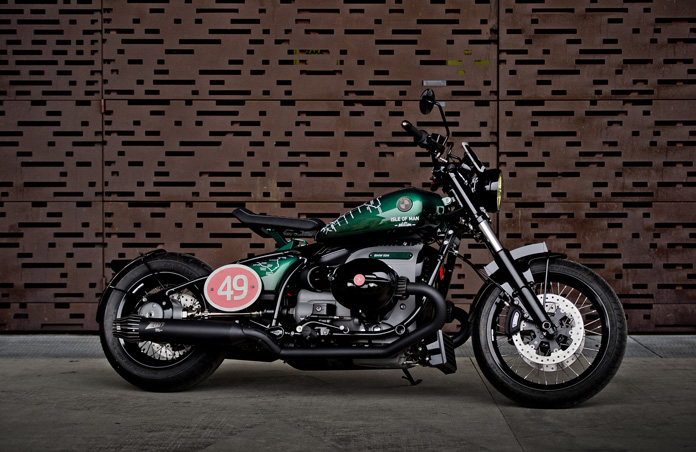 The famous Isle of Man, where the Tourist Trophy has been held since 1907 and where Georg “Schorsch” Meier won the Senior TT for BMW in 1939, inspired BMW Motorrad sales partner Dobrzanski Team Customs in Kraków to create the sporty BMW R 18 Isle of Man. 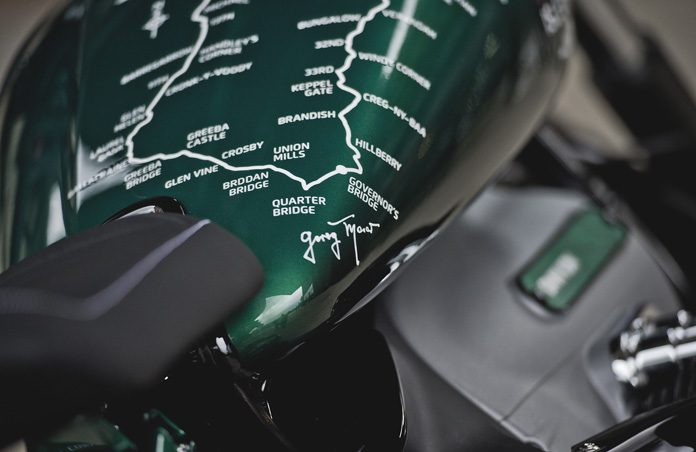 The design of the BMW R 18 Isle of Man evolved from the heritage of Georg Meier’s victorious BMW factory racing machine, the BMW RS 255 Kompressor. Adorned with “Schorsch” Meier’s starting number 49, this motorcycle ties in with the tradition of road racing and represents the history of the Isle of Man as a special place for motorcyclists and for the history of BMW Motorrad. 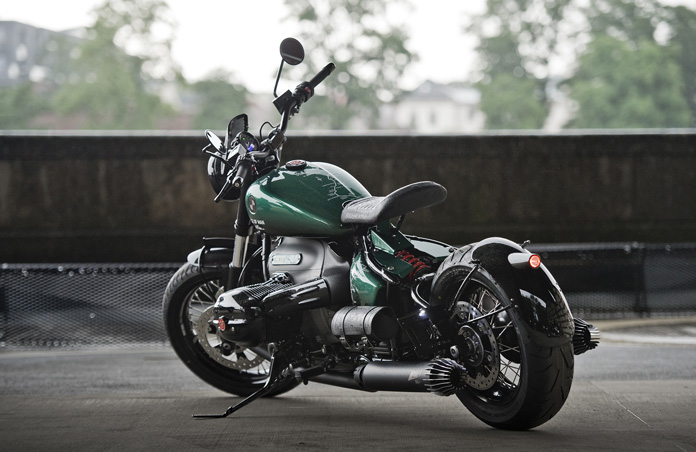 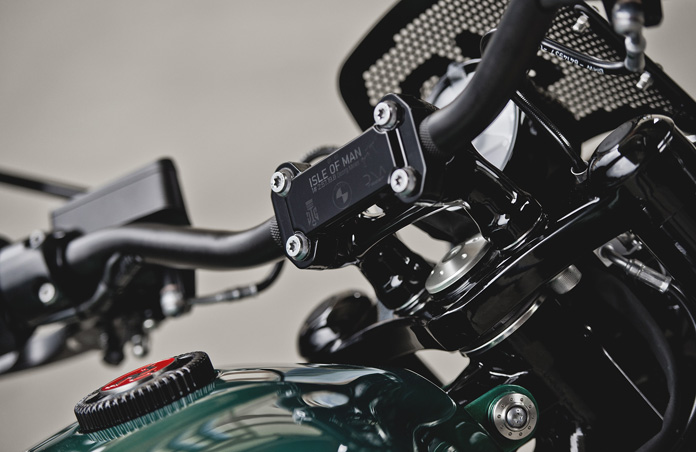 The “Isle of Man green metallic” paint finish, familiar from the BMW M4, defines the bike’s dynamic look and emphasizes the love of speed and the affiliation to the world of exceptional BMW vehicles.

Nine Hills Motorcycles in Chełmno is a renowned tradition-steeped Polish company, led by a true enthusiast: Paweł Stachura. His designs are recognized all over the world, and the motorbikes have already triumphed on the world’s best custom stages. As a partner of Liberty Motors Piaseczno, this commissioned project based on the BMW R 18 called Liberty includes handmade body components designed from scratch, such as the fuel tank, front and rear fenders, the seat bench, lamp trim with small LED headlight, and the handlebar. 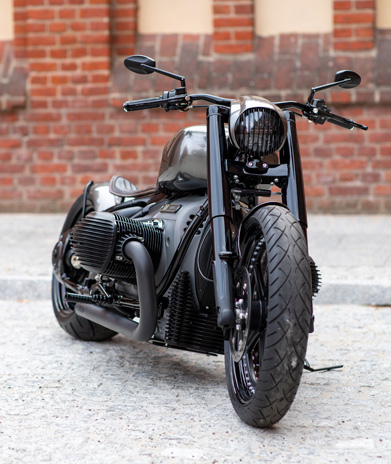 Special features include the round instrumentation integrated into the tank center tunnel, tank filler necks that are flush with the tank surface and can be opened under pressure, and exclusive leather components that are also handmade, including the seat upholstery and side pocket. The chassis has a lowered and fully adjustable rear suspension, a slightly lowered fork, and three-piece wheels from Rick’s Motorcycles, sized 8 x 18 inches at the rear and 3.5 x 21 inches at the front with 240/40-18 and 130/60-21 tires respectively. 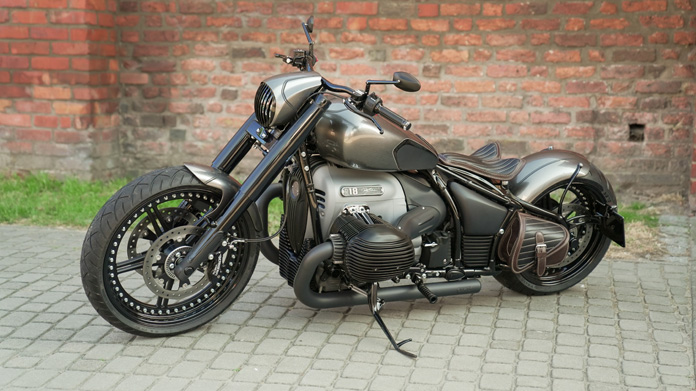 Numerous CNC-milled parts such as cylinder head covers or the specially designed oil cooler, as well as brake calipers and footrests from Beringer, tastefully complement the R 18 Liberty, which is elaborately painted featuring airbrush work. A short black FCR exhaust system rounds off the stylish look. 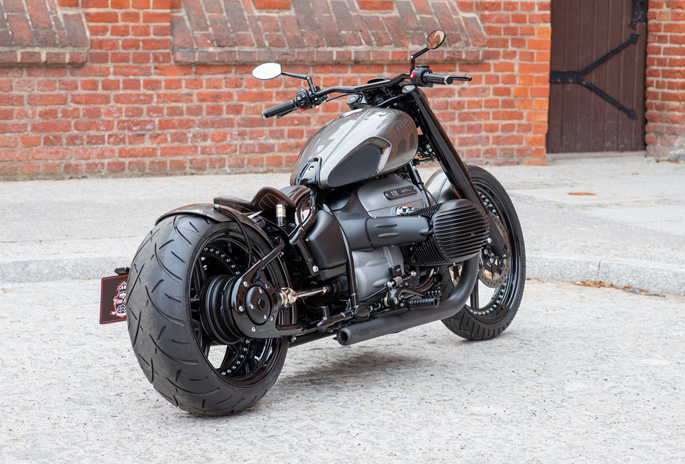 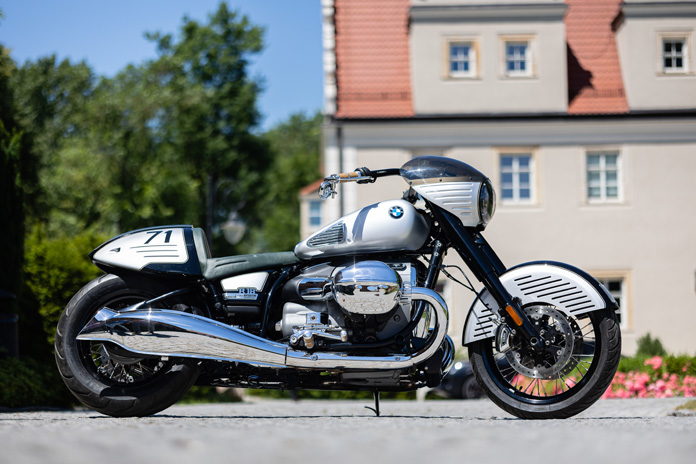 BMW and MINI sales partner Inchcape Wrocêaw in Wroclaw took its inspiration for designing the BMW R 18 Roadster entirely from 1920s and 1930s automotive engineering. The focus was on clear and straightforward lines and, together with a dash of Art Deco, ultimately led to a very clean and equally unique look for the R 18 Roadster. 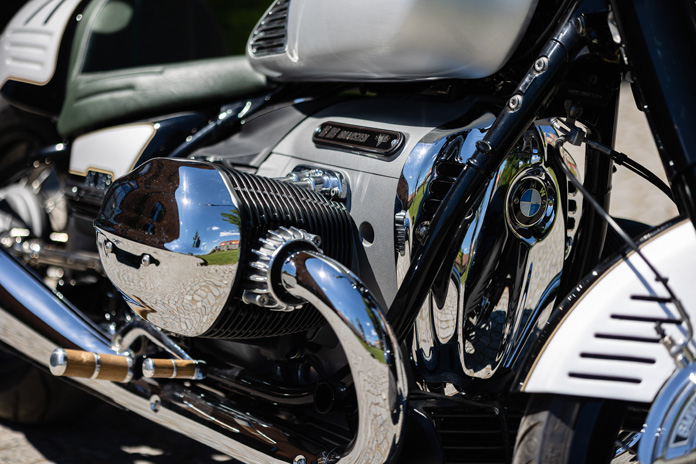 A completely newly developed hump seat bench with additional fuel tank and “Monza Cap” filler neck helps give the rear end of the R 18 Roadster a very sporty appearance, which is complemented at the front by matching cockpit trim and special handlebars. 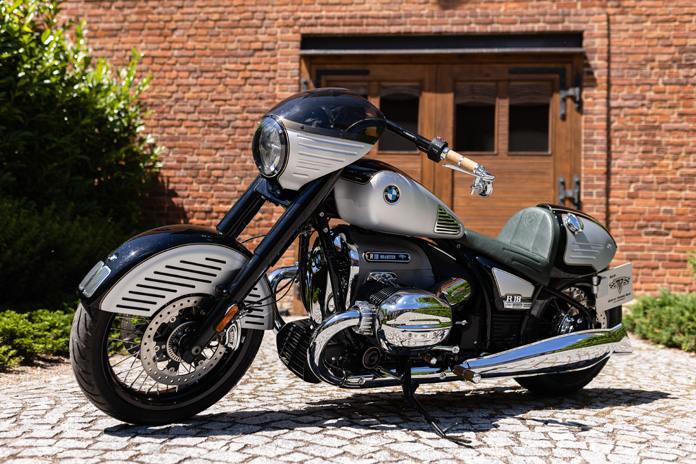 The longitudinal beading in the hump seat bench and fairing are style-defining design elements of this bike. This design language is taken up in the openwork trim elements on the sides of the tank and on the aerodynamically designed front fender, the front of which features the legendary BMW kidney grille hearkening back to BMW automotive construction. 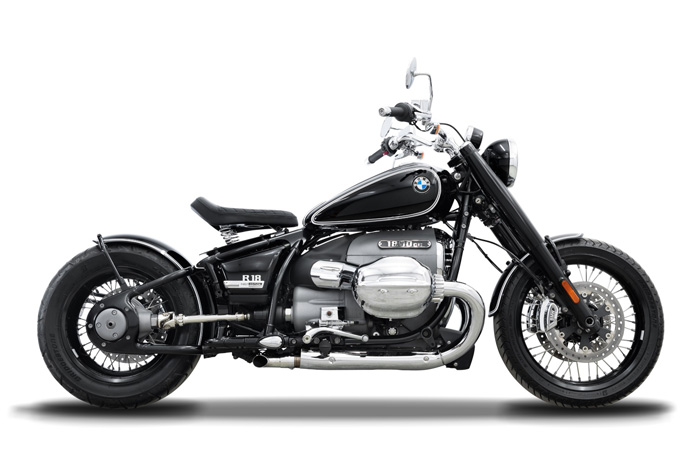 BMW sales partner Smorawiński in Poznań had the 2019 R 18 Concept study entirely in mind when creating his R 18 Roar.

In particular, the Smorawiński team focused on a very light-looking rear section. Harmoniously designed details such as the short rear fender and the swinging saddle with two coil springs make the bike look particularly light. The extremely short, “silencerless” exhaust system in sidepipe style not only generates great sound but also adds to the light look of the rear section. 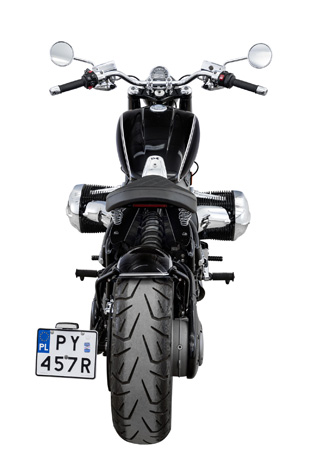 Together with wire-spoke wheels and chrome brake calipers, the result is a very purist R 18 that conveys a purist motorcycle feel. Roar! 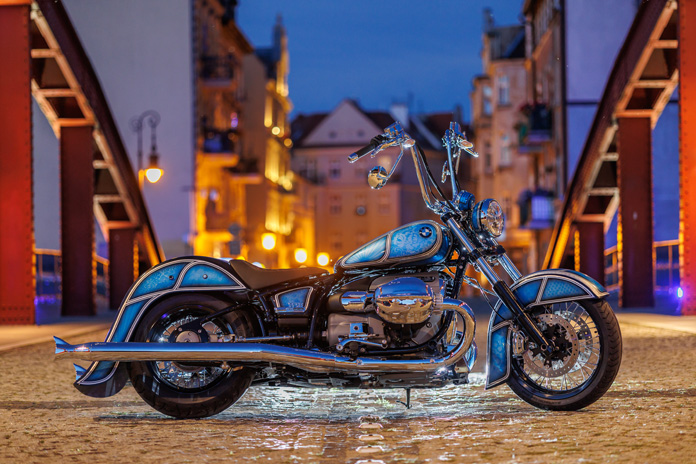 BMW sales partner Inchcape in Swadzim chose the fastest mouse in Mexico as the namesake for its BMW R 18 customizing creation. Voilà, the BMW R 18 Speedy Gonzales. You can well imagine this customized BMW R 18 on the highway in the northern Mexican desert, riding past huge cacti and nothing but a seemingly endless ribbon of asphalt ahead – similar to the adventures of the TV cartoon mouse. 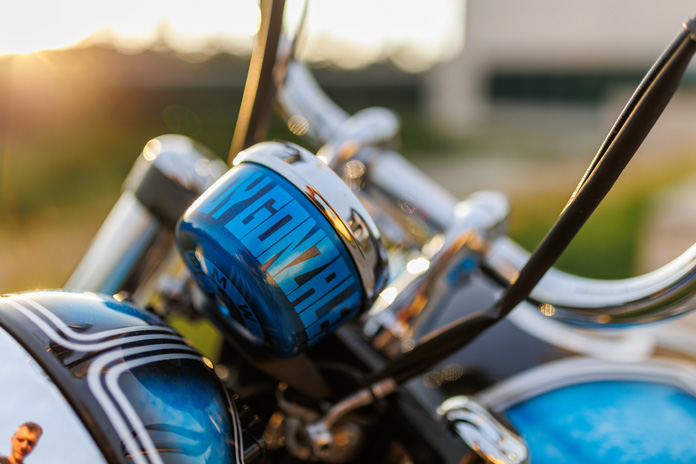 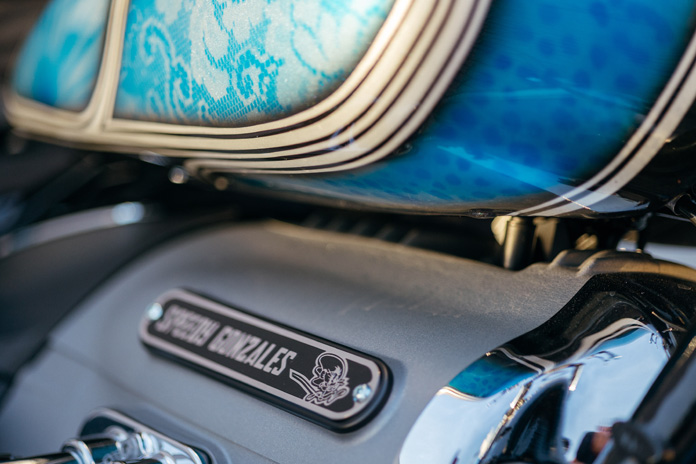 Indeed, the BMW R 18 Speedy Gonzales with an apehanger handlebar and comfortable single seat seems made for riding along never-ending asphalt roads. Inspired by automobile construction of the 1920s and 1930s, the front and rear fenders are powerful and curved. This design feature, together with the tank, side covers, headlamp cover, instrument housing, and long fishtail rear silencers, give the bike great presence. Not to mention its extraordinary paint finish – executed in blue-black with elaborate airbrush technique and filigree lines. 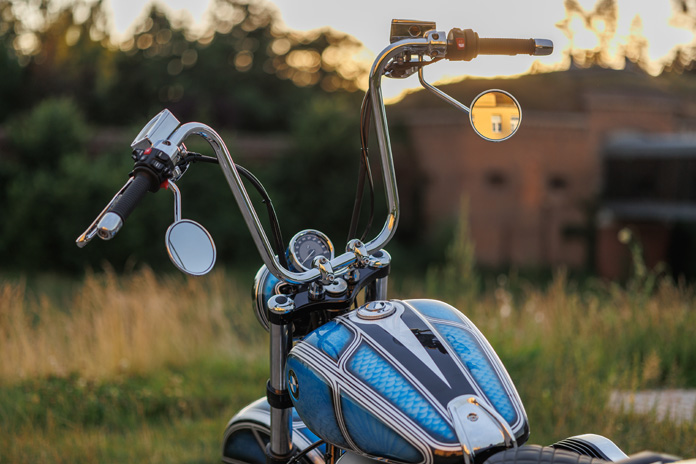 This bike is characterized by absolutely perfect craftsmanship and is a real eye-catcher and feast for the eyes! 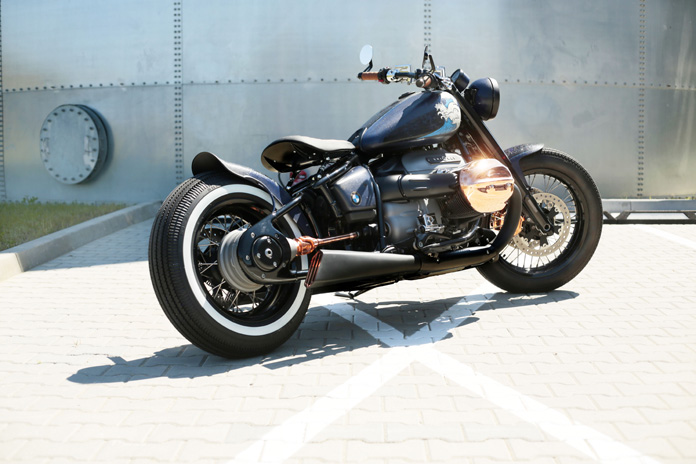 Together with UNIKAT Motorworks, BMW sales partner Team Długołęka initiated the BMW R 18 The Great Wave. The leitmotif here was to modify the BMW R 18 taking inspiration from Japanese art painting and the Japanese style of bobber-style motorbikes.

The bike’s patinized paintwork makes you think that the R 18 The Great Wave has been around for decades and has just been found in a barn. This special paintwork technique was entrusted to the best artist in Poland: Łukasz Elbalenko. The theme of the Great Wave in Kanagawa was chosen because it is one of the most famous works of art from Japan by Hokusia, created around 1831. 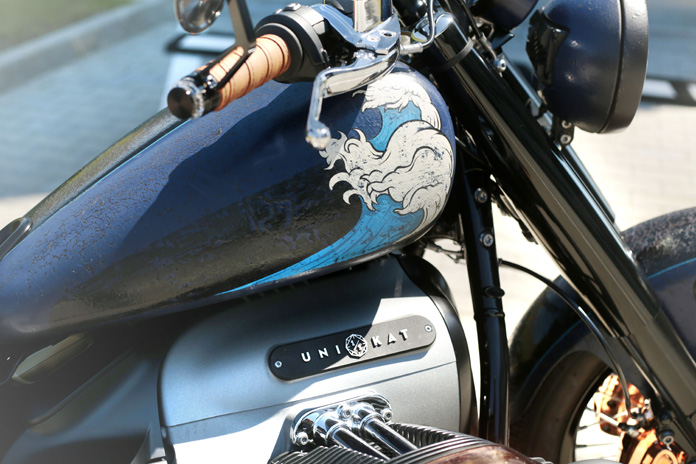 The Japanese bobber style features details such as the rear ducktail fender and the shortened frame rear section with a single seat covered in natural brown leather. Sonorous sound is generated by short, handmade silencers with slotted copper-colored end pieces and hexagonal cross-section. You will also find the exclusive copper coating on the shaft drive, brake calipers and cylinder head covers. 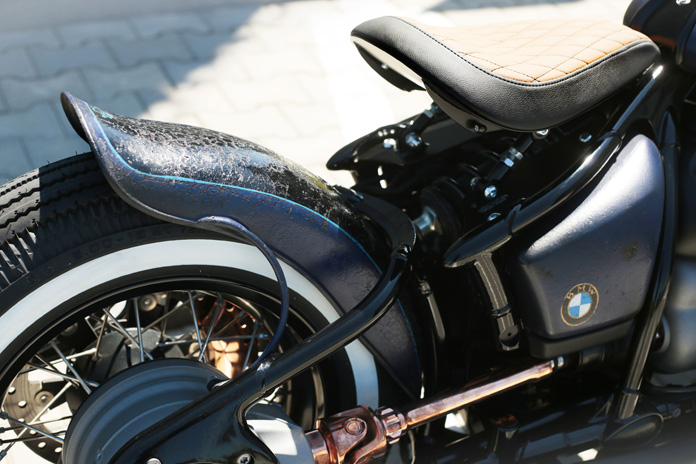 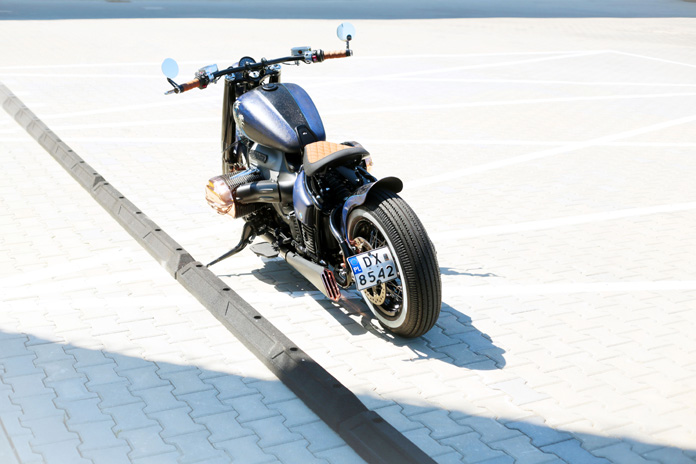