That's really cute, but my FB friends are not random, anything but scooter boy

luckystrike said:
That's really cute, but my FB friends are not random, anything but scooter boy
Click to expand...

suprised you had any "friends" at all...lol
But the beauty of a facebook friend is just pointing and clicking to add friend. Not much commitment required

Terry_Schiavo said:
suprised you had any "friends" at all...lol
But the beauty of a facebook friend is just pointing and clicking to add friend. Not much commitment required
Click to expand...

It's Penthouse Forum online for some.

Hapo said:
...I must admire your tenacity if nothing else...

...it kind of reminds me when Tonya Carr just aboot single handedly got American Bulldogs recognized by the UCK...

...but it was more aboot getting back at Casey Coterie than helping the dogs...

...although you have cherry picked one especially ridiculous statement you also have substantiated what I and others here have been saying all along...

…" it is well-accepted that it is more healthy to eat a plant-based diet than a typical Western diet " ...

Hard to accuse me of cherry picking when the article from which I quoted summed up the results of several other studies.

But it doesn't have to be, as long as you limit what you're shoving into your piehole. Hence what I was saying - there is no magic bullet.

it's amusing that you think you know it all.

Nope. But I do know enough to know when someone's pissing and trying to say it's raining.

Keep doing your veggie thang bowtie, maybe you'll outlive the rest of us

Gonna try cooking some of those burgers this weekend. I'll take pics, give a real review and try no to show my preconceived barf in the pics.

CID said:
Gonna try cooking some of those burgers this weekend. I'll take pics, give a real review and try no to show my preconceived barf in the pics.
Click to expand...

Take a pic of the label, or let us know the sodium content per serving.

Del Taco has some kind of faux meat taco available. I was served several of them from the drive-thru by mistake late at night. Being too hungry to get back in the drive-thru line, I added some sauce and ate them. No biggie, right? Wrong! Very, very wrong....my digestive tract said WTF in a very ugly way.

Costco had some samples of veggie burger things the other day. They were actually quite delicious, in an Uncle Ben's rice kind of way. I told the lady that they'd be really good with a hamburger. That said, if they come up with some fake meat that tastes savory, beefy, bacony, and delicious, with high protein and near zero carbs, priced similar to the cheap beef I usually subsist on, I'm all in.

We have a few vegans in the family, a royal pain in the ass to feed em it is, heaven forbid you take em to a restaurant, they start grilling the waiter on what’s in this and what’s in that and what vegan items do you have

I must say, the vegan attitude is nauseating.

i find vegans are tasteless... unless smothered in garlic...

tinhead said:
Take a pic of the label, or let us know the sodium content per serving.
Click to expand...

sailUSVI said:
We have a few vegans in the family, a royal pain in the ass to feed em it is, heaven forbid you take em to a restaurant, they start grilling the waiter on what’s in this and what’s in that and what vegan items do you have

I must say, the vegan attitude is nauseating.
Click to expand...

ha .. we went to some vegan restaurant in ftw a couple of weeks ago, almost everyone in the place was a smelly hippie, the staff wondered around like zombies, no service, no cares with shitty attitudes.

In Texas and I grew up eating our own beef we know how to cook it and how to buy it! Strip Loin (Wagyu) I did a few of weeks ago. No it did not suck. Slow roasted to perfection on the Primo Ceramic using mesquite note the smoke ring on the outside. 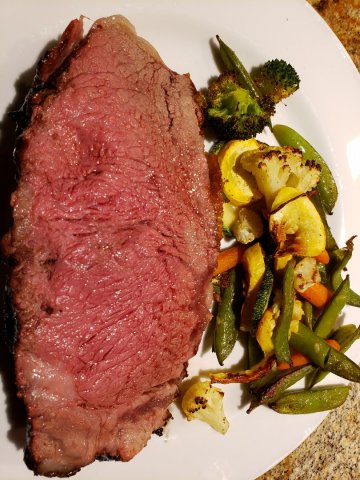 RobBase said:
What "stuff"?
Some of the veggie burgers out there are indeed horrible. The Impossible Burgers they sell at A&W in Canada are really good and almost hard to tell from ground beef.
When you think about it, how much taste does ground beef really have anyway? If it was that great, everyone would eat their burgers plain (like I did almost my entire life), not loaded with ketchup, pickles, lettuce, onions, cheese or bacon.
Click to expand...

LOL then you have not been eating the right beef!! Nothing is better than tasty dead animals! Not everyone lives where they grind beef in the store but if you do-----Buy a whole ribeye (on sale) cut the ribs off and grind it including the fat cap. If you think a veggie burger will taste and melt in your mouth like that (harder to cook and a lot of shrinkage) you need to get professional help.

Eat a lot of ground Wagyu but in all fairness do not eat as much GB anymore now and it really shrinks!!!!!

The all natural grass fed 1/4 cow I just bought from a friend is incredible, theground beef is some of the best I've ever had.

Can't wait to fire up the short ribs!

Just give them beef, they'll never know the difference... 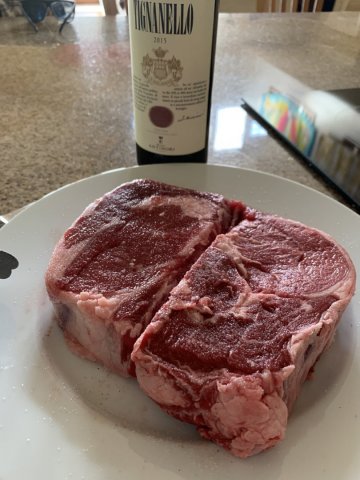 Is that local Maui beef?

not sure, might have been, it was pretty good. We actually export beef here.

Looks really nice. We have a few good local ranchers on this island with statewide distribution. A bit more spendy, but the quality is consistently good. Cooked some local ribeyes for Mother's Day that were a big hit. 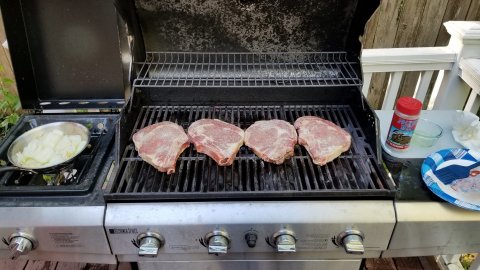 Wretch said:
Why would anyone hit a falafel with a shovel?
Click to expand...

Because its crap chick peas fried in oil.

Not Wagyu but prime pretty which will work in a pinch good. Always look for the perfect marbling then if cooked right will or almost cut with a fork.

So, we went to our neighbor's cookout Saturday night and brought along some of the Beyond Meat stuff........
"brat's and burgers." Keeping in mind that our neighbor is a hardcore deer hunter, (bow, black powder and rifle)
and all of his family and guests are meat eaters, his wife said sure bring what you want we'll grill it also. 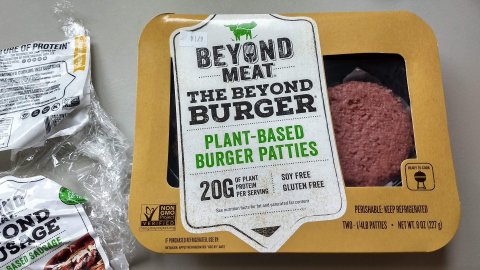 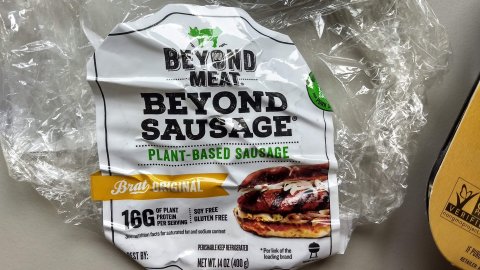 Our neighbor was curious about the Beyond stuff and asked if he could try a burger. Then his step dad and another neighbor also got curious and wanted
to try them. BTW, both are on cholesterol and high blood pressure meds. So we grilled 2 burgers and 4 brats............ 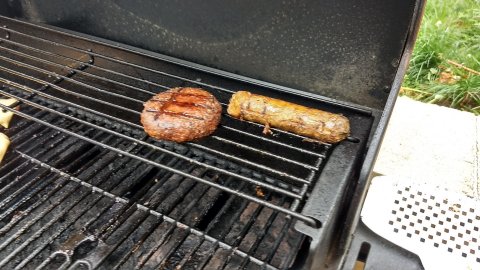 Split one of the brats into quarters and a burger into quarters, they said they just wanted a taste (probably cause they thought they would
be shit), put the burger onto a potato roll with lettuce, tomato and a pickle and they went at it. The brat was just plain on another potato
roll, since we didn't have any peppers or onions to put on it.
I almost cringed when they started to eat them (cause a lot of the previous veggie "stuff" did taste like shit), thinking they'd spit it onto the ground.
Amazingly, all three of them said they were really good. They said they could do a blind test and know it wasn't meat, but regardless,
they said they could eat the Beyond stuff all day and not miss ground beef. The brats were new to me, never had them before, but they
hit my "crave" button, to the point I went out and bought another pack of the brats and the italian sausage. 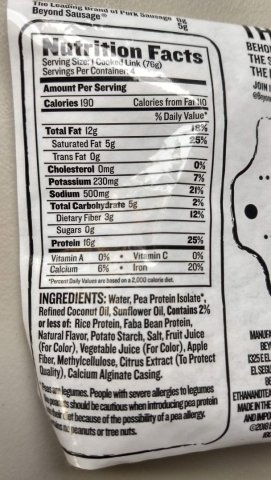 No soy, no gmo, no cholesterol. The saturated fat is from coconut and sunflower oil.
The two neighbors on meds said they would start eating the Beyond products..........witness LS's stock price posts.
OP

Just another day for BYND shareholders...

That valuation is insane.
OP

Does this mean the likes of Pfizer and other pharma companies will be loosing moola on the meatless generation?
Cholesterol meds scare the shit out of me especially when there are many avenues around that shit.
OP

This is going to crash hard, but I'm not shorting it anytime soon. Gonna be a wild ride. Reminds me of TLRY.
OP 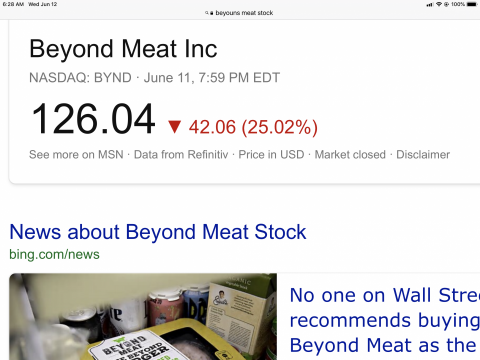 The insanity appears to be back in full swing...

still not a sign of meat on this thread
OP

They just announced upcoming sales of the burger stuff but packaged as bulk ground beef. As in make your own burgers, tacos, meatballs, spaghetti sauce.

Lol at people showing their meat

Beyond Meat pops on new 'ground beef' product
You must log in or register to reply here.
Top Bottom