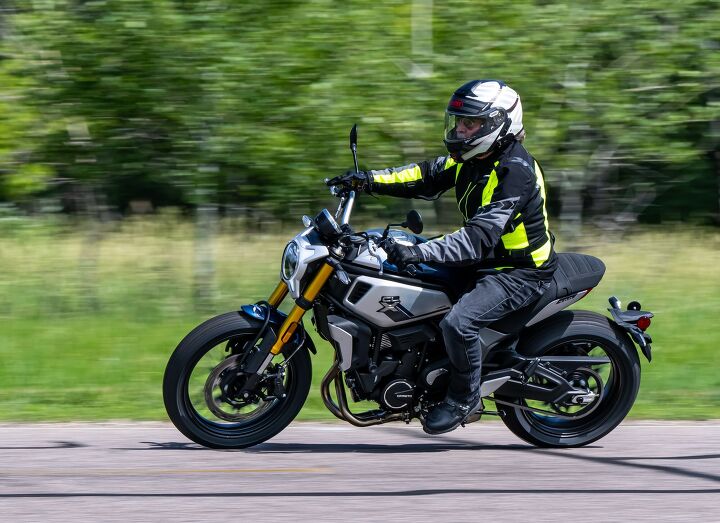 After years of KTM owning this class with its 390 Duke and (390 Adventure), there’s a new kid in town – new in the US, anyway – in the form of the CFMoto 700 CL-X. It’s only fitting, really, since CFMoto’s Chinese manufacturer and KTM have a decade-long history together. That same Chinese OEM had a pre-existing relationship with Kawasaki also, and if CFMoto’s 700 CL-X isn’t powered by an engine eerily similar to a Versys 650 parallel Twin, I will eat my cat. In fact, the 700 CL-X is powered by a Versys twin that’s been stroked by 4mm, to 83 x 64mm dimensions – a thing Kawasaki’s never had the decency to do. That takes it to 693 cubic centimeters, and a claimed output of 74 hp at 8,500 rpm (and 48 lb-ft at 6,500 revs). Which makes this one a tad larger than our usual Lightweight winners, but for $6,399, how can you not supersize it? 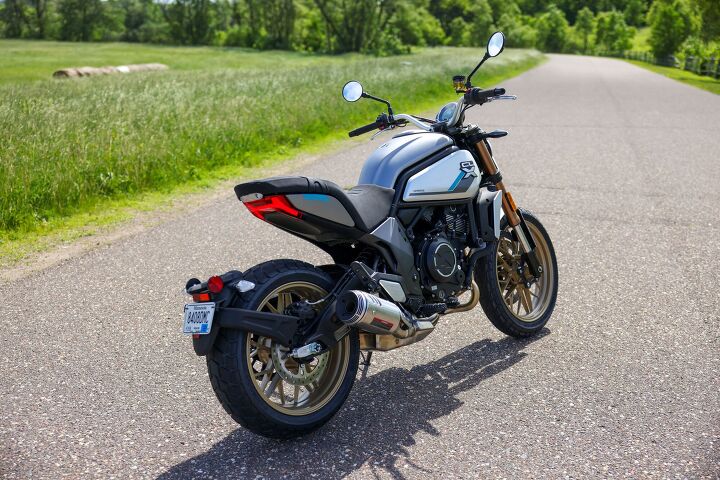 It feels almost as fast as a Yamaha MT-07 blasting down the ⅓-mile front straight at the “testing facility” CFMoto took us to on day one of our little press junket, near their lovely hometown of Plymouth, Minnesota. Not only is it a sweet little engine, the rest of the package is surprisingly nice, too: CF is on a mission to change minds about Chinese motorcycles, and after our brief encounter with, I think, seven of its new bikes, I’d say it’s well on its way. The new 790 KTM-powered 800 Adventura is even more impressive, but wasn’t available in time for this year’s MOBOs.


2022 CFMoto 700 CL-X/ 700 CL-X Sport Review – First Ride​
The 700 CL-X gets a tasty, steel trellis frame nicely accentuated by brushed aluminum gas tank panels, amongst lots of other components that do nothing to expose the low bottom line. That includes ABS, a slipper clutch, LED lighting, daytime running lights… and, yes, electronic cruise control. Pinch me. Adjustable KYB suspension at both ends is well-tuned to the application, which CF says adds up to 432 pounds when the 3.4-gallon tank is full.

Rolling on knobbyish Pirelli MT-60 tires, I came away with the impression of an excellent little workaday motorcycle that’s kind of a cross between a Versys 650 and a Ducati Scrambler. Standard-bike ergonomics and a broad, comfortable seat (for two) had me really enjoying an exploratory all-day ride around Milwaukee and Lake Minnetonka – in addition to having a blast around CF’s little test track the day before.

There’s a 700 CL-X Sport, too, which gets 17-inch Pirelli Angel GT tires, dual Brembo Stylema front brakes (!) and lower clip-ons instead of a handlebar; I preferred the non-Sport. And there are about five more smaller, even less expensive CFMotos in the line-up too.

The catch was that these 2022 models aren’t yet CARB-approved for sale in California. But, word just in is that CFMoto anticipates CARB being finalized on its 2023 CL-X bikes early next year. CF says there will be new colorways – a blacked out version and a blue CL-X – and traction control will also be standard equipment for 2023.

Also, the 800 ADVentura is now named Ibex 800; dealers will start taking deposits for it in January for delivery in late spring, 2023. 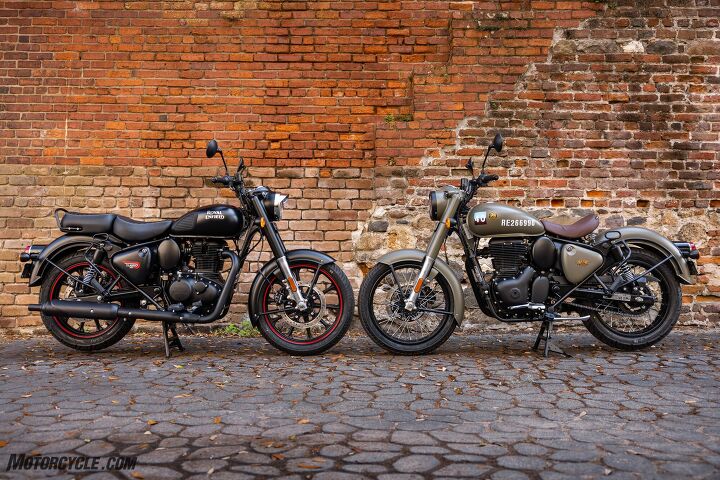 The Royal Enfield Classic 350 impressed as soon as I laid eyes on the new version. The attention to detail on the Classic 350 is appreciated – maybe even more so due to its $4,500 price tag. You also get to choose from nine different paint schemes spanning three trims – how often does that happen?


2022 Royal Enfield Classic 350 Review – First Ride​
The Classic 350 delivers on all of its promises. Everything you need, nothing that you don’t. The machine looked great in the Dark and Signal trims that we got to sample back in April, with nice styling touches that elevate the machine’s presence. The bikes feel tight and well-assembled (even if some components like the handlebar clamp seem puzzling), the transmission is smooth as southern bourbon, and the 350 mill is as sweet as a Savannah praline. Its small stature and 31.7-inch seat height make it easy for most to toss a leg over too.

If you’re looking for some elegant retro styling and a simple powerplant to learn how to ride and/or work on, the Classic 350 fires on, well, its one cylinder, making it our runner-up for best lightweight/entry-level motorcycle of the year. The historic brand that’s been around since 1901 keeps on impressing well into the 21st century with solid new model offerings.