A History of Horsepower: The World’s Most Powerful Motorcycles over the Decades

The Scottish have found it hard to trump their invention of Whisky. Like Fender with their Stratocaster or Apple with their iPhone, once you change the world, it’s bloody hard to do a decent encore. Luckily for the Scotts, they had an engineer called James Watt who just may have gone one better than that sweet, sweet malt liquor—he’s the guy who coined the phrase ‘horsepower.’

Horsepower refers to the amount of work it takes to lift 550 lbs (or 250 kgs) one foot in one second, which is supposedly around what a decent late-18th Century horse can manage. Watt’s idea was a simple one: to provide some solid stats so that steam engines and horses could be fairly compared.

Little did Watt know that his unit of measurement would end up keeping motorcyclists awake at night while their mental gears turned with ideas for creating more and more of the precious stuff. Of course, whether you are looking to win the TT or go fast as hell on the salt flats, you can never have enough. So here’s a brief history of all the two-wheeled, conventionally-powered beasties that had enough horsepower to get them into the record books. 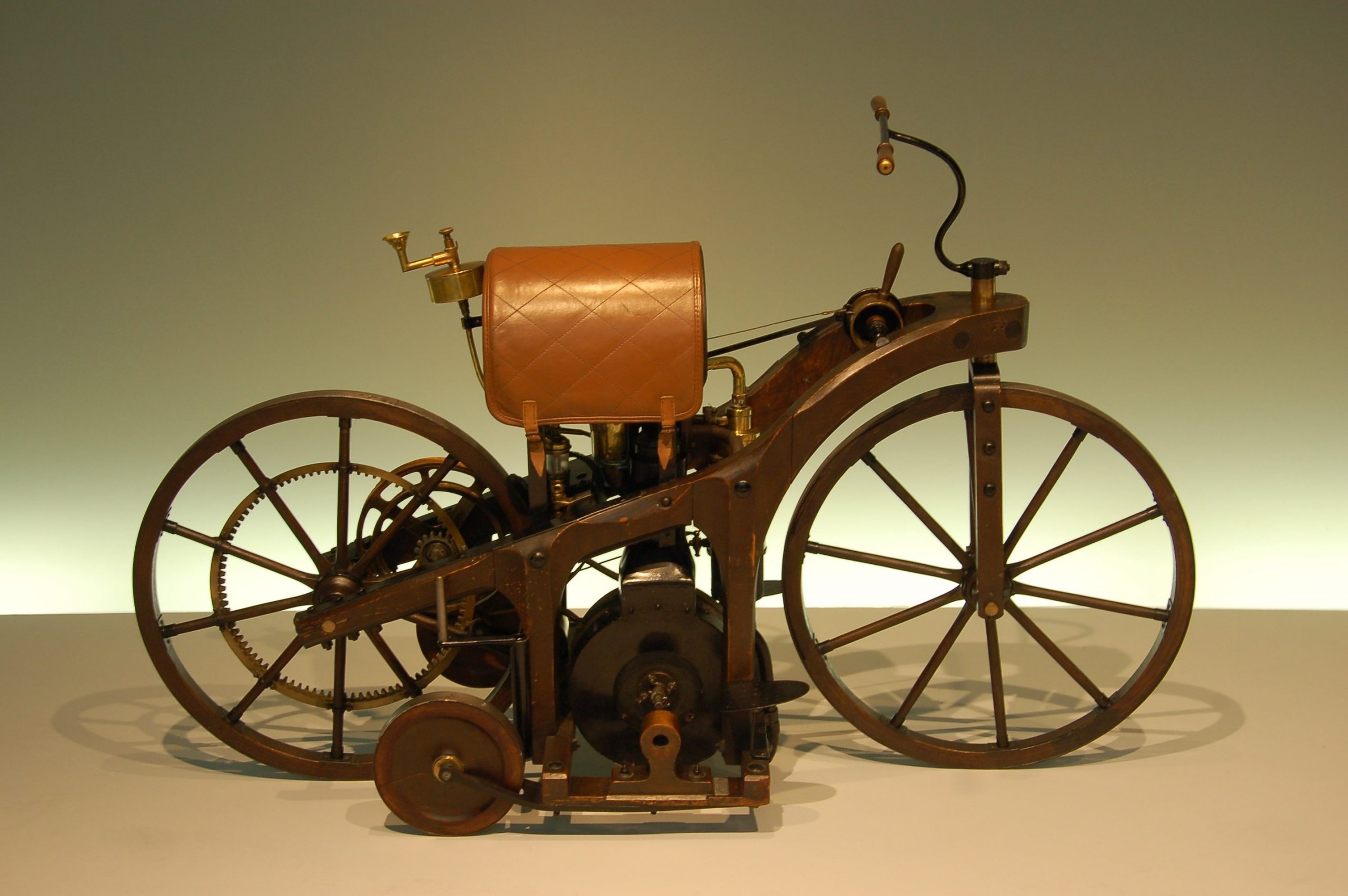 Half a Horse: The Early Days of Motorcycle Horsepower​

After a few noteworthy steam contraptions, 1885 saw the world’s first internal combustion motorcycle, famously created by Gottlieb Daimler and Wilhelm Maybach and called the ‘Reitwagen.’ Daimler (of the famous car company) is still referred to as “the father of the motorcycle,” and rightly so.

Unsurprisingly, this unsuspended and brutally rough ride wasn’t exactly brimming with tire-burning capabilities, so you probably wouldn’t want to ride one today (even if you like to buy vintage motorcycles). In fact, it had just a meager half-a-horsey of power—but since it was the only motorcycle in the world, it was by default also the most powerful.

But fear not, because as humans are want to do, speed bugs were caught, thrills were had, and sleepless nights led to new inventions a mere decade-and-a-bit later that looked a lot more like the bikes we know today. From the beginning of the 20th Century, Royal Enfield and Triumph in the UK, and Indian and Harley-Davidson in the US saw the potential of these newfangled ‘motorized bicycles’ and ran (or should that be rode?) with the idea. 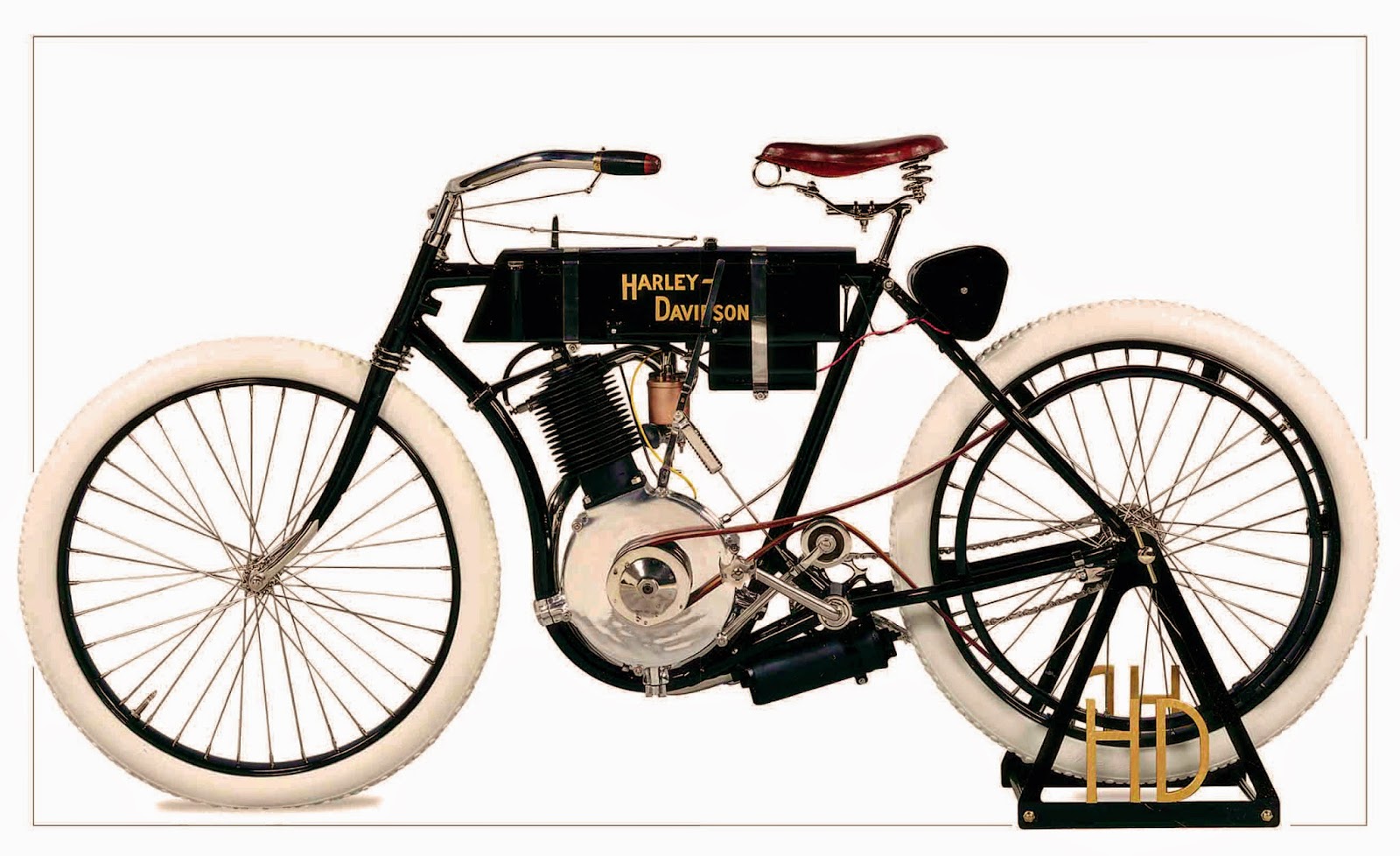 A real piece of eye candy for those who love retro motorcycles, the most powerful of these first-generation bikes was the Harley-Davidson Model 1. With a hefty four horses, the thought of a machine that was half the size of a horse but with four times its power must have blown rider’s minds—as did the fact that they could ride the thing at 35 mph (55 kmph), a speed that only the best racehorses could better.

A handful of years later, Nottingham’s Brough Motorcycles—run by the father-and-son team of William and George—decided it was time to up the ante a little. And by a little, I mean by a whole damn lot. Taking the idea of a Saville Row handmade suit or a Purdey custom rifle, Brough started producing motorcycles using JAP engines that would give owners anywhere from 30 to 50 horsepowers (at least for those cashed-up enough to afford one).

The well-known pinnacle of these bikes was the still-stunning SS-100, which managed to break the 100 mph mark in various configurations—including a stunning ‘Alpine Grand Sport’ pre-war model that had an incredible 75 horses and a world-record speed run to pop on its mantelpiece. 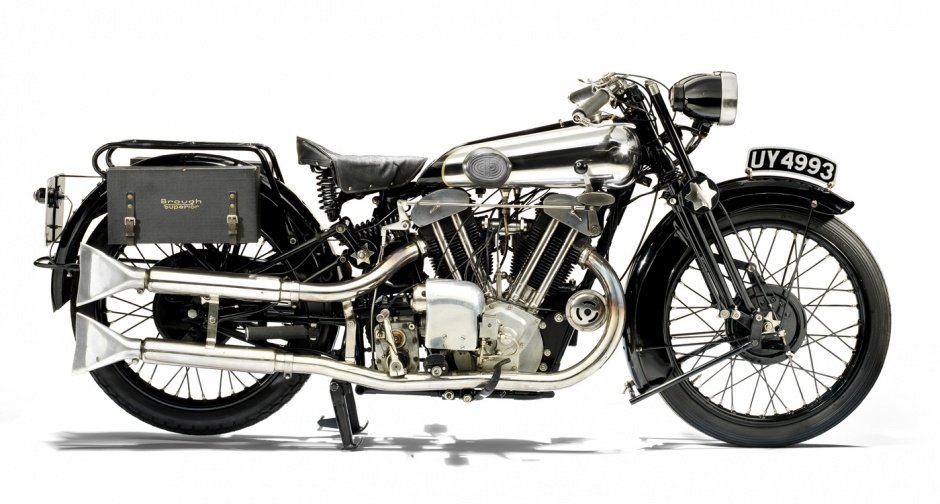 Post-War Motorcycle Horsepower: The Power of Free Will​

Of course, WWII put a stop to such speed-and-power-based frivolities, but it sure was a great testbed for internal combustion technologies. As the fog of war cleared and America opened its eyes to the prosperous 1950s, a new bike began to throw some serious shade across the world’s horsepower stage.

Powered by a kick-ass 998cc v-twin, the Vincent Black Shadow managed to propel Rollei Free to a literally-eye-watering 150 mph. Surprisingly, the bike put out a similar amount of horses to the best Brough had to offer, but adding post-war tech such as new suspension systems and the company’s superior understanding of aerodynamics gave riders like Rollei a big damn edge. 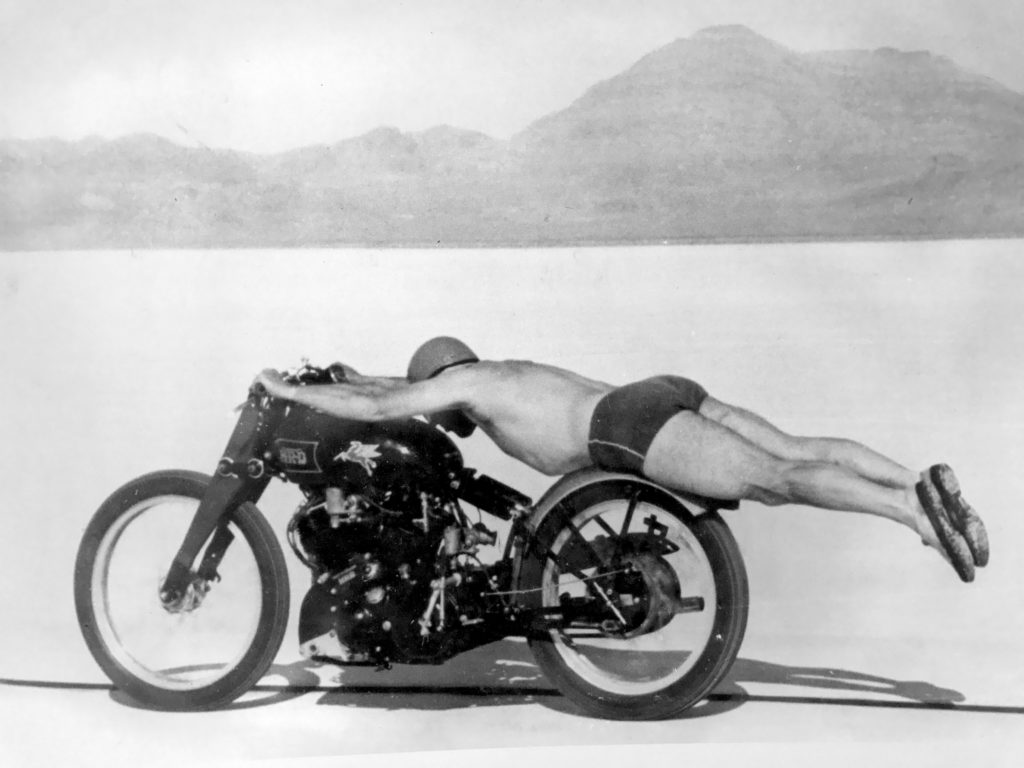 Image via The Vintagent

By the late ’50s, we started to see a clear fork in the road for motorcycle power figures. With setting land speed records becoming a priority for many daredevils, Bonneville saw the rise of streamlined bikes like the Triumph Gyronaut X-1 and the NSU Delphin III, on which speed was really only limited by the size of your wallet and gonads. Triumph went for a more-is-more philosophy with their Gyronaut, getting 110 horses out of two warmed-up TR6 engines. 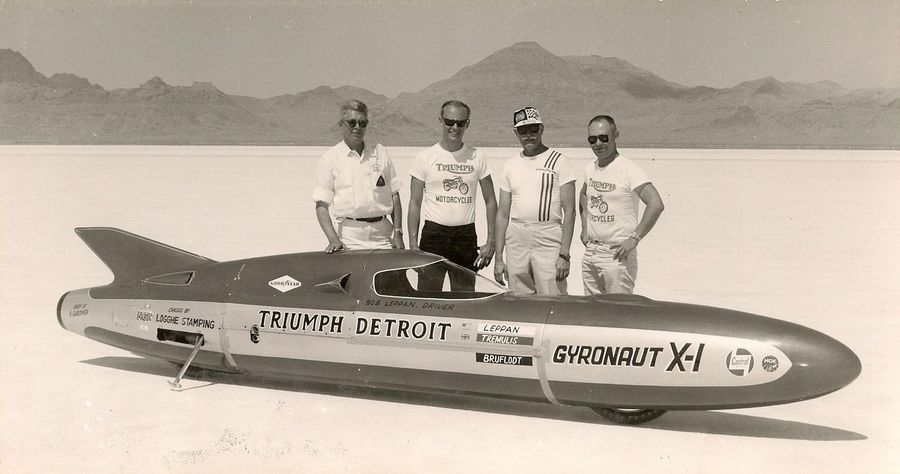 Motorcycle Horsepower from 1960–1990: The Japanese Invasion​

In the dying moments of the 1960s, Japan planted its first big flag in the hallowed ground of moto power and speed with its new Honda CB750. It’s sometimes called the fastest motorcycle of that decade, much to the BSA Rocket 3’s chagrin (and with only 47 horses, that must doubly hurt). Meanwhile, at Bonneville, a new Harley streamliner was going hard with a 265.492 mph run from what we can logically assume was about 130 hp. 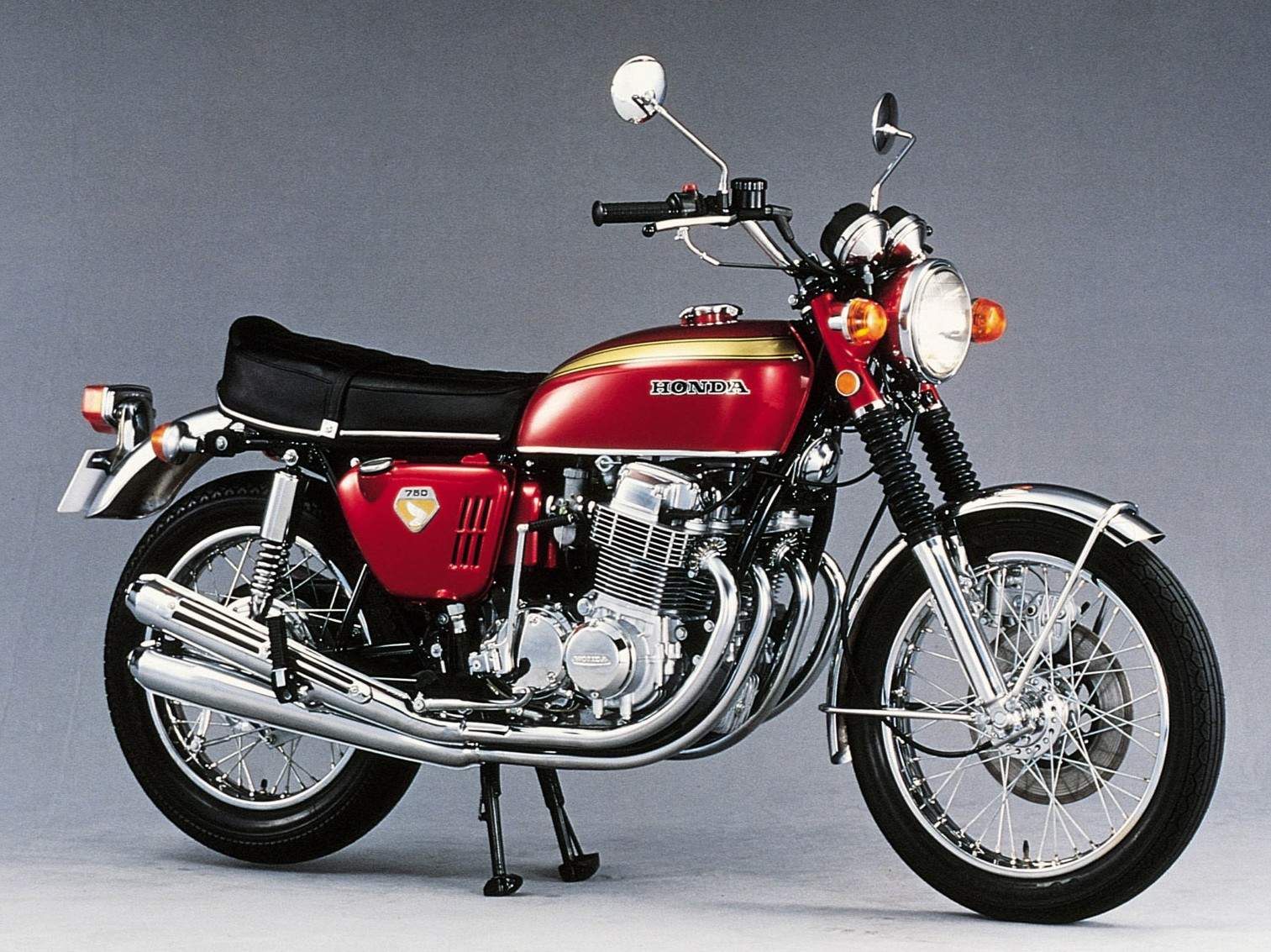 When it came to horsepower through the 80s, the big hitter was the same bike made famous by Tom Cruise in Top Gun—the dreamy Kawasaki GPZ900R. Meanwhile, in all its new-wave, plastic-y glory, the Kawasaki Ninja put out an epic 120 hp and was also known as the first production bike to break 150 mph right off the showroom floor. 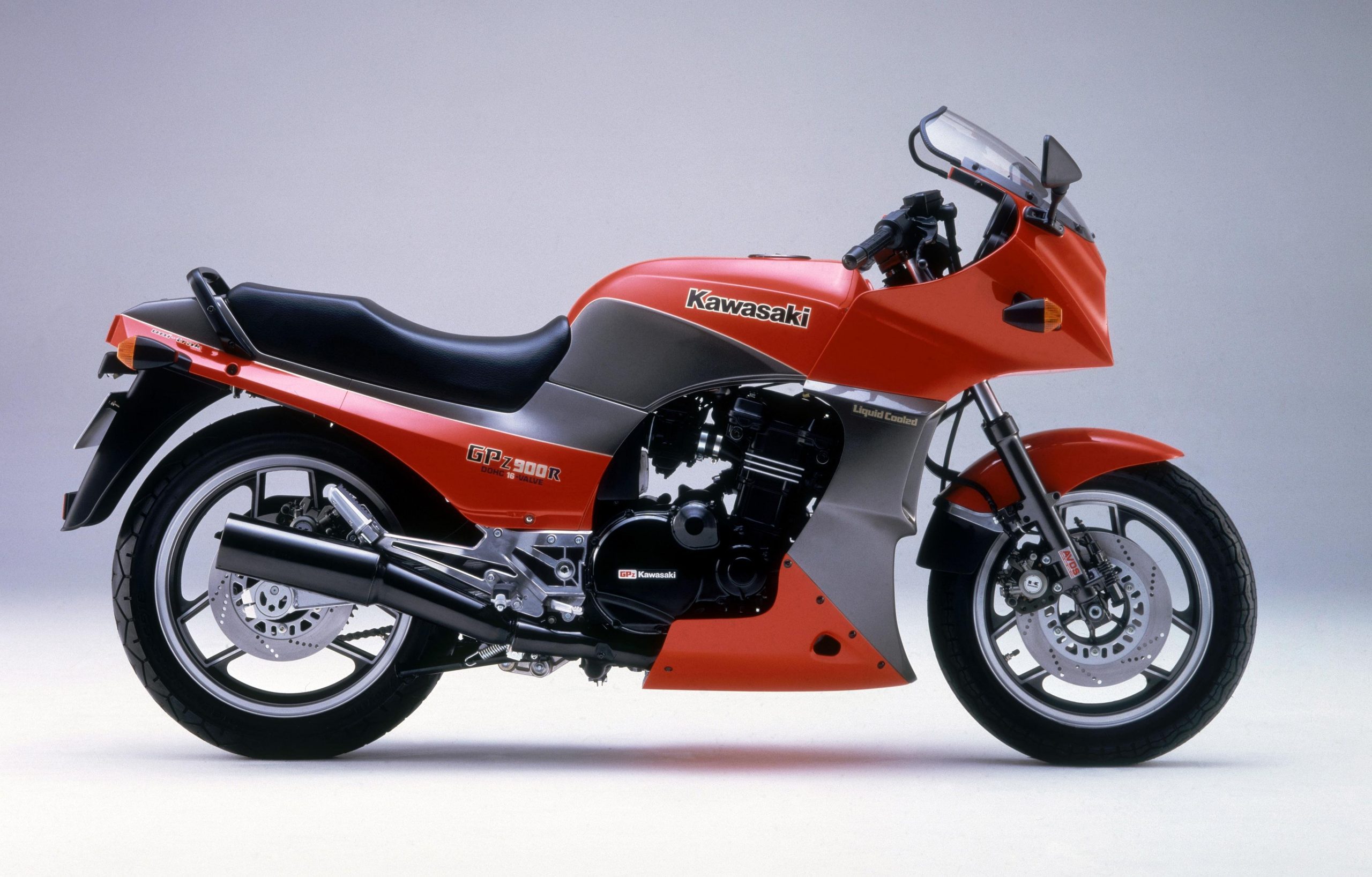 The Falcon and the Go-Man: Motorcycle Horsepower Since 1990​

Although things began to heat up on the road, the speed of motorcycles on salt took a little hiatus in the 80s and 90s. Of course, 1999 saw the legendary release of the Suzuki 1300cc Hayabusa. With a whopping 170 hp from a technically unimpressive yet rock-solid inline-four, this Japanese tour-de-force would remain the undisputed king of power until it was knocked off its perch by the groundbreaking 193 hp BMW S1000RR in 2014.

It’s also worth noting that, unlike the BMW, the Hayabusa was enthusiastically adopted by quarter-mile kids, thanks to its fondness for power mods. That practice continues to this day. 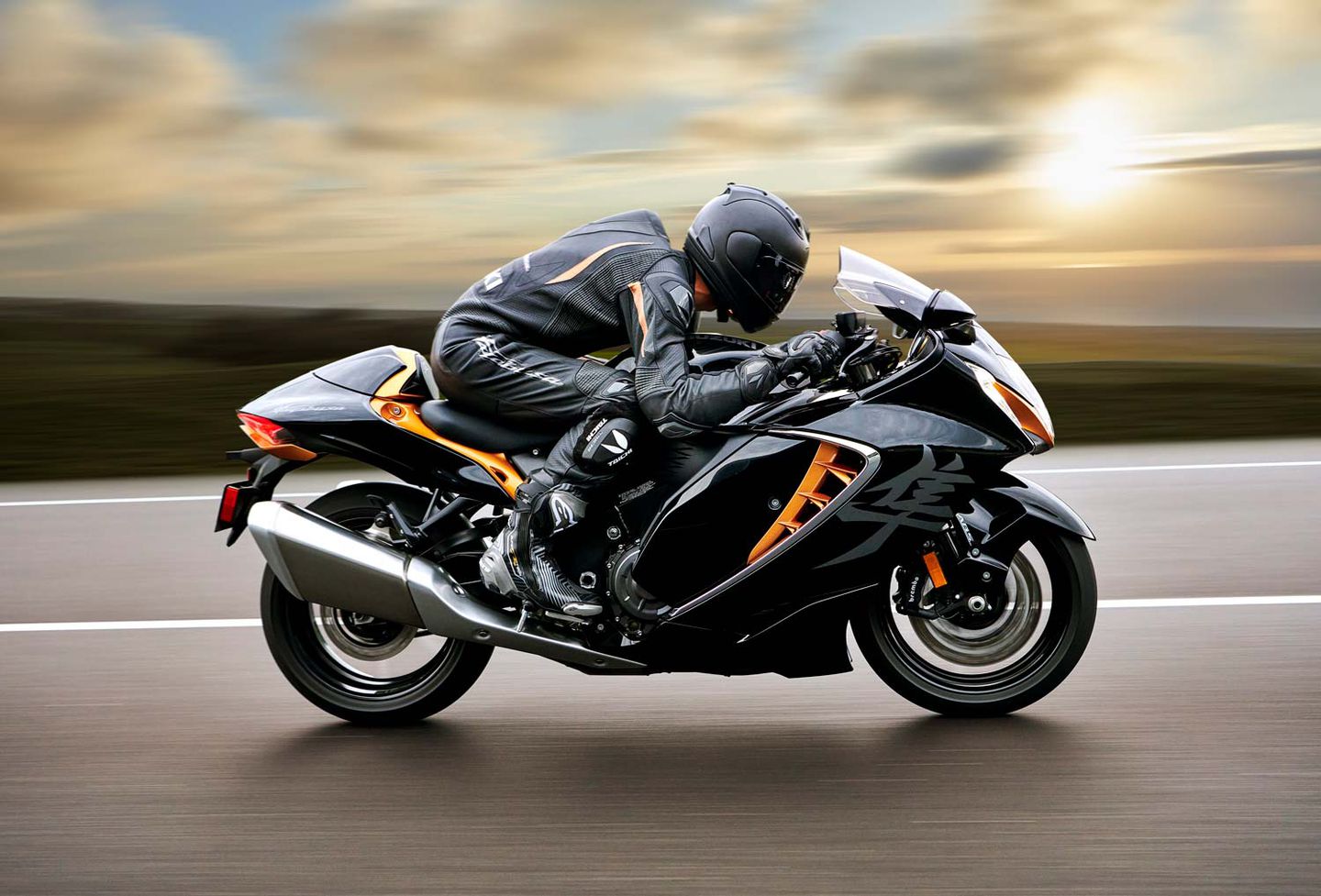 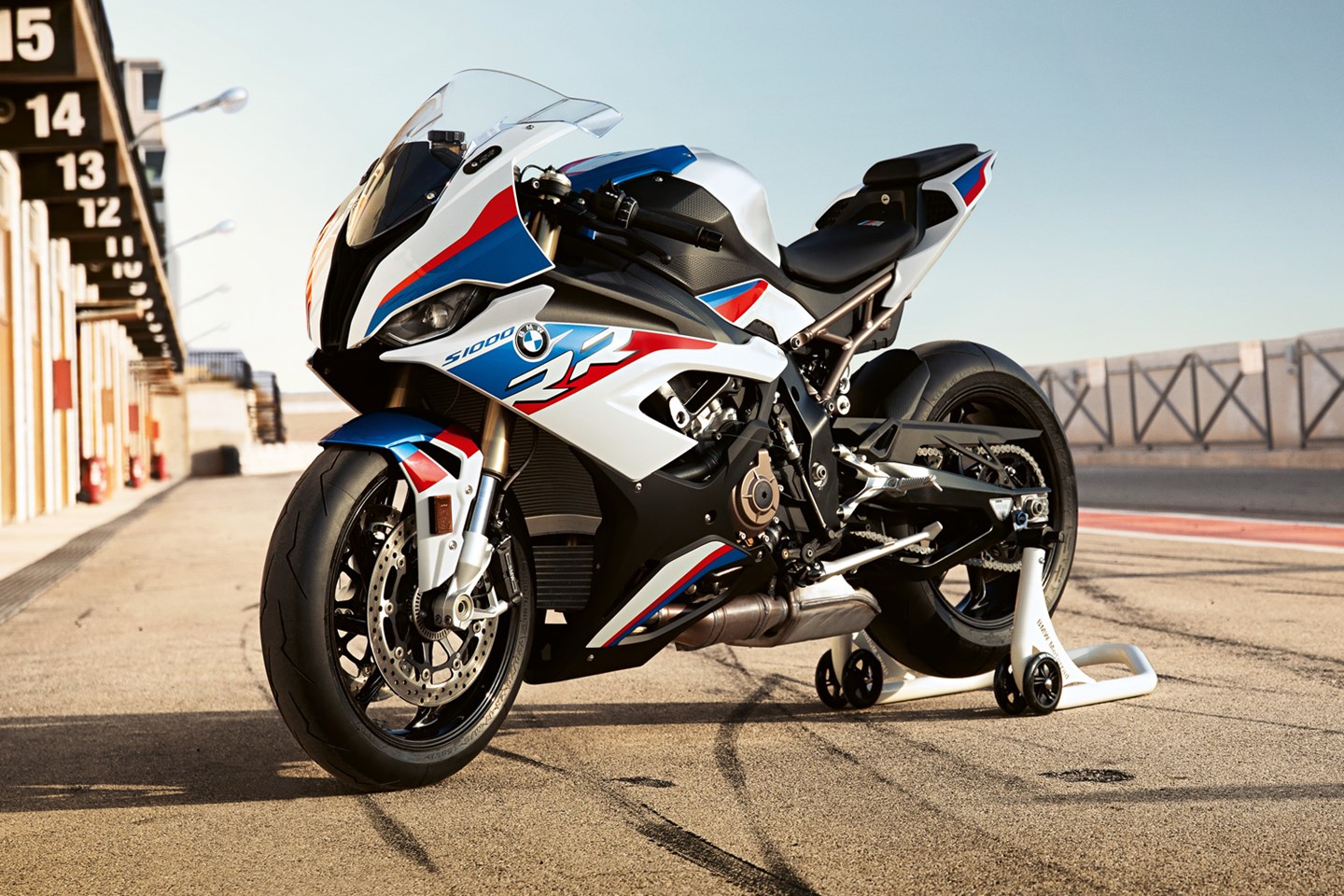 In recent years, a gaggle of production bikes have entered the fray to compete for the title of most powerful. The flashiest of these contenders is probably the spaceship-like Kawasaki Ninja H2R (this time sans Tom Cruise).

With a nutso 310 bhp achieved using a supercharger and some pretty extraordinary engineering chops, the little green and black rocket can make it all the way to 400 kmph—if you have the guts to test it out, the hand muscles to hang on, and tires that can handle the incredible forces applied at those speeds. 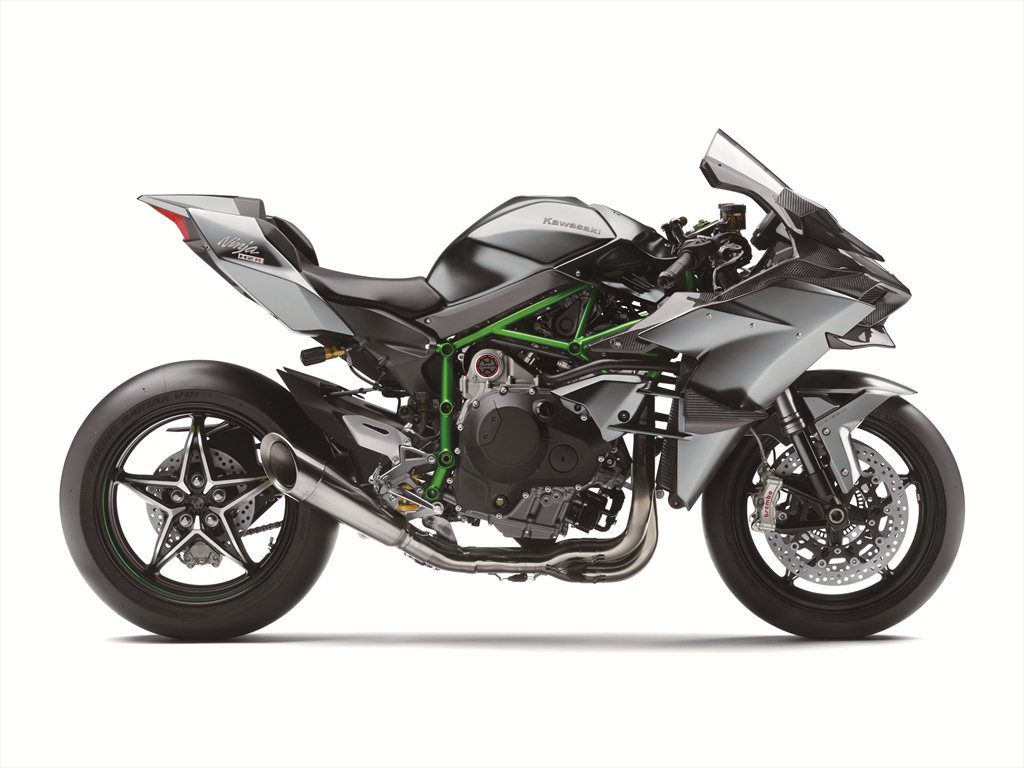 Think that’s it? Well, think again because the Japanese Hayabusa makes one last appearance in this list—and unfortunately, it’s a pretty damn tragic one.

Returning to the strip, a non-production, non-road-legal ’Busa with a turbo the size of a washing machine and an almost unbelievable 1000 hp broke the 500 km/h barrier in 2011. And you thought doing the ton on your liter bike was a thrill? Pffft. 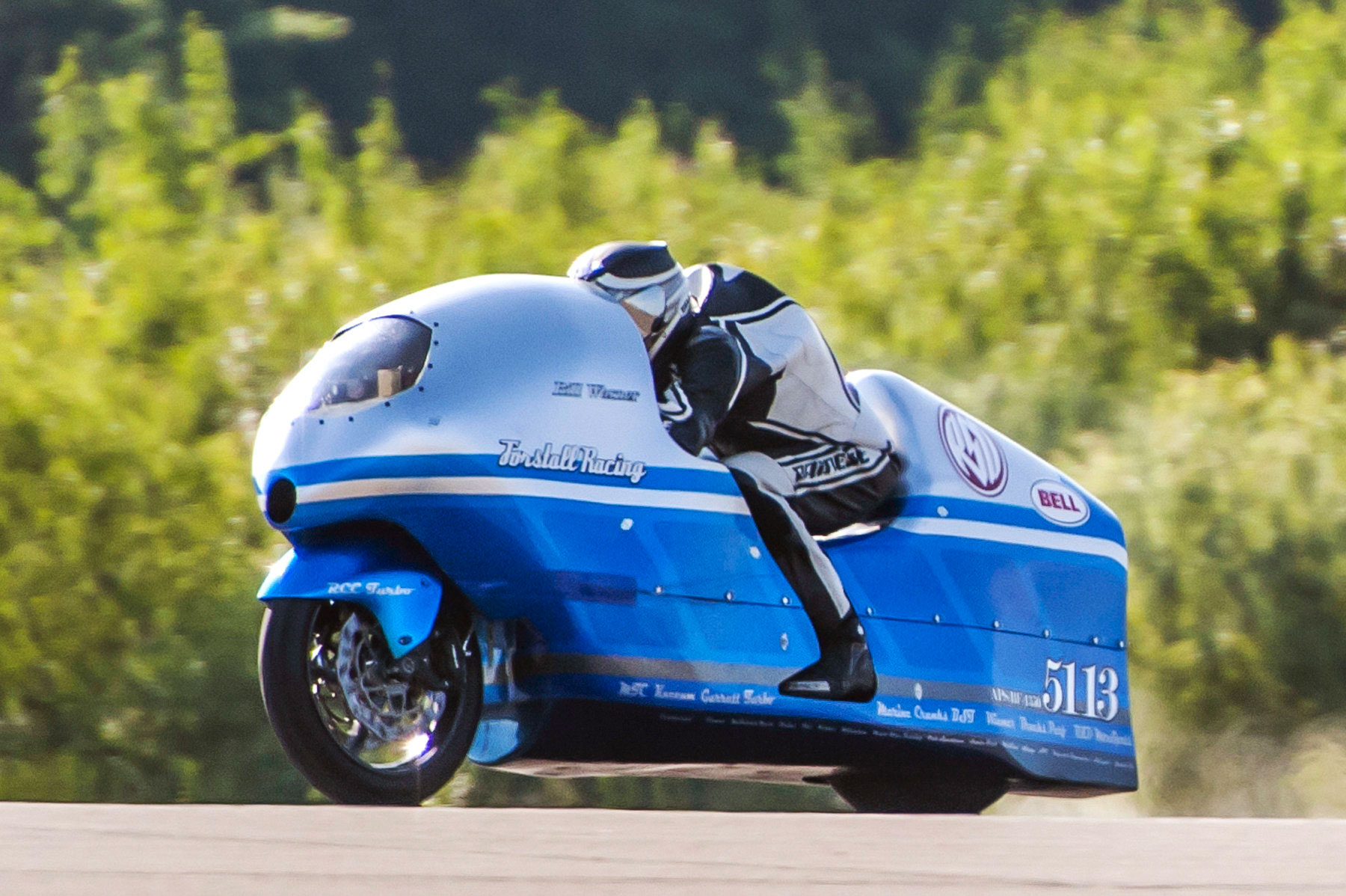 Riding that bike was an entirely fearless pilot named Bill Warner, who was attempting to break his previous record from 2013. Bill lost control at 285 mph and was seriously hurt; he sadly passed away an hour later after being rushed to the hospital. He’d no doubt be happy to hear that his record still stands to this day, and we couldn’t think of a better, more brave rider to own it. Rest in peace, Bill.

The post A History of Horsepower: The World’s Most Powerful Motorcycles over the Decades appeared first on Motorbike Writer.