A favor to ask

My daughter's retired teacher has a dog running for something and they need online votes. They have helped me and it would be appreciated if you'd drop by and cast a daily vote for a couple of weeks.

Hello Family, Friends and Neighbors.
Our lovable Charlie is entered in The Leader newspaper's Loveables Dog Contest. The link below will take you to the voting site. You may vote once a day until Monday, Jan 28 at 5PM. If you have more than 1 computer please vote daily on each one, as well as iPads and Smart Phones. On behalf of Charlie thank you for your vote!
Love,
Susan & Daniel
http://www.theleadernews.com/?p=4870
Click to expand...

Charlie is a rescue dog she found at her school, he was in bad shape but has had the best care for the past 7-8 years. 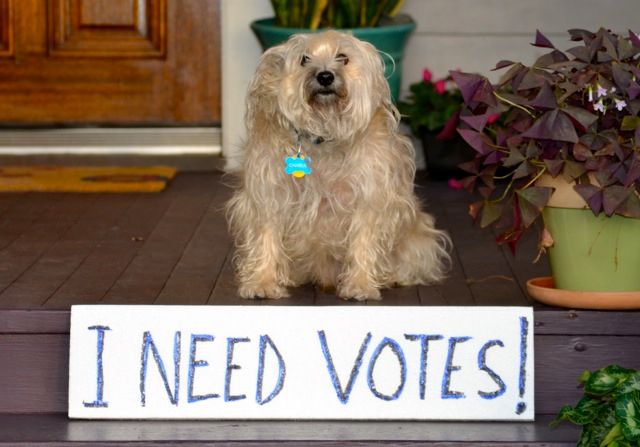 bump it tomorrow for a reminder so I can get another vote in..

Charlie looks a little different in this picture... confirmed vote!

With a Damn Big Hose

How many votes you want?
I can run a script lol

ahhhh, looks like they talley every day, last night it was like +44 now today when I voted it was +3 then +4?

I hope someone didn't jack into the site and erase all his votes?

I voted for him, but what that dog really needs is a haircut- damned hippie.:p

I cannot even place a vote, for back in 1958 my parents & I had this lovely boxer dog which was given the best of attention, exercise & so much more. This dog had to be put away as it was suffering form SDB.

Even with us moving to another part of Canada another dog was not one of the family for being a full time fruit orchardist I simply did not have the time. Now with a fruit orchard, so along came two cats so we took care of them in a much easier form. Still when my late Mother was with breathing problems the specialist said to get ride of the cats so that was the end of them.

A change from the orchard (well actually two orchards I had to work on) so that was the end of the cats as much as we liked them in their strange ways.

We moved closer into town with just a normal home, fense & such. It was decided with my lat father with alzhimer's disease then no dog as it was not the time for her to handle. Once bother of my parents passed away then I knew much as I like dogs, I could not give them the car needed. So no additional dog.

Now we have one female that is at the h/gun section, but once she had a loose dog running around the the streets it was accidently killed. Took her three months before she started to shoot with us along with a Border Collie we all think so much of. I think she has a full fence at the back & spends a lot of time with that dog to ALSO always when driing her car or truck the dog is with her & at the gun range, it is treated like a dog should.

The advantage to her Border Collie is that it is in her car in a shaded place, but can hop out it it wants to along with a lot of open acerage it can travel around & not be nare any roads, while the Trap shooter give it the best of care.

She has been divorced three times so no one else to take care of the dog she likes so much.

Personally I cannot fathom all the work she must give that dog so it can get the esercise, the food to you name it. For she is a bit like me in being a loner.
Last edited: Jan 27, 2013

TwistedMister said:
ahhhh, looks like they talley every day, last night it was like +44 now today when I voted it was +3 then +4?

I hope someone didn't jack into the site and erase all his votes?
Click to expand...

we miss you Smitty, what a character you were

sailUSVI said:
we miss you Smitty, what a character you were

Don't worry Smitty Jr is still here.
You must log in or register to reply here.
Top Bottom